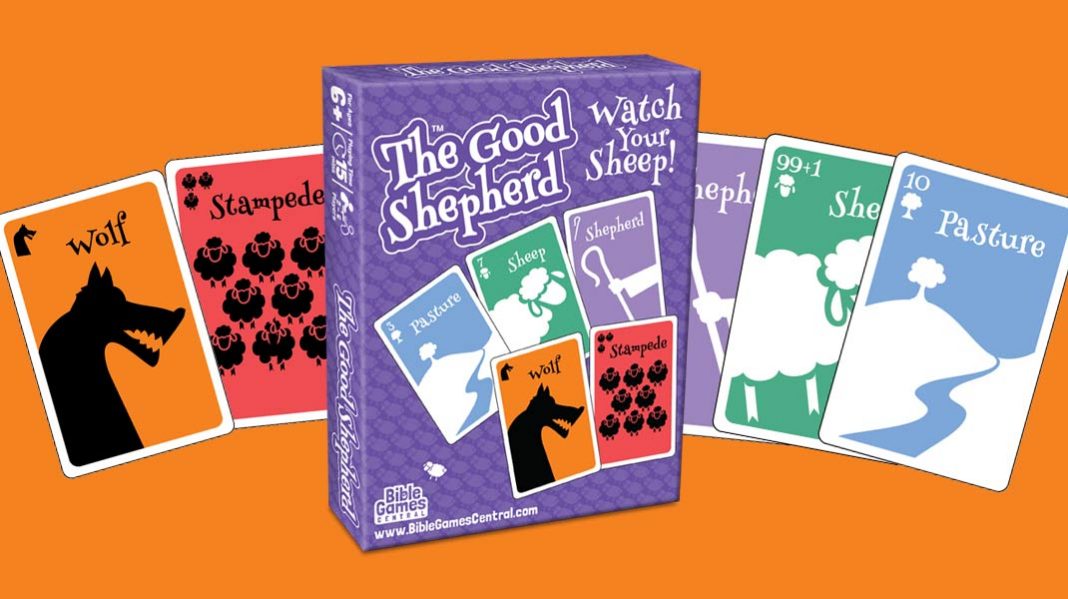 The Good Shepherd is a bit of a take-that style card game where players are attempting to score the most points from their herd of sheep. Players will have to watch out for stampedes and wolves who will attempt to pick off their flock. Carefully utilizing your shepherds can help protect your sheep as you seek to guide them to greener pastures.

In this Biblically-based game, players will be dealt 3 cards from the deck and will always have a total of 3 cards at the end of each turn. The gameplay is relatively simple: On your turn, you draw a card then play a card. Cards consist of Shepherd, Sheep and Pasture cards of various values, Sparrows, Wolves, Stampede and Sundown cards.

The game ends when a specific number of Sundown cards have been played.

The concept for the game is that God is the good Shepherd, he lays down his life for his sheep—and if one gets lost, he will go searching for them. That theme is somewhat loosely translated since players serve as both the good Shepherd and the wolf, but you rarely reference the theme when playing the game. Ultimately, the victor will likely be aided by their ability to hold their opponents at bay while experiencing a fair amount of luck. The game’s strategy can be a little mean since you are constantly working to strip your opponents of their valuable points.

The box claims 2-6 players, but I’d highly recommend at least 3 join in. Part of the fun is choosing a player to attack with your wolf and stampede cards and a 2-player game eliminates that anticipation. The game plays fairly quick, but often still felt like it ran a little long (especially at 4-player). The tension just wasn’t there when a player was hit with a stampede card and had to completely refresh their entire hand. Often I felt like I was rehashing the same actions turn after turn. I think having a few more Sundown cards in the deck would help solve this and create more urgency to protect your hand and maximize your actions.

The Shepherd cards are nice, but with a hand of only 3 cards, it was tough to ever really get anything going. Anything in your hand not directly giving you points ended up being more of a distraction you were quick to discard. This really limited the gamesmanship since you could never build up a hand that would allow you big points or fire power to take out your opponents.

Overall, the game was easy enough to learn and provided some strategic decisions, but players ultimately end up relying too much on luck for success. It felt like you’re generally at the mercy of the deck and the negative actions never really impacted our games dramatically. While I understand that this game is directed at a younger audience, I still think there are more engaging card games for this demographic. Bible Games Central has better games available.

Find out more info at BibleGamesCentral.com