Home Game Reviews Review: The Girl and the Robot 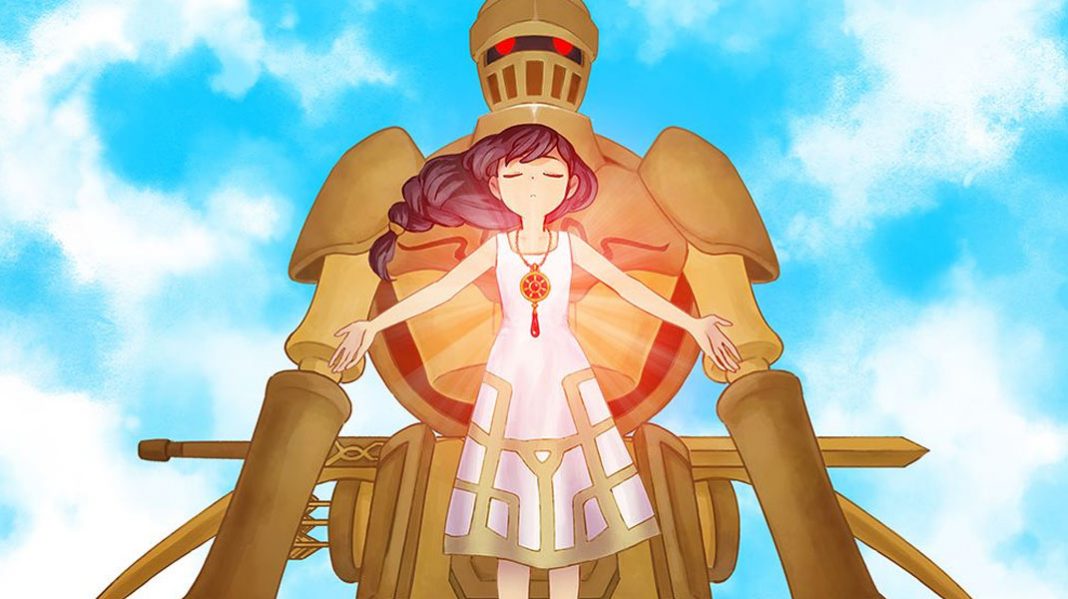 The Girl and the Robot is a cooperative card game based on the Playstation game by the same name. In a quiet kingdom tragedy strikes and a mysterious demonic presence comes over the land. Soon all the kingdom’s inhabitants are imprisoned by an evil queen and her army of robots. A young girl and rogue robot manage to break free, working together to avoid the evil queen, her army of shadowy robots and then the demons roaming the countryside (seems like a lot going on). The theme mildly ties in, but it’s not essential to enjoying the game.

The Girl and the Robot can be played anywhere from 2-4 players. In the two player game, one person takes on the role of the young girl while the other is the evil queen. Allies can be established in the 3 or 4 player games with a good and bad robot joining the fold.

The game play is simple. Each player takes turns playing cards and resolving their actions. At the end of each turn a player must then draw a card from the deck. If that card happens to be a demon the player dies. Each player must use their hand to play abilities, actions and weapons in an attempt to stay alive. There isn’t hit points, there’s no going mano-a-mano… you’re just hoping the other person gets killed by a demon before you do.

Each player starts the game with 5 cards and a basic weapon. The weapon can be used to fend off a single demon – more can be drawn, but they are few and far between. With each turn, you’re pushing your luck, drawing a card hoping to avoid the next demon. The best defense is to use your cards to manipulate the draw deck through a variety of action cards, working your best to keep the demon cards at bay. Once successfully fending off a demon, it’s placed back in the deck face up… mocking you as you slowly get closer to drawing it again. At this point you’re essentially using the demon cards as tools to stick it to your opponent. Problem is, onne miscalculation of your hand and the demon ends up right in your lap.

There are a variety of cards that allow you to sort through and shuffle the deck in a variety of ways to put yourself in the best position for success. Of course your opponent is doing the same thing creating a sort of tug-of-war. Each character also have a variety of asymmetrical abilities (triggered by ability cards) that provide additional ways to protect yourself, your partner and further manipulate the deck. The abilities vary depending on the player count – with a completely new set of abilities to help your partner if you’re playing cooperative. In a bit of a twist, each player will first play cards – viewing, rearranging or manipulating the deck in an attempt to defend themselves. After they’ve chosen the cards to play they then draw from the deck. The 2 player game is full of plenty of strategy, but cooperatively, you’re able to compliment your partners abilities, allowing you to quickly strong arm your opponent into an unfortunate encounter with the ever lurking demons.

The game comes in a small box with a nice, foam insert. The box is sturdy and the cards are standard quality, but the game has a good feel to it.

The artwork isn’t top-notch in my opinion, but the style does have it’s own charm. It’s light, whimsical and airy and will likely appeal to a number of players.

I had never heard of the Playstation game this is based on, so I had no preconceived ideas or opinions coming in. That being said, I was pleasantly surprised by this little card game. It is a simple game where you’re ultimately trying to avoid a demon cards in the deck, but the game play is tight and engaging. I did enjoy the push-your-luck and hand management aspects of the game. With the ability to play any number of cards in your hand – it become very tempting to greedily overplay leaving you with little to nothing to protect yourself with on your next turn. The publisher claims to have loosely based this on game of Russian roulette and it was fun not knowing when the next demon will pounce. OR knowing when it would and working to avoid it. I am fan of both push-your-luck and take that card games and I found myself amused at some of my more sneaky plays here. Overall, the rules are simple and the game isn’t complicated by any means. It’s ultimately a quick, fun, 30-minute diversion that I’ll likely introduce to my gamer friends when we have some down time.