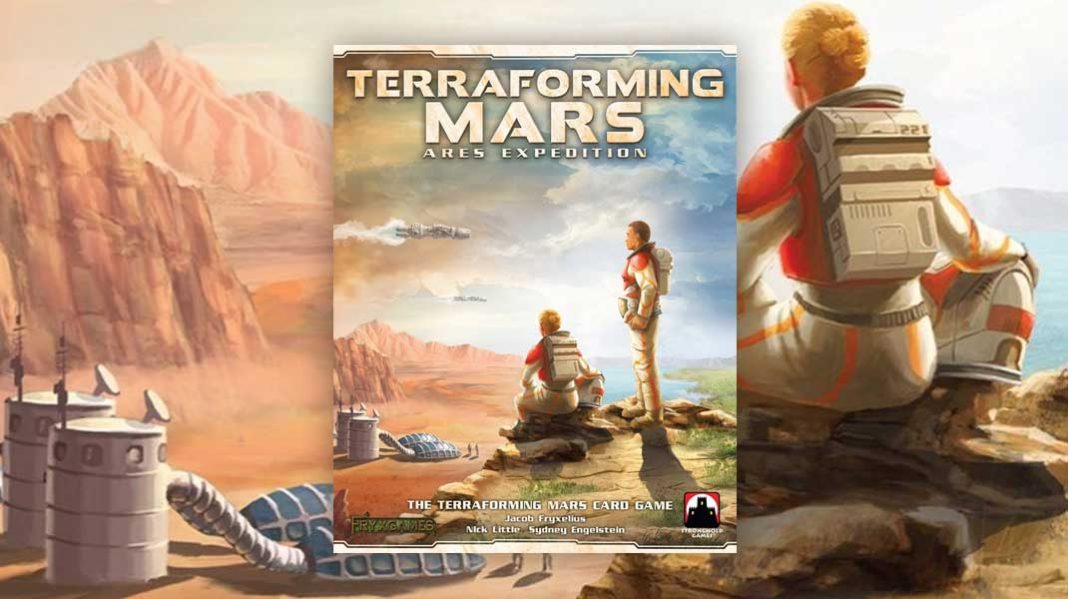 As one of a number of competing interplanetary corporations, your goal is to create a habitable (and profitable) environment on the planet Mars. Investing in programs that promote breathable oxygen, warmer temperatures and life-giving water will guarantee high returns as the terraforming process moves closer to completion. Do you have what it takes to win the race to establish your corporation as the most profitable in the pursuit to establish life on Mars or are you just a terraforming poser?

In Terraforming Mars: Ares Expedition, players will corporately activate phases which will allow them to build new projects, take special actions, receive production and do additional research. Finding the right combination and balance to your projects is essential for your corporation’s efficiency in this engine building adventure.

Players begin the game by receiving an asymmetrical corporate identity which provides the player a starting credit/money total along with additional player-specific abilities and a handful of project cards.

The game takes place over a series of turns in which players individually choose to activate 1 of 5 unique phases. When activated, each phase allows ALL players to perform a specific action with the activator earning a bonus. If multiple players activate the same phase, they still only get to perform that phase’s action once each.

So what are these phases and what do they do? The phases dictate things like which project cards can be built or activated, which actions can be taken as well as resource production and research.

Terraforming Mars is an engine building card game which means every card played has the ability to benefit you on a later turn or provide added benefits (such as extra resources or discounted costs) when paired with a previously played card or series of cards.

Performing the action phase allows players to activate any card with an action (gaining credits, resources, etc) as well as perform any of the game’s standard actions. These standard actions require players to trade resources in exchange for improving the oxygen level, planet temperature and establishing oceans. The pursuit of these 3 areas not only trigger end of game conditions, but also provide players higher terraforming ratings (which contribute to your credit production as well as points at the end of the game).

Players may also take the production phase which earns you money and resources based on your company’s current production totals or activate the research phase which gives you the ability to draw additional project cards.

Once the end of game requirements are triggered, players add up their victory points and a winner is declared.

Terraforming Mars: Ares Expedition plays 1-4 players. The solo mode gives you a limited number of turns to meet certain objectives, but the gameplay doesn’t really change. I actually really enjoy the solo mode here because it’s so easy to get into and there isn’t a ton of added upkeep to bog down your play.

I don’t really see too many differences in any of the player counts. More players leads to a slightly longer game, but since you’re encouraged to resolve each phase simultaneously, the turns go by pretty quickly for groups who know what they’re doing.

There’s also a co-op mode where 2 players play together, but again, the rules stay pretty similar.

This game seems to definitely maintain its integrity at any of the player counts.

I am reviewing the deluxe edition of the game so your copy may vary when it comes to components.

Overall, I’m pretty happy with the components. The duel-layer production boards are nice. They hold your resource cubes nicely in place and there is enough room for everything you collect. While I appreciate the game board being smaller (which equals to the game box being smaller), it isn’t quite big enough for everything that goes on. The ocean tiles are easy to knock around because they’re in such close proximity and the tracks don’t really provide enough space for all the cube action. This hasn’t ruined my enjoyment of the game, but it is kind of annoying.

The cards all have a nice finish and feel great in your hands. There’s also 2 cube trays that are a lifesaver. Since you’re moving so many cubes around during the game it’s so nice to have these plastic trays to keep things organized. They also benefit a ton when it comes to setup and cleanup – huge bonus points!

The artwork is really good here. Each card features unique artwork and it’s all really well done. The graphic design throughout is ok, but it’s colorful and tech-y and it gets the job done.

Outside of the small-ish game board, my only complaint is that the red cards look pretty orange. Not a huge deal – but it did throw me off at first.

Finally, the rulebook is both good and bad. It definitely gets the job done and I appreciate that they clearly separated each individual phase. That being said, it’s a little half baked and I feel they could have cleaned it up just a tad to make it less wordy and more visually helpful.

I couldn’t be happier with Terraforming Mars: Area Expedition. I really love almost everything about this. I’ve avoided comparing this to the original board game up to this point, but some of my excitement exists in how well it compares to the original.

The gameplay is really quick and smooth here. Each round is triggered when players all simultaneously choose their phase—it’s really simple and clear. And then all players simultaneously resolve each phase together. In a game about efficiency, I love the efficiency built into the game’s process.

The strategy here is awesome! There are over 200 project cards in the deck, they’re all unique, and all clearly communicate its benefits in both icon and written form. I’m not sure if I’ve played every single one of them yet, but I just expected a couple to lead to some debate… has not happened. With so many cards, every game is going to require some variance to your strategy. Every one of my games has been dictated by that game’s unique card draw which means you have to stay on your toes. I LOVE how the cards interact. The engine-building aspect is done really well here. Master TM crafters are going to be able to chain cards together in really exciting and fun ways.

There is also a nice amount of depth to the gameplay. There is a lot of luck when drawing cards, but being able to make the most of the cards available and turn them into productive pieces of your corporation requires a good amount of finesse and can be really satisfying. Wise players should still be able to stay competitive even with the luck factor working against them by creating an engine that cycles a ton of cards through their hands.

If you’re looking for player interaction… you’re not going to find it here. This is essentially a solitaire experience where the only engagement depends on card requirements relating to global achievements (how many ocean tiles have been turned over, etc.). That hasn’t stopped me from enjoying it when playing with other players, but interaction in euro games doesn’t mean that much to me to begin with.

There are some minor production issues with the board, but I really like the size of this game. It’s compact and the storage seems to be really well thought out. So I’m willing to compromise on those minor issues to keep my nice, tight Terraforming Mars package.

I’m a huge fan of this edition of Terraforming Mars. While it doesn’t do everything the original board game does—it does more than enough and even adds a fun element with the phase selection.

I have had some resistance to this strictly based on the theme. This is pretty hardcore sci-fi theme, but it’s done in a very logical, realistic way. I suppose the theme could turn you off, but the game play, for me, really transcends the theme.

I’ve never been a super fan of Terraforming Mars, but I’ve always enjoyed the game. With this new edition, the quick setup, accessibility and shorter game length makes this something that’s going to get regular time at the table. In fact, I’ll probably end up selling my old version of the game. Whether it’s in a group or solo, this is a game that hits a lot of the right notes for me. So if you’re looking for a deeper engine-builder that’s quick paced and think-y… I don’t really think you can go wrong with Terraforming Mars: Ares Expedition.