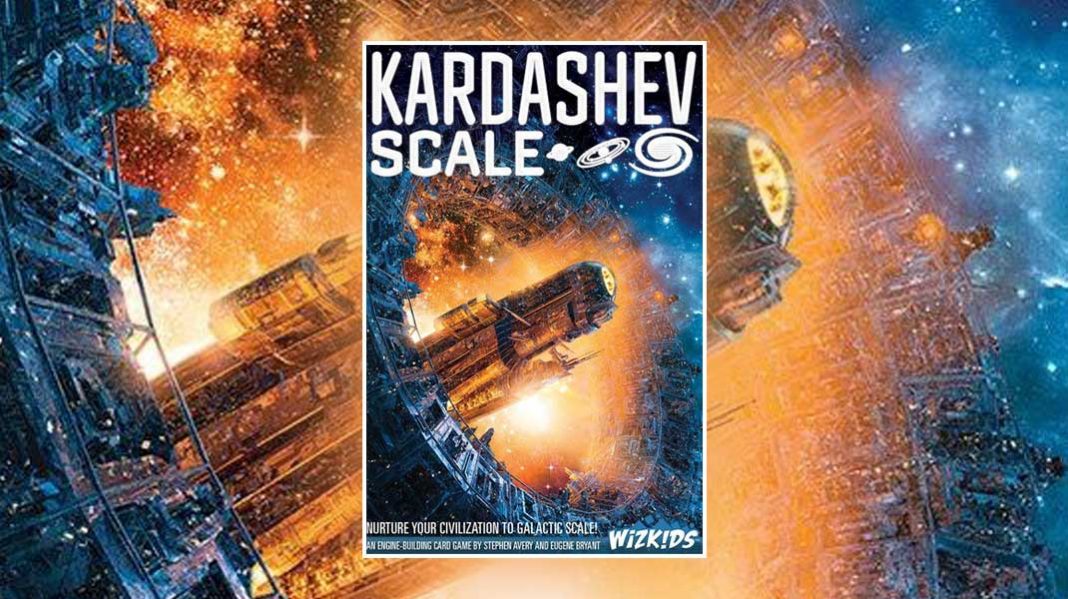 Developed in 1964, the Kardashev Scale represents a method of measuring a civilizations technological and cultural advancement on a cosmic level based solely on the amount of energy they use.

Using this hypothetical approach as a backdrop, players will take on the role as individual cosmic civilizations competing to achieve the greatest technological achievements while progressing through 3 civ types (planetary, stellar and galactic). Players will take actions triggered by a Rochambeau mechanic (rock—paper—scissors). Earning resources, players will be able to upgrade their own set of cards in this interstellar, engine-building game.

Kardashev Scale is a fast-paced game where players simultaneously collect resources by adjusting a dial and revealing 1 of the 3 resource symbols. Each symbol trumps another symbol and can potentially earn you resources—resources that can be used later in the game to purchase advancement cards to further your civilization.

Choosing to purchase an advancement card requires the player to secretly select the card icon on the dial prior to comparing, essentially surrendering their chance to earn resources. That player, in turn order, may purchase one of the available advancement cards at the market.

The game features 3 different levels of advancement cards, each with their own unique purchase price. The Kardashev Scale works in a pyramid pattern, so you won’t be able to purchase level 2 cards until you have at least 2 level 1 cards in hand. The same rule applies to level 3 cards as well. Each card features a value and ability that can be used the rest of the game. These abilities may provide you additional resources each turn, end game bonuses, etc.

The game ends when one player reaches 25 points. Players then add up their card values and any bonuses and the player with the most points is the winner.

The Kardashev Scale plays from 2 to 5 players. There is a slight variation for 2 player games, but it typically plays the same at all player counts. While the 2-player variant is fine, the game plays better at larger player counts because of the added gamesmanship. With the simultaneous-play element, games move by at a fairly brisk pace despite the added players.

The game’s components are fairly minimal. There is a deck of cards, 5 dials and a mixture of cardboard tokens representing the resources. Overall, the components are acceptable. The cardboard quality of the dials feels good and sturdy. Card deck quality isn’t anything special, but it’s much better than a lot of games out there.

The artwork in the game is what initially caught my eye. It’s easy to overlook artwork in any card game when you’re caught up in the action, but the artwork here is really well done. Each card features a unique sci-fi image matching the card’s theme. Starting with the cover and continuing to the cards, each piece of art feels rich and I didn’t notice a single one that felt rushed or overlooked.

Kardashev Scale would definitely be considered a lighter weight game. The game plays like a race, resolving quickly without too much heavy thought. There is definitely some strategy when determining what resources to pursue and which cards to purchase, but the decisions shouldn’t cause too much slow down to the game’s pace. Certain cards provide the opportunity to create mini-engines that can boost your resource production and help define your path going forward.

I enjoyed the game’s futuristic intellectual and metaphysical ideas. Ideas like Galactic Telepathy, Infinite Terraforming and Multiverse Contact read like an episode list of Star Trek. While they may not appeal to everyone, I appreciated the creativity that went into crafting  these. Unfortunately, the theme isn’t terribly connected to the mechanics and could have really been anything. Because of this, the fun concept and artwork behind the game feels a little wasted.

The gameplay itself isn’t anything special, but it plays smoothly and is super easy to pick up. Depending on your opponent’s choices, players collect resources quickly and are able to start building your card-pyramid culture within a couple turns. Similar to games like Splendor, players may race for a certain card and players missing out may end up at the mercy of what’s left in the market. I can definitely see the paper-rock-scissors mechanic being divisive. On one side, it’s painfully simple, but on the other, it paves a clear pathway for an almost primal gamesmanship.

I certainly felt some cards were better than others and you’re often left to the luck of the deck. The game is made to be played quickly and easily with the only hang-up for some players being the copy on each card. It’s not terribly complex, but keeping track of 5 or 6 special abilities can be a chore for some. You may miss some bonuses, but the game will be over quickly enough and you’ll be able to redeem yourself next game.

The Kardashev Scale looks great. The artwork really draws you into the game, but what it draws you into is fairly shallow and brief. Serious gamers might find the exercise a little tedious, but it’s more of an entry-level game that works well for less experienced gamers and fans of the theme. Despite its faults, I enjoyed the Kardashev Scale. I love how quickly it played and that I was able to teach and play it with a variety of ages. There are games that do what Kardashev Scale does a little better, but there are also a number of positives to enjoy. I foresee this getting regular playing time if it finds its way into the right hands.