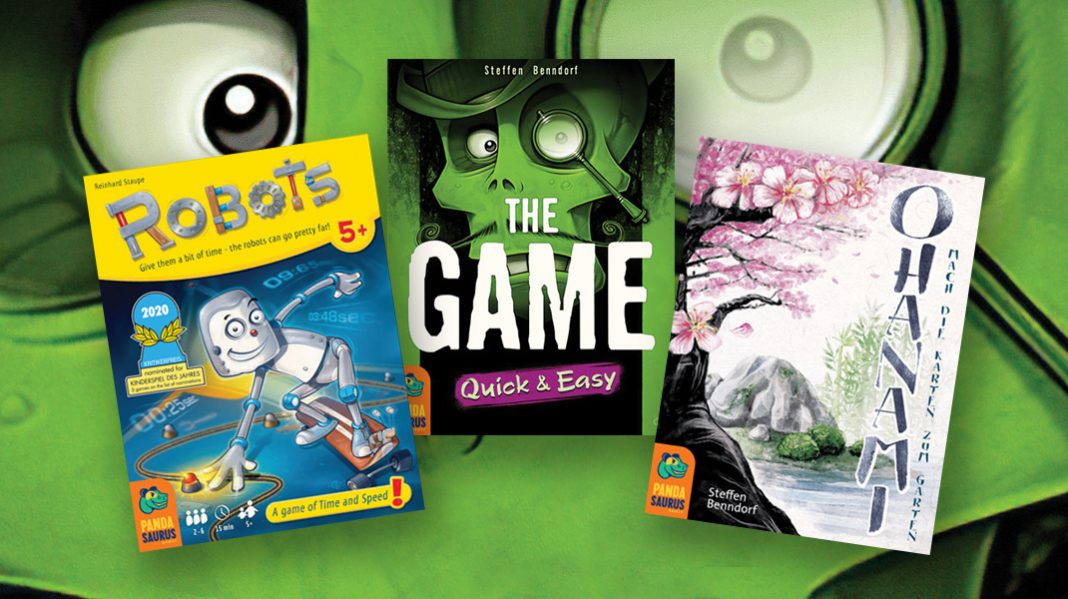 Pandasauraus is known for publishing fun and unique card games that appeal to a large audience. In this post I take a look at 3 of their newest releases: Robots, The Game: Quick and Easy and Ohanami.

Robots is a difficult game to describe. It’s a cooperative game where players take turns as a robot and are given a goal of following a line on a card flanked by a number of random objects. The player is given the goal of reaching a specific object and a “speed” with which they travel the the line. The speed (slow, medium or fast) is made public to the other players and the robot makes a starting BEEP while navigating the line in their mind. Once they arrive at the object they make another BEEP and players attempt to guess the correct object. Players are awarded tokens based on how close their guess was and tokens are counted up at the end of the game to determine how well the group did as a whole.

Robots, to me, feels like The Mind for kids. If you’re not familiar with The Mind (another Pandasaurus game), players take turns mentally forming a rhythm in an effort to play the numbered cards in their hands in ascending order while limiting their communication including not speaking.

In Robots, you’re trying to find that unique rhythm with the robot player. What do they think is slow, medium and fast? While it’s very simple, the game is truly unique, fun and plays quickly. This is the perfect game for young children (of all ages). It’s challenging changes each game depending on the players.

In The Game: Quick and Easy, players cooperatively take turns playing 1 or 2 cards on 2 stacks (1 for ascending numbered cards and the other for descending). The game has a total of 50 cards, 5 different colors each numbered 1-10. The conditions are simple, play all the cards in the deck and win the game… fail to play and you’re out.

The Game does provide a nice wrinkle: You must follow the ascending or descending rule of each specific deck UNLESS you can match the color of the previous card played in that stack. For example, in the case of one of the ascending decks, if the last card played was a green 9 you could follow it up with a green 2. This provides new life for the stack. But be careful how you use your cards because with each one played your future options decrease.

Ohanami is a light, strategic card game that’s easy to pick up and tons of fun to play.

During the game players will draft cards and attempt to play them – building their own gardens. Players can play up to 3 gardens with each garden arranged in numerical order. As players play they can only add cards with a higher or lower value – adding them to the ends of the columns.

The game takes place over 3 rounds. To begin each round players are dealt 10 cards. Players then simultaneously draft 2 cards from their hand and pass the remainder to the next player. Players will immediately attempt to play those 2 drafted cards in their garden columns. This continues until all cards have been drafted. Players then move to the end of round scoring.

Players score by collecting specific cards meeting end-round scoring goals. The 120 card deck features 4 unique suits: blue (water), green (vegetation), gray (stone) and pink (flowering trees). Players may draft any card suit into their garden at any time, but will only score based on that rounds scoring goals. At the end of round 1 player receive 3 points per blue cards total in their gardens. Round 2 gives you 3 points per blue card (even if they were counted in round 1) and 4 points per green card. In the final round, players receive 3 points per blue card, 4 per green, 7 per gray and a set score for how many total pinks gathered (1 for 1, 3 for 2, 6 for 3, etc.).

The winner is the player with the most total points after round 3.

Ohanami is an unassuming game that plays fast and is truly a blast. The simple mechanics allow anyone to jump in almost immediately, but there is a ton of strategy to go around. The end round scoring really challenges your choices. The gray and pink provide big end-round scoring late in the game, grabbing too many too soon can leave lots of points on the board early.

While drafting cards you’ll find yourself playing your opponents as much as yourself sometimes passing on the best cards in effort to keep your opponent from bigger paydays. Even choosing when to start a new garden can be a pressing decision (players are able to start a new garden when they choose). Starting a new garden too early can potentially leave you with huge number gaps in your column – even keeping you from playing drafted cards later in the game, forcing you to forfeit this points.

While each of these games featured in this article have their own merits – Ohanami rises above. A great mix of accessibility, strategy and fun. It’s definitely a game I’ll be playing again and again.