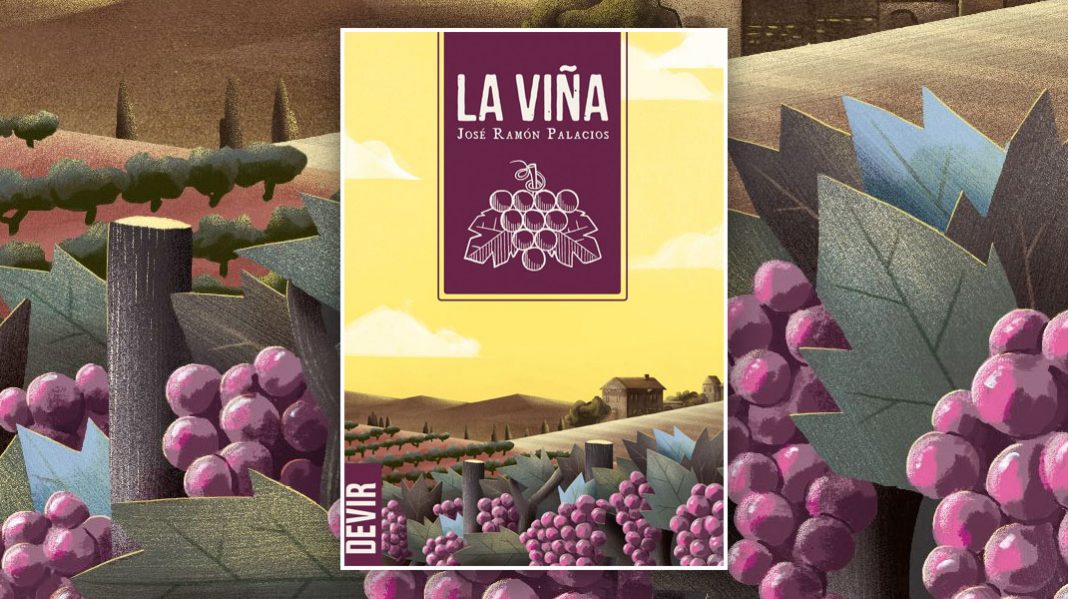 You’re an heir to a recently deceased viticulturist. In his will, he’s asked that his vineyard be brought back to its former glory. Compete against other potential heirs by pruning overgrown vines, picking choice grapes and selling them earning you prestige. Earn the most prestige and take ownership of the vineyard.

In La Viña, players take turns moving their player down the aisles between the grape vines collecting the best grape cards into their baskets. Once they’ve reached the end of the aisle, players then have the opportunity to sell their collection of grapes to various specialized wineries. Earn the most prestige points by fulfilling the biggest orders while helping the wineries meet their quota.

The game is played on a rondel board where each space on the vineyard path may only be occupied by one picker at a time. Players advance down the path at their leisure with the player furthest back always getting the next move.

Each aisle on the path is stocked with 2 stacks of 2 grape cards each. When landing on one of the path’s locations, players will have the opportunity to choose a grape card. Players only have access to one of the top grape card at each location. The game features 4 unique grape types ripe for the picking including Pinot Noir, Garnacha, Chardonnay and Cabernet Sauvignon.

Grape cards each feature a number signifying their value to the wineries. It’s these number values that must add up to meet the wineries requirements.

Once picked, the player places the grapes in one of their 2 grape baskets. Initially, each basket holds two and three grape cards respectively with the opportunity to upgrade to larger baskets later in the game.

The goal is to fulfill order requirements from local wineries. At the beginning of each game, a random number of winery cards are chosen based on the player count. Each winery has unique requirements and it’s up to the player to build a plan of attack to meet those requirements. Some wineries will require a certain value of one type of grape while others might allow for some combination. With multiple, unique winery cards, goals and strategies will change from game to game. Of course, the availability of the grapes is always detrimental to your success.

Tools are available to aid the picker on their quest for grapes. Certain grape cards will provide bonuses that allow the picker access to these coveted tools to select covered grape cards, grapes from a previous point on the board path, multiple grapes on an aisle or a combination by using multiple tools. Depending on the player count, tools can be rare and hugely beneficial.

While causally moving forward on the board might lead to more grapes, the player quickest to the end of the path earns the first pick at the wineries along with receiving the advantage of playing first next round.

When a winery requirement is met, that player places one of their wine barrel tokens on the winery card. Each winery card has only a limited number of orders that can be filled. That player then receives those prestige points. When a player has finished placing all of their winery barrels the game ends and players count their prestige points with the highest total winning the game.

La Viña is a small box game exploding with components: barrel tokens, tool tokens, 3 unique prestige tokens, meeples and a slew of cards. While sometimes on the smaller side, everything is high quality and feels really good to the touch. The artwork is really nice and works perfectly with the theme. Everything is very stylishly presented. La Viña brings a quality production with a huge value for such a small box.

La Viña is an interesting game. I’ve seen boxes of similar size feature maybe a deck of cards and a few tokens. La Viña is almost bursting at the seams with components, artwork and personality. This is really a big box game, shrunken down to fit on nearly anyone’s shelf.

The game is very simple and straightforward. Pick a grape, sell a grape, earn prestige, rinse and repeat. While the play is simple, the strategy is thoroughly engaging and just plain fun. The board employs a rondel mechanism where each move can have serious ramifications to your winery fulfillment goals. With any rondel system, playing defensive, limiting your opponents access to certain locations can be just as effective as landing your next big grape card. That certainly is the case in this game – especially as the game progresses and winery orders become more and more limited.

While this might seem cutthroat, the theme of the game really seems to bring balance to the table. The artwork gives the game an almost peaceful feeling. This is a game where you can get down and dirty strategically or you can sit back and enjoy the ride. One player might work to gain tools, another might race to the end of the path to have first crack at the wineries as well as first choice next round and a third may be completely content slowly working their way across the board. While there are disadvantages to each of these strategies, each approach could legitimately lead to victory giving the game some nice strategic diversity.

I got a thrill trying to execute a balanced offense and defensive attack. It was great being able to grab that high valued grape card you knew your opponent was eye balling while simultaneously blocking their next move in one fail swoop.

Planning your attack and the anticipation of collecting your group of grapes makes the game strategic, but not over the top. A crowded vineyard isle can still brew some positive anxiety and really force you to dig a little deeper to outwit your opponent.

Playing 2 players gave the game a similar feel to playing with 3 or 4. By giving players 2 pickers instead of 1, a 2-player game can simulate a little more congestion and strategy that might be missing if they were only given 1 picker which would leave the board a little loose and remove much of the games positive tension.

• The theme and artwork are fun, relaxing and engaging

• There is a lot of value in this small game

• The gameplay is relatively simple and approachable

• Works really well at both 2 players and higher counts

• Some of the components are a little on the small size and were hard to pick up.

If Viticulture and Parks had a baby it would be La Viña. I love how much punch this small box game packs. While this isn’t Viticulture in terms of strategy nor is it Parks in terms of artwork, it does scratch an itch that both of these games present. La Viña is easy to get to the table and quick to play. The theme and strategy are both fun and engaging. It’s so accessible that it just might be one of those rare games that, unbeknownst to them, could rope a non-gamer into the world of strategy games. This was a pleasant surprise that I’ll be happy to play in the future.