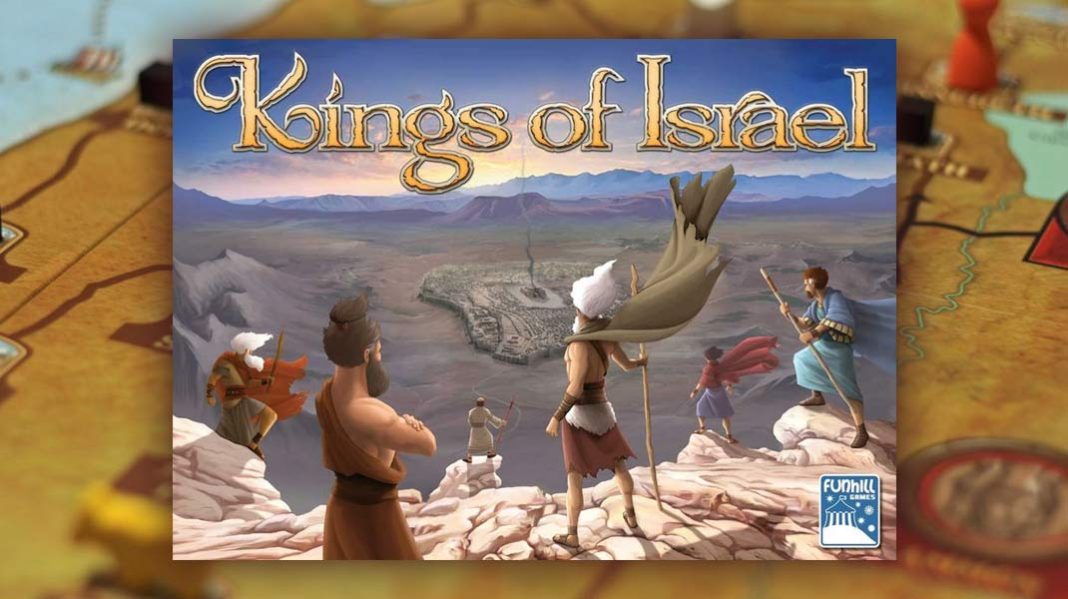 Kings of Israel takes place over 300 years of history during the reign of 23 Jewish kings. In this cooperative game you take on the role of a prophet working diligently to preach the word of God as sin spreads throughout the country. Your goal is to steer the Israelites away from sin, removing idols and building alters for sacrifice before the capture and destruction of Israel in approximately 724 B.C. Build a set number altars to God before times runs out and victory is yours.

To begin the game, players are assigned a prophet role with random unique ability. Players will take turns using a series of actions to traverse the land of Israel and carry out their mission. Each turn is designated by the ruling years of specific historical kings of Israel. During the reign of good kings when the land of Israel was prosperous, players will receive a blessing card that benefits them. During the reign of evil kings, player will be forced to deal with a sin & punishment card.

Every turn, depending on the number of players, a certain number of location cards will be revealed spreading sin cubes through the land. As these sin cubes increase over specific location, idols will be built and the sin will unlimitedly spread to neighboring cities. It is the responsibility of the prophets to keep this sin contained.

Each player gets 4 actions per turn where they may do one of the following: Move to a neighboring city along the road, preach to remove sin cubes, destroy an idol, acquire a resource, make a sacrifice or give a resource to fellow prophet. Building an alter requires a set of gold, stone and wood resource cards. Drawing a random resource card is a necessary gamble in your pursuit of building the alters determined by your player count necessary for victory. Neglecting sin or your pursuit of acquiring resources will ultimately lead to your downfall. Other action such as making a sacrifice allows you to eliminate multiple sin cubes from your location along with cubes in neighboring cities as long as you’re in a city with an alter and you hold the necessary resources.

Play continues until you’ve achieved your goal of building alters, exhausted the number of turns through the line of kings or run out of sin cubes or idols to spread.

The game features a number of ways to adjust the difficulty level including adding a false prophet who causes trouble each turn as well as playing in a series of campaign mode driven story lines progressively challenging you more each game.

It’s tough not to compare Kings of Israel to the classic, globetrotting, virus-battling game, Pandemic. Kings of Israel institutes a number of similar game mechanics and with similar resolutions. I’m a big fan of Pandemic in the way it manages to create tension and anxiety in a cooperative setting. That being said I found Kings to be different enough to engage a Pandemic fan with plenty of wrinkles thrown in to give it its own unique voice.

Thought it not entirely necessary for the enjoyment of the game, Kings of Israel is clearly directed at a Christian audience… and they won’t be disappointed. Everything from the historical timeline to creatively integrating Bible verses into the blessing and sin and punishment cards amounts to a rich, immersive theme. The map allows you to learn and engage with the historical locations read about in the old testament.

Just like any cooperative game, planning and strategy need to be devised in order to win the game. Plan your attack and you stand a better chance. Some of the special abilities received at the beginning of the game are better than others, and just like in Pandemic, the right combination can really benefit your team.

Certain sin and punishment cards can cause devastating results to your game plan. The same can be said for failing to draw the right combination of resource cards to build and alter. All that to say there is some luck involved that can strongly alter your approach and potentially deny you victory.

The 2 player count is a real challenge and I have failed to achieve a single victory after half a dozen tries. The 4 player count was a little more forgiving, but still retained a decent amount of tension. I also played multiple hands in a single player game – so even thought the game doesn’t have an official solo variety, you can play the game solo if that’s your bag.

The artwork and components are pretty standard. The illustrations aren’t amazing, but they aren’t terrible. The card, board and token quality works fine for this type of game.

All-in-all I really enjoyed the theme of this game and they way the designer implemented Biblical history into the actions of the game. Being a big Pandemic player, I thought the game play was great and I’m happy to bring this to the table in the future. The 2 player game definitely proved to be a challenge and one I’d like to ultimately conquer. I could see this being a big hit at family game nights as well as with youth and church groups.