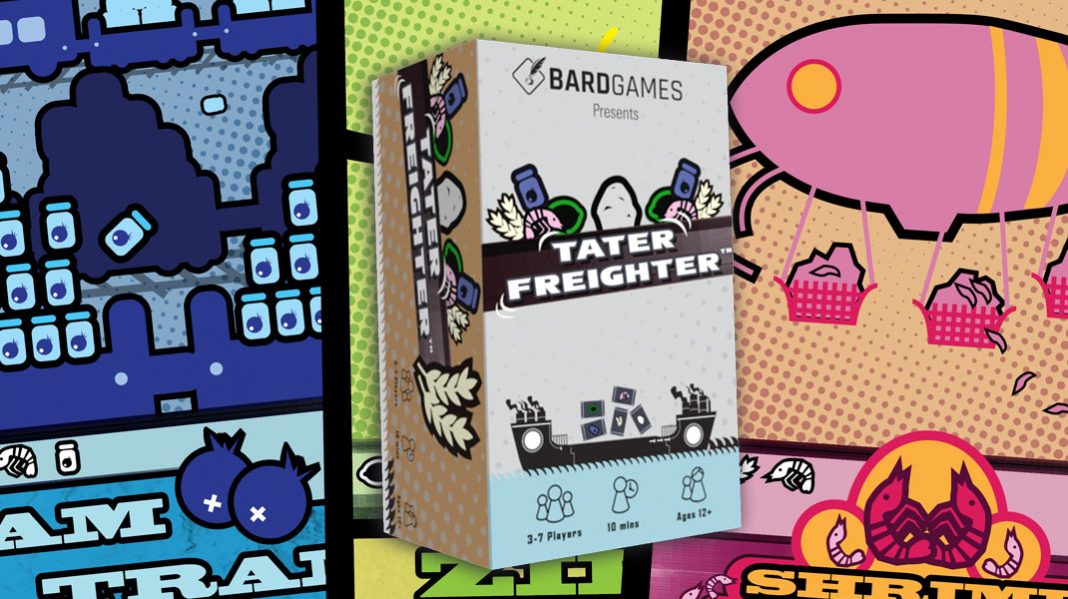 Tater Freighter is the new, simultaneous play, family-friendly card game from Bard Games. Match whits with your opponents as you attempt to unload the most edible cargo from the docking freighter. The player with the most food at the end of 6 rounds is the winner.

In Tate Freighter each player is given an identical set of 6 cards each matching a specific food cart on a docking freighter. Each freighter card is laid out one after another in a predetermined order. Finally you shuffle the food card deck and place it on the table and the setup is complete.

The game takes place over 6 rounds. In each round 8 food cards are drawn from the deck and placed under their specific freighter card. Each food card matches one of the eclectic food cart themes (limes, wheat, shrimp, jam and taters… obviously just the essentials).

Players then simultaneously choose one of their food cards and reveal at the same time. The food is then collected or divided by each player based on the card they revealed. Food cards are resolved starting from the left freighter card to the right. If two players share a cart they divide the food cards evenly leaving behind any remainder. Players collect the food cards available in that cart AND any remaining food card to the left.

You then discard your personal food card and the next round begins.

Along with their personal food cards, each player has an additional card labeled “Tater Later.” This card allows you to put a previously discarded food card back in your hand to use again or to save for additional bonuses at the end of the game.

Each food card collected is worth 1 point while any food card matching a personal food card remaining in your hand at the end of the game is worth 2 point. There is 1 additional bonus “snow cone” card in the food deck that can be collected worth 3 points.

This may seem simple, but one thing in common with my favorite family games is that everyone has a chance to win. Tater Freighter provides that opportunity. I want my 6-year-old to feel she has a chance to win from the get go. Does that mean the game neglects the more strategic thinkers? I wouldn’t say that’s the case either.

Tater Freighter is really a battle of wits. Can you out-think and out-maneuver your opponent? With only a limited number of play options each round the consequences of choosing the same crate as your opponent can really set you back. In a game like this you’re really playing your opponent instead of the game. Playing the game with my wife and 2 girls reminded me of that scene in the Princess Bride when Westley battles Vizzini… only I was Vizzini juking and doing mental gymnastics around my opponents – laughing at their next inevitable misstep that will lead them straight to defeat. Of corse, if you’ve seen the movie you know Vizzini gets it in the end – which is exactly what happened to me. My wife and I always making the “wise” play caused us to split points leaving the door wide open for my girls dance to victory. INCONCEIVABLE!

Any family game that my daughters can legitimately win is a keeper in my book. For us, this fell in line with some of our other favorite family-weight games such as Sushi Go and Point Salad.

The most difficult thing I found about Tater Freighter was explaining it to first time players. The concept of collecting all the cards to the left of your chosen freighter cart always seemed confusing at first. Once the first round was played everyone was on the same page.

Negatives? I’m not in love with the games graphic design. I know BARD Games was likely going for something quirky, but it’s just ok for me. Unlike many games thought the graphic design here doesn’t derail the fun-factor and shouldn’t be seen as a deterrent.

If you’re looking for something deep and challenging, you probably need to look elsewhere. But for me and my crew, we really enjoyed Tate Freighter. With its easy rules, quick setup and unique mechanism, it is definitely one my family can enjoy together.