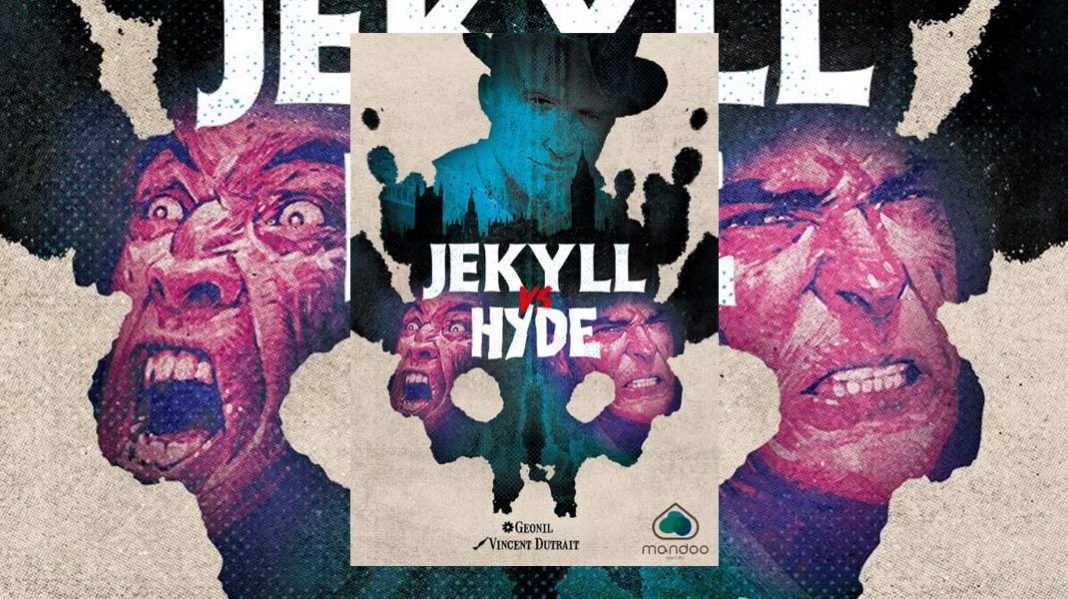 The literary struggle between Robert Louis Stevenson’s Dr. Jekyll and Mr. Hyde steps into the board gaming world in this 2-player trick taking game of balance and sanity. One player will don the moniker of Dr. Jekyll seeking to slave off his sinister alter ego by finding harmony in life. The other, seeking to drive Dr. Jekyll into madness where Mr. Hyde will eventually take over.

Many 2-player games can best be described as a push and pull where players participate in a tug-of-war style game with one ultimately getting the best of the other… Jekyll vs Hyde is pretty much just a tug moving in one direction toward chaos.

The game takes place on a one-way track (the identity track) representing Dr. Jekyll’s descent into madness. The game plays over 3 quick rounds and if, in the end, Dr. Jekyll maintains even an ounce of sanity he is victorious. If the track marker reaches the end, Hyde takes over control and is declared the winner.

Players take turns playing cards and winning tricks. The deck is made up of 3 suits, each numbered 1 to 7 and a handful of potion cards. As in typical trick-taking fashion, once a card is played it must be followed by the same suit. Afterwards, the player with the highest valued card wins the trick.

Jekyll vs Hyde introduces a “trump” system that’s defined by the order suits are revealed. The first colored suit instantly becomes the strongest suit in the game with the other two following in order. These suits are represented by “evil tokens”, each with a special effect (trade 2 cards between players, steal a suit or refresh the suit tokens). These are triggered when playing a potion card. The potion card suit becomes whatever suit is played with it in the trick. Whether won or lost, the player who played the potion card earns that suit’s bonus.

The real spin comes into play when resolving the progress of the identity track. After each round, players add up their total tricks and the difference between the two determines how many places the token moves toward insanity.

Jekyll vs Hyde is a small box game with a limited set of components. The artwork from Vincent Dutrait on the cards and board is as brilliant as ever. Everything is solidly produced, but the real star of the show is the identity marker—a heavy, metal double sided bust of Jekyll and Hyde. While it’s only moved 3 times during the game, it feels good sitting on the table and brings a high-end aroma to the experience.

➕ The game plays fast… fast enough to get in at least 2 games where you can play as both Jekyll and Hyde at least once.

➕ Each alter ego presents its own unique puzzle to solve.

➕ While both roles play their own unique game, neither seems to have an advantage over the other providing a fun, balanced, strategic experience, making way for a true battle of wits.

➕ The theme plays nicely in a smart and simple way.

➕ The artwork gives the game a cool, dark vibe that draws you into the battle over Dr. Jekyll’s mind.

➖ Due to its simple play, I can see this eventually losing its appeal. That being said, I’m a half dozen games in and I’m just now getting excited about my strategies.

Players looking for a unique, think-y 2-player game, full of interesting decisions that plays quickly are going to enjoy this the most. While it’s not 100% necessary, fans of the dark, literary theme are going to get added enjoyment.

The best thing about the game is the unique approach you take with each character. Playing with Jekyll requires a completely different mindset than playing with Hyde. So far, despite their differences, I can’t see one with an advantage over the other.

Jekyll and Hyde bring together a great combination of interesting decisions, fast and fun turns and beautiful artwork blended together under the umbrella of a simple, yet smartly integrated theme.

There are so many aspects of this game that really blew me away starting with the unique approach you take when playing with each character. Dr. Jekyll requires balance which means he wants both players to win an equal number of tricks. Hyde, on the other hand, represents chaos… he doesn’t care who wins as long as they win big. While Jekyll can’t necessarily hide his strategy, I often found myself shifting gears midway through a round to counter Hydes’ approach. Hyde felt similar, but I worked harder to conceal my strategy, hoping to surprise Jekyll by whether I hope to win or lose the most tricks. This seems very simple as I type this, but the game is truly a battle of wits. There really is a sense of joy playing this as the rounds unfold and favor swings back and forth.

The evil tokens bring an extra layer of strategy to the game. Their connection with the potion cards make for some interesting decisions on when and where you play them. Of course it benefits to know what the other player is holding—unfortunately, 5 of the game’s 25 cards aren’t in play each round. Being able to manipulate the evil tokens and take advantage of them during a round can give you a nice added advantage.

I also really enjoyed the one-way identity track. It’s kinda cool that one player is pulling frantically while the other is just trying to slow them down. It’s a unique concept and it works beautifully with the source material.

Jekyll and Hyde is definitely going to stick around in my collection. The unique game play, fun theme and interesting decisions make this one a blast to play. It plays incredibly fast and almost guarantees you’ll want to play a second game. And… if you decide to play a second game, you can switch sides and discover a completely different experience. As far as small box, 2-player games go… this is one of the best I’ve played in quite awhile.