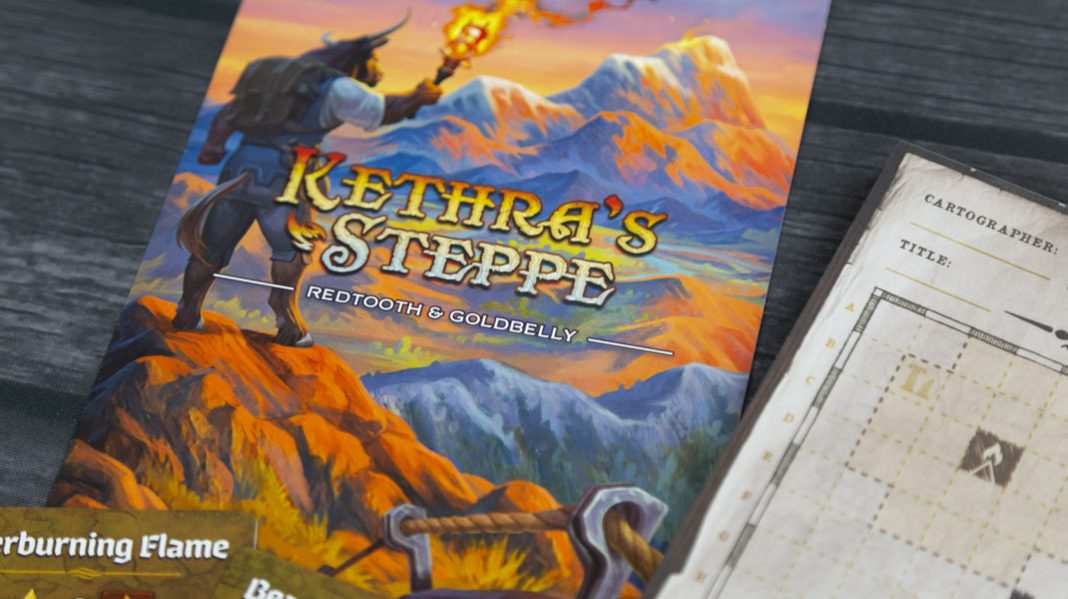 Travel to distant lands, traverse the mighty tundra and haggle with merchants in this new set of expansion maps for Cartographers or Cartographers Heroes. Each map introduces new challenges, new scoring opportunities and new ambushes for fans looking to extend their cartographer adventures.

Cartographers is generally recognized as one of the top flip and writes on the market and likely the best fantasy-themed flip and write available. I had heard solid rumblings online and purchased Cartographers on a whim at my local gaming shop. I was super pleased to see it live up to the hype. I instantly fell in love with the decision making and accessibility. This is something the entire family can get into. It looks great, provides just enough variety and drawing the terrain on your map is just plain fun.

These new map expansions aren’t re-inventing the wheel and I’m already a big fan of the game… so it’s no secret that I approve. But, let’s dive in deeper and see what each new map offers, if it’s enough to get you excited and help you determine if you need these as part of your Cartographers ensemble.

In these double-sided maps, players are traveling to the frozen expansion—home to the Frost Giants—to pick up the pieces where a past cartographer left off.

These new maps feature faded terrain spaces that must be filled in with that specific terrain type. There are also frozen lakes that when surrounded, claim coins.

The biggest addition are 2 new ambush cards: The Dire Wolf Prowl and Frost Giant Advance. The Dire Wolf actually destroys an empty scouted space removing it from scoring and you know how limited space is as it is. A carefully placed wolf and dead space can truly multiple the damage caused to an opponent. The Frost Giant, on the other hand, must be surrounded or destroyed to avoid seasonal losses.

This map is all about forcing you to work within your limitations. The faded terrain spaces can be both a problem or a benefit… but they’ll take careful planning. The frozen lakes can provide a nice bump in coin, but it’s the ambush cards that produce the most unexpected twists. That’s not to say this isn’t always the case in Cartographers, but destroying empty space from the Dire Wolf can be a real pain.

Final Thoughts: This expansion is fun, but doesn’t provide much new content. The puzzle changes with the faded terrain and the new ambush cards create different problems to solve, but probably my least favorite favorite of the 3 new map expansions. This is going to be best for die-hard Cartographer fans.

Another double-sided map pack, this adventure has you lighting beacons on the Redtooth and Goldbelly mountain ranges.

The beacon areas play out like their own mini-game within the game. Beacon scoring cards are added to the standard set of scoring cards and change up how the lighted area around a beacon is scored. In addition to surrounding and lighting a beacon, players will score points in different ways based on the card’s conditions.

While a fairly simple addition, I really enjoyed the beacon challenge and additional scoring options. All 3 beacon cards essentially have you do the same thing, but they score differently putting different emphasis on how you approach the beacon scoring versus the standard scoring. For me this added a fun new dimension.

Final Thoughts: While still probably not critical for every Cartographer player, seasoned players are going to enjoy this new take on the game and the strategic challenges it presents.

Thunderworks was definitely saving the best new map for last.

In Hornhelm, players have access to a market where they can purchase items. These items allow players to earn journal bonuses based on taking certain actions on your map. Journal points are added to a Journal Track where big points can be earned from reaching certain tiers. A new merchant card is active each season limiting the items available forcing you to often take different scoring paths.

Final Thoughts: This map provides a dramatically different strategic approach. I really enjoyed the new choices and think it provides the longest legs of the 3 new maps.

I really enjoyed these new expansions. Expansions are typically never a necessity, but dedicated Cartographer players are going to enjoy the new wrinkles.. I still really like the unique game play options and the variety they bring, but I think at the end of the day, they don’t quite change up the base game enough for me to label these a “must buy”.

For me, I don’t see anything supplanting Cartographers in this space, and will definitely be cycling these maps through my regular games of Cartographers going forward!