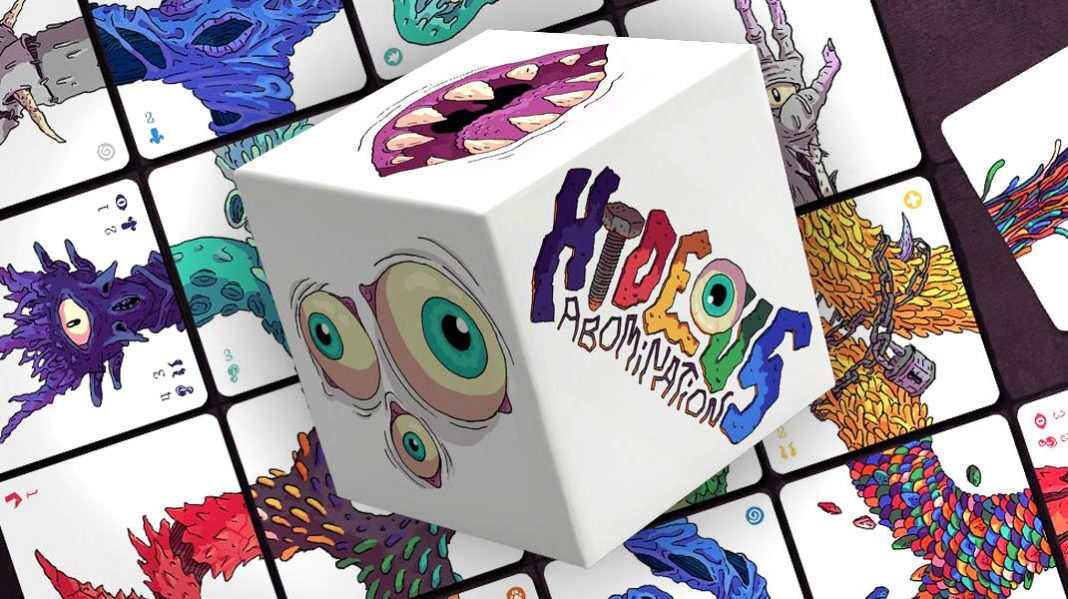 Calling all Evil Geniuses, Macabre-Minded Surgeons and Doctors of all things DREADFUL! A competition has formed to determine who can assemble the most bizarre, outrageous and shocking creature. From an agglomeration of spare monster parts, you’ll use your personal style and creativity to impress the judges and create the greatest HIDEOUS ABOMINATION.

Players will take turns rolling a die and performing a series of actions that all ultimately lead to drawing cards from an insane assortment of random creature features. We’ve got claws, tails, wings, heads and much more in every physical appearance you can imagine. Carefully considering a variety of judging categories that change from game to game, players will piece-by-piece, assemble their creation. Earn the judges favor by gathering the most eyeball, horns or tails. Use your turn to throw your opponent off by playing on their creature or steal an opponent’s piece that harmonizes with your own monster’s attitude (or just to be mean). When the first player completes their creature, scoring categories are tallied, points are passed out and a winner is crowned.

Hideous Abomination is a labor of love from the bizarre mind of creator, illustrator and publisher, Judson Cowan.

At the heart of the game, players will be drawing monster parts and playing them on their own creature with the goal of earning sets and achieving endgame scoring goals. The game comes with 4 standard endgame grand prizes and then allows players to randomly choose 4 more awards to keep things interesting.

Learning the game is relatively simple. Players take turns rolling a die that features a variety of actions. Depending on the roll, players may draw from the community buffet of 3 face up cards/parts, refresh that same buffet, stealing a piece from another player’s creature or bolt a piece of their monster in place (keeping thieves from stealing it).

Players begin their monster with 1 of 9, unique, double-sided torsos. From there, players will draw from a deck of 190 completely different parts. There is no limit to how you assemble your monster either. If you want to get crazy and give your creation 8 heads… go for it! If you want a handsy creature… go for as many hands as you can get your paws on.

This might seem like a free-for-all, but your ultimate goal will be to achieve the sets prescribed in the endgame goals/awards. The grand prizes consist of the first to finish their creature, the most colors (each body part is designated 1 of 9 different colors), the most digits (fingers) and the smallest monster. The sub-awards might require the greatest quantity  teeth or ears. The interesting thing is a head may contain 1 eye and no ears, but a tail might be equipped with multiple horns, a few eyeballs and a couple noses. In addition to the awards, players will also score points for the most parts featuring the same color. The game also adds optional secret objectives to beef things up.

The gameplay is really simple. You’re drawing cards and placing parts. Kids of any age can enjoy this. The real draw is also in the game’s charm: There are SO MANY strange, funny, bizarre and unique body parts to keep you engaged… and each one has a different number of body pieces that could potentially garner you an endgame trophy.

While it’s easy to get lost in the fun of building your own creation (it definitely appeals to your inner child), there is also an enjoyable, strategic approach to the game. You’ll have the opportunity to play defensively by stealing another player’s coveted creature part or even playing on an opponent’s creature. This can have varying effects from causing temporary frustrations to completely ending the game prematurely for that player.

While the game can end at any time, it isn’t a race. It really comes down to how efficiently you compose your monster. Ending the game sooner may be beneficial at some point, but being the first to complete your creation doesn’t always guarantee endgame success.

HOW IT MADE ME FEEL

On the surface, Hideous Abomination looks like a standard set collecting game with a cute, creature theme. What surprised me the most was the depth it provides. Again, it starts from the massive stack of unique creature cards/parts. There are so many directions you can take your creature. But the addition of the die, the variety in the end game objectives and the secret objectives add a lot more depth. While building your creature is creatively satisfying, outwitting your opponents in an effort to gain the most ears or feet gives you a horrifying sense of accomplishment.

Playing Hideous Abomination at different player counts provides a bit of a different game, but not so different you can’t enjoy it in a way that works with your group. Playing 2-player was more of a solitaire approach, with more focus on what you’re personally building. Playing at 3,4 and 5 each added more interaction between everyone. Mostly this was positive, but there are some actions (like stealing from an opponent) that can rub people the wrong way. More players does increase the game time, but overall, it plays fairly quickly. For me, the sweet spot was at either 3 or 4.

This is mainly a card game, and the cards of various sizes (body parts, awards & objectives) and unfortunately, aren’t the greatest quality. While they ended up being acceptable, I would have really appreciated thicker card stock. This is a game that kids can enjoy and I worry that younger players may take their toll on the components. Outside of the cards, the bolt pieces are solid and the die is pretty standard. The card quality, while disappointing, would not get in the way of me recommending the game.

The artwork is the heartbeat of this game! It’s silly and off-the-wall and sets the tone for the entire play. The sheer amount of effort to create this many, engaging, unique creature pieces is truly an accomplishment. It is cartoony, but anything else wouldn’t have done the theme justice. I’m a big fan!

During my review period, I was able to play this a half-dozen times at 2, 3, 4 & 5 players counts. I’m pleased to say I’m not even close to getting tired of this. You’re always discovering new creature parts you haven’t seen before or building hilariously new combinations. I also noticed as we played over and over again, the competition really increased. We all began to better understand playing both offensively and defensively and that only endeared the game to us. We may not play this forever, but there are so many things that work both for adults and kids that give the game lots of appeal and flexibility. I could easily see us playing this regularly.

Hideous Abomination also has a fun, little expansion that provides a couple new elements. In the expansion, players can draw “decay” cards that can be played on opponents creatures rendering that card’s value useless. There are also robot pieces that might not provide all the bonuses of other cards, but can never be stolen by an opponent. There are a few additional odds and ends as well. It doesn’t completely change the game, but it does extend the replayability by adding some fun little twists to keep thing interesting.

Hideous Abomination is a lot of fun. It’s able to take what is often a drab mechanic (set collection) and infuse fun and life to create something engaging for kids of any age. The artwork is charming, bizarre and laugh-out-loud and makes building your own abomination a blast. The depth of the game is a surprise. It’s not so heavy you can’t easily teach new players, but it does make for some interesting decisions and ultimately boosts the experience. If you’re in the market for a not-so-serious set collecting game that provides a little depth, and appeals to a wide range of players both young and old… you should definitely support Judson Cowan and his delightful creation, Hideous Abomination.