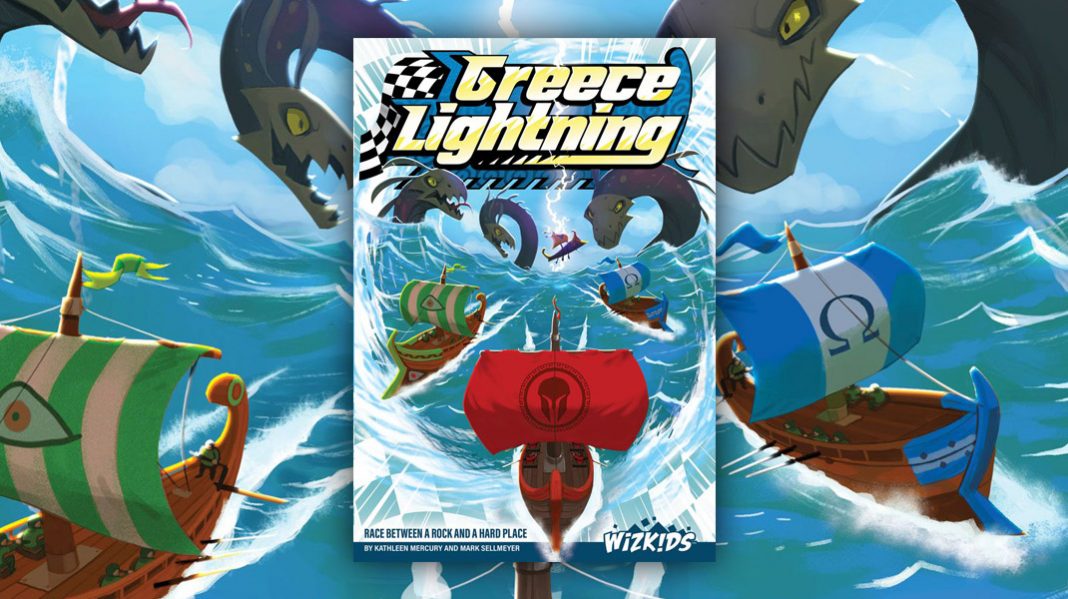 It’s a cool, breezy morning off the coast of Greece. You are the captain of one of the fasted trireme’s the ocean has ever seen and today is the day of the Hydra Regatta… a rowing competition where only the best compete. Navigate through a rough, ever-changing course full of treacherous obstacles… and perhaps, if fate is on your side and a little favor from the gods, you may end up victorious.

Greece Lightning is a racing game where players roll dice and move their ship around a modular player board. Dodge whirlpools, gather fish, earn the Favor of the Gods and manipulate the board for your advantage (or your opponents demise) in an effort to finish fast and finish first. You’ll find plenty of opportunities to gain advantages over your opponents, but push your luck too hard and you could bust.

You’ve raced adventures, cars and camels, but have you ever raced a trireme? In Ancient Greece, these ships could sit 170 oarsman and they were fitted with a bronze battering ram used for fierce naval battles. Today, you’re going to harness the power of the trireme in pursuit of a different kind of victory… victory on the race course.

In Greece Lightning, players will race their trireme is a circular track made up of multiple wedges. By rolling dice and playing bonuses, you will be tasked with optimizing your path as you work to navigate around pitfalls and slow downs.

The primary tool used in the game are 3 individual dice, each player is given at the start of the game: a navigation die and 2 movement dice. The sum of these dice will ultimately determine the potential points your ship can travel during a turn… but it isn’t that cut and dry. Players begin by simultaneously rolling the frosted navigation die made up of 1, 2 and 3 numbered sides. This initial die really just gets your ship “going”. Players then roll the first movement die. From there, you’re faced with a decision: to roll the next movement die or not. Players now have the opportunity to push their luck. They may roll the final movement die, but unless it exceeds the total of the previous die, they lose both dice. Obviously, the risk here depends on the previous value and the circumstances of the game.

There are plenty of opportunities to mitigate those die rolls through the game though. You’ll receive opportunities to re-roll die in the form of fish you gather and certain places on the board give you a 3-move boost. Once you’ve settled on your dice, you’re then tasked with planning out your turn on the board.

Easily the coolest part of the game is the modular racing board. Providing multiple paths to travel, each piece is uniquely equipped with bonuses and pitfalls that may help or hinder your progress. Along with the bonuses such as gathering fish and bonus movement spots, players will have the opportunity to draw Favor of the God’s cards. These cards provide a variety of bonuses that can be taken immediately or held for the right moment. Theses bonuses may be good or bad and you can occasionally pawn them off on your opponents. It gives the game a little interaction, but it does help with the overall strategy.

The board points to watch out for are the dreaded Hydra. When facing a hydra, you must be prepared toss them a fish or your turn stop right there irregardless of any additional movement.

Where things really get interesting is the ability to modify the board mid game. During the race players may cross a spot that allows them to draw a board game wedge. These wedges are then placed on the board at the end of their turn. Each wedge is random and may be best served playing in an offense or defensive position on the board. Players may place these wedges over any previous wedge piece that doesn’t have host a player. You also have to take into account the individual paths on each piece to figure out if it’s going to provide a future bonuses for yourself or better serve as pitfall played near an opponent.

The game lasts only 3 laps and well played turn can move you a good chuck of one lap. A poor roll and unfed hydras can really frustrate a turn. The potential for a quick game is there, but you’ll definitely need a decent amount of luck and effective management of your fish and Favor of the Gods cards.

Greece Lightning plays 2-4 players. While I think it’s better at higher player counts, there are pros and cons. I enjoyed the interaction at higher player counts. The board changes a lot more and there was a decent amount of interaction from the Favor of the Gods cards. The game box says 45-60 minutes. That’s pretty accurate for a 4 player game, but we were able to play with 2 players in 20-30 minutes. So while I love the extra interaction, I feel this Greece Lightning should be a quick game and that’s only truly realized at 2.

LOVE FOR THE COMPONENTS

The components as a whole are pretty solid, but the piece that stands out he most is the modular, central game board. Overlapping and interchanging the pieces not only looks cool, but adds a ton of fun to the gameplay. The bottom row pieces together fairly well, but I did have a little trouble with pieces sliding around as they got stacked.

The individual player boards aren’t huge, but they are plenty big to hold the rolled dice, cards, fish tokens and provide a fairly comprehensive player’s guide.

The Fate of the Gods cards are smaller, but they look cool and get the job done.

The navigation dice have a cool, frosted look with greek-looking numbers instead of pips. The mini, wooden ships that serve as the player markers are pretty standard, but they add a nice thematic touch.

The rulebook is smaller and was easy to understand.

I don’t always give props to a game’s insert, but Greece Lighting comes with a pretty nice one. Everything sits perfectly in its place and it all goes back in fairly intuitively. Putting the game back in the box is a pleasure all it’s own.

The navigation/push-your-luck dice have a cool, frosted look with greek-looking numbers instead of pips. The mini, wooden ships that serve as the player markers are pretty standard, but they add a nice touch.

I don’t always give props to a game’s insert, but Greece Lighting comes with a pretty nice one. Everything sits perfectly in its place and it all goes back in fairly intuitively. Putting the game back in the box is a pleasure all it’s own.

The game’s artwork is a little cartoony and decently done and fits in with the theme. The color pallet chosen for the game fits the theme perfectly and there are some nice greek-style design elements that helped elevate my overall enjoyment. The iconography is fairly clear and is easy to pick up. I thought the graphic artist did a good job communicating all the game’s necessary information on the individual player boards. There is a key for the iconography and a clear understanding of each round’s actions printed on each board. While this is a fairly simple game to grasp, the clear communication on the game’s components really decreases the overall learning curve.

Greece Lighting has fair amount of re-playability. It’s fast and fun, so it will likely seem more table time than a heavy game with extensive setup. While there is some added strategic depth with the Fate of the God’s cards and the interchanging board pieces, I can see the game getting “same-y” over time. Ultimately, I think re-playability comes down to what else you have in your game cabinet. There is enough fun and accessibility to keep this one coming back, but at some point you may want to graduate to a more complex racing experience.

There are number of things are really fun about Greece Lightning. Moving the board around and frustrating your opponent right before their turn is a lot of fun… I mean, responsibly using the board wedges to determine the best approach while carefully considering everyone else feelings (obviously). I also enjoyed being able to teach and play this one with a wide age group. My younger daughters can just as easily jump into a game as anyone else. It’s not too complicated and it was defiantly good for some laughs and few jabs with our group. Overall, we had a good time playing Greece Lightning.

Greece Lightning offers a solid production value, fun theme and enjoyable gameplay. The game is quick to setup and easy to teach/learn. While there are limited, strategic decisions, the game is definitely on the lighter side and shouldn’t appeal to heavy gamers. There are some unique features… like the evolving race board, but nothing too revolutionary as a whole. The push-your-luck mechanic is a classic one, but also one that can be divisive. There are opportunities to mitigate your die rolls, but if you’re not a fan of luck-based games, you may be turned off to this one. Ultimately this is going to be best enjoyed by players new to the hobby or someone looking for a light-hearted, family-style game with just enough twists and turns to keep everyone engaged. It may not be one you play multiple times when dragging it out, but overall, we enjoyed it and for the right audience, this could be a hit.

Review: DIE in the Dungeon

Review: Doctor Who: Time of the Daleks