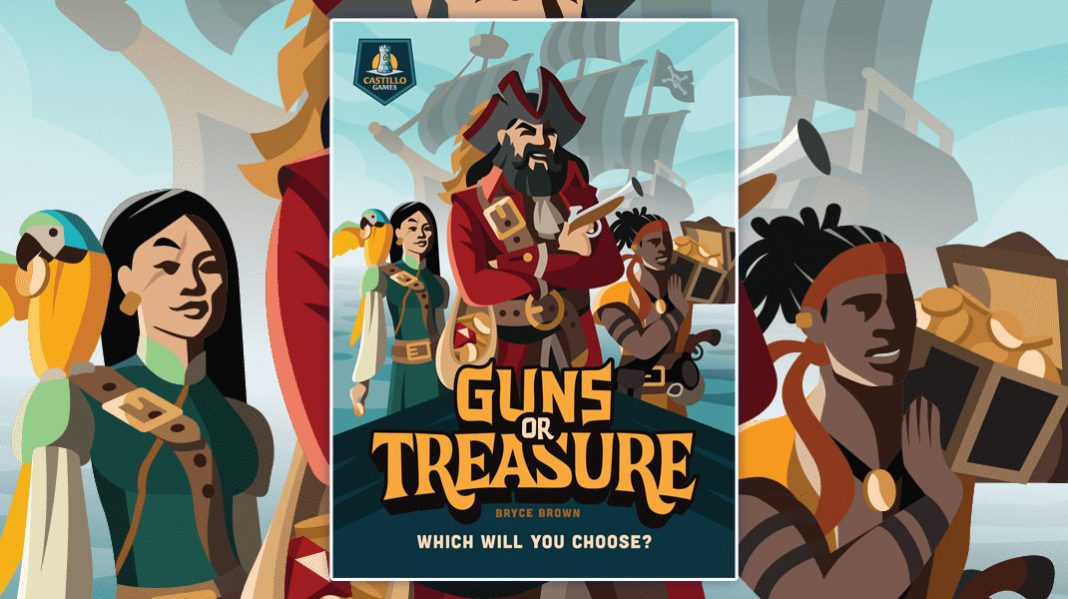 Rival pirates from the seven seas have gathered for battle. Their ships may be a mystery, but one thing is true: They’re either full of guns or treasure. In this light-hearted, fast-paced bluffing game, players draw cards and build their ships hoping to defeat their enemies and get away with the most pirate riches.

Guns or Treasure takes place over 2 phases: The Ship Building phase and The Marauding Phase.

During the Ship Building phase, players simultaneously draw hands of cards over 4 mini-rounds. Half of the drawn cards each mini-round are played in front of them to build their fleet of ships. It’s their choice to start a new ship or add on to an existing one. The first card of a ship is played face up while any additional cards are played on the ship (thematically extending the length of the ship) face down, remaining a mystery.

Each card shows either a treasure or gun and a specific value. Guns are used for battle while treasure is what wins the game.

During the Marauding Phase players will take turns attacking other ships. The current player simply chooses one of their ships to attack an opponent’s ship. Once 2 ships are engaged in a battle, all cards in those ships are revealed and the player with the highest gun-value will be the winner and will receive both ships’ booty. Players must attack on their first turn, but remaining ships can (cowardly) run away allowing the player to keep their own treasure.

We can’t forget about the Bomb cards. When a Bomb card is revealed on a ship both players in that battle explode earning both players zilch. This may seem silly, but the strategic implications are limitless from revealing the bomb to start a new ship, to protecting your biggest treasure haul to using it to eliminate an opponents stacked vessel.

Additionally, players can take on the role of one of the game’s captains. These starting captain cards give the player a choice of 2 unique powers to supplement their pirating cause.

Guns or Treasure also comes with an optional (and essential in my mind) expansion featuring the pirates 2 most loyal friends: the parrot and the monkey. Parrots mimic cards played in a ship and monkeys are worth -5 gold to the unfortunate player who ends up with him. The parrot can really boost a treasure or attack value, but the monkey takes the cake. Nothing is more fun than throwing a battle just so you can stick your opponent with the -5 treasure.

In addition to the base game, there are optional rule variants that allow for longer games, easier games and more transparent gameplay. These aren’t your typical game variants as they add legitimate twists to the game.

The Pirate’s Bluff variant has players place one card face up and another facedown in front of them. The player to the right steals one of the cards and adds it to their hand.

The Captured Treasure variant has players taking the treasure they earned during a victory and adding to that ship—which is still in play.

The Spanish Armada variant has all players contribute to a neutral ship during the Ship Building phase that can be attacked during the Marauding phase.

While there isn’t a ton of different artwork in the game, the ships and captains all have a quality, cartoony style to them. In fact, it was the artwork that initially drew me to the game. Is of note that the artist, Paul Vermeesch, was also behind the well-received game Rescuing Robin Hood (also from Castillo Games).

➕ It’s light, fun and easy for kids and families to play.

➕ This game is so easy to play. The rules are simple, it only takes a couple minutes to teach, setup is almost non-existent and it plays ridiculously fast.

➕ The more I play this game the more ways I discover the game’s depth. I love discovering new potential ways to bluff or deceive my opponents. While it rarely works out like I envision, I feel really clever for that moment in time.

➕ Since it plays up to 6 it’s ideal for parties.

➕ I really enjoy building out your ships. This not only works mechanically, it works thematically.

➖ It’s so light and quick, players might overlook the benefits the game has going for it because it’s over so fast. This may mean playing a couple of times before you really get into it.

➖ You are a bit at the mercy of the draw. There were rare occasions where a player got too many treasure cards and weren’t able to defend or attack.

Families who are looking for a quick filler that provides easy accessibility and enough depth to keep everyone engaged.

The best thing about Guns or Treasure is that despite its ultra-fast play time, each game feels like a mini-adventure as you attempt to stack your ships in a way to outwit your opponents. The anticipation and thrill is real.

I am 100% on board with Guns or Treasure. After 10 plays I can’t remember a game that was such a hit with everyone in the family.

While the pirate theme is fun and silly, it’s really about how the quick and clever bluffing system functions at the heart of it all. The simple task of building your ship by playing cards isn’t complex, but amazingly, it gives you that euphoric sense that you’re about to pull one over on someone… I often found myself chuckling to myself because my plan of attack was so brilliant. This was usually quickly followed by a shocking defeat from my 7 year old.

No one would ever accuse Guns or Treasure of being heavy, but there are quite a few strategic options with each card played that challenge without bogging you down. This starts with the first first card played on each ship representing the ship’s bow. This is the visible card all players see. For instance, you may start out with a heavy-valued gun to scare off potential attackers, or perhaps play a big treasure to either lure an opponent in or make them think twice about the other cards you played on that ship. You could go small to ward off interest and then stack your ship with tons of treasure or maybe trick an opponent into thinking they have an easy score only to discover a ship stacked with heavy guns. This is just the tip of the iceberg. Since it’s all about the bluff, you can mix it up every game for a brand new adventure each time.

At the end of the day, Guns or Treasure is a simple game that’s just a lot of fun. It’s a filler game… a fast game… a family game… a light game… whatever you want to call it, but I can guarantee we’re going to be paying this 10 or 20 times more than some of my favorite big box games. It plays so easy and delivers a big reward for the quick play time. I love that my family can play the game together, but I also just love playing it.