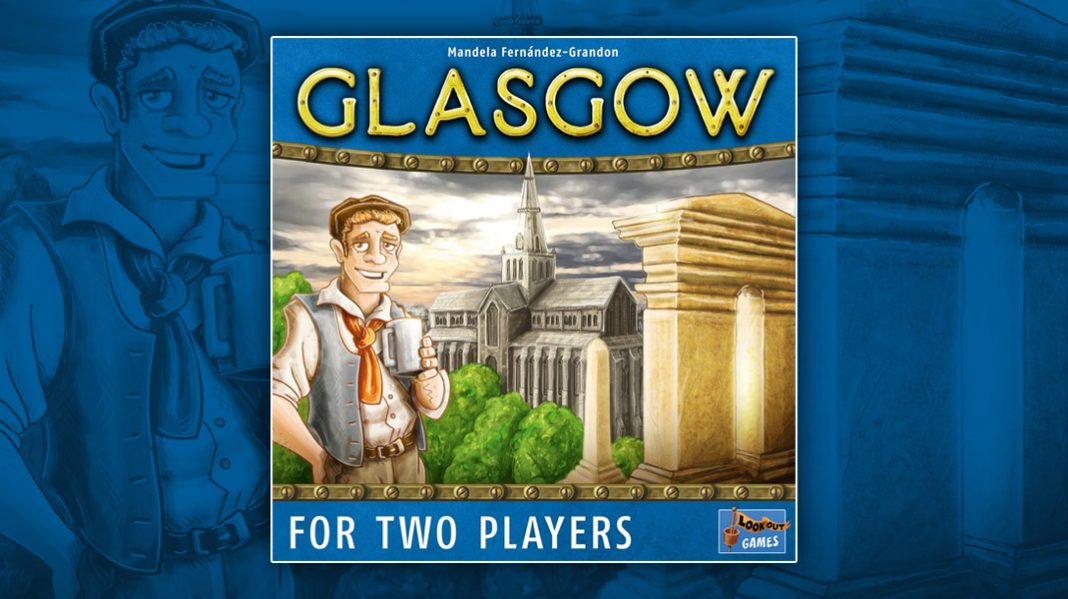 It was back in the 1890s and, aye, do I remember it well. She was a lovely lass, but I dinna expect her to be so skilled a mason. We had been contracted ta build up Glasgow as they prepared to install the ye olde subway system, and so we were racin’ ta leave our mark upon the faire citae, but more faire was my opponent…

Lisboa Light…like, really really light, and not using any of the same mechanics and not about the same city or time period and far happier and…you know what, never mind. Glasgow: that fair Scottish city of never ending rain, cold, and depression…but hey, they’ve got a subway that was built in the 1890s, and you can be a part of the city planning that put it there in this 2-player ring-around-the-rosey tile-laying game of city planning without planning too far ahead.

In Glasgow you and one other player are city planners tasked with building up Glasgow as they put in subway stations around the city to try and make Glasgow a thriving metropolis for ages to come. The game is tension filled as you decide how far around the city to go in order to build resources and construct buildings. The person with the most points from their buildings at the end of the game wins.

Each turn you’ll be moving your pawn around Glasgow by way of the river Clyde to gather resources from contractors or consult architects in order to construct available building plans. The contractors and architects are laid out in a circle, representing the path of the river Clyde and wherever you stop your pawn, you take that action or gain those resources. Whoever is furthest behind will take the next turn. So each player can each conceivably take 2 or 3 turns at a time, and you have to calculate, “Is it worth it to go get that building knowing that they can take everything in between or should I risk them taking that building so that I can build up my resources?”

Each time you take a building from an architect you’ll place it into the city. The city of Glasgow was planned as a grid, so you’ll have to place it into the grid of the city already constructed without going outside the city limits, which is a 5×4 (or 4×5) grid. When all 20 city tiles are laid, the game is over and you calculate the points.

This is a game for two players only.

For some reason the game comes with enough wooden brick, iron, and gold tokens to be set on both boards, but that just creates a fiddly mess. We put all extra pieces in a bag and just  kept one of each token to move up and down the tracks on our players boards. It would have been better if the boards had zero spaces and you were expected to just move the markers up and down. You can’t hold more than the max amount in storage anyway. Once you have 5 brick (or 3 gold coins, etc) you can’t accumulate any more. The art on the buildings is fairly plain, but fun. All the building, contracting, and architect tiles are made of sturdy cardboard punch outs, and the merchant meeples are good quality wooden meeples. The whiskey barrel in particular looks great and is fun to fight over! The only component that was neglected was a score pad, because there wasn’t one! But this game should have one since it can be easy to forget some of the special scoring rules, although they are on the back of the rulebook.

This is not a knock-your-socks-off game. We bought it because my wife said, “Hey, it sounds like ‘Lisboa (by Vital Lecerda) Light’. Well, it’s nothing like that at all with exception that the theme is building a city. That being said, it’s a fun, tight, tense little 30 minute romp that I can see coming out regularly on evenings when we don’t have time for anything else.

I don’t think we’ve had a game of this go over 30 minutes, even when we were learning to play. It’s quick, although every turn feels full of tension as you’re trying to decide the best way to get what you need without giving away everything to your opponent.

Hardcore gamers might turn up their nose at this game, because the mechanism is just move your pawn around the circle, take the stuff, move it again, take the stuff, until you’re in front, then wait. If you land on an architect, pick a building available there and place it into the grid. I suppose it could come across as fairly abstract; but if you’ll engage the imagination the artwork goes together really well to create a fun, if slightly dry, picture of Glasgow, Scotland. But also fun and beautiful on this particular game night…

…admire her I did, but I couldna let her ruin me, so I was forced her take things into me own hands. I knew gettin’ train stations near me parks and tenaments and landmarks was a surefire way to make sure that no one would think twice about hirin’ any other builders. So I set about layin’ down the designs and buildin’ which put that pretty lass at quite the disadvantage. While I hated to see her not fulfill her dreams, I loved watchin’ her work. I could just set back with a good ol’ glass o’ scotch whiskey and dream of the life we coulda had together.

Wes “Drinkin’ a Bit Too Much Scotch There” Green—50

This is one of those games that fills a niche for us. We try and get a game in every night, but with two working parents and 5 small children, there is not always time for that. This game, however, fills a nice quick 30 minute window with something still reminiscent of the heavier games that we love. This one will be coming off the shelf often on those otherwise full nights that still need a game to be played.