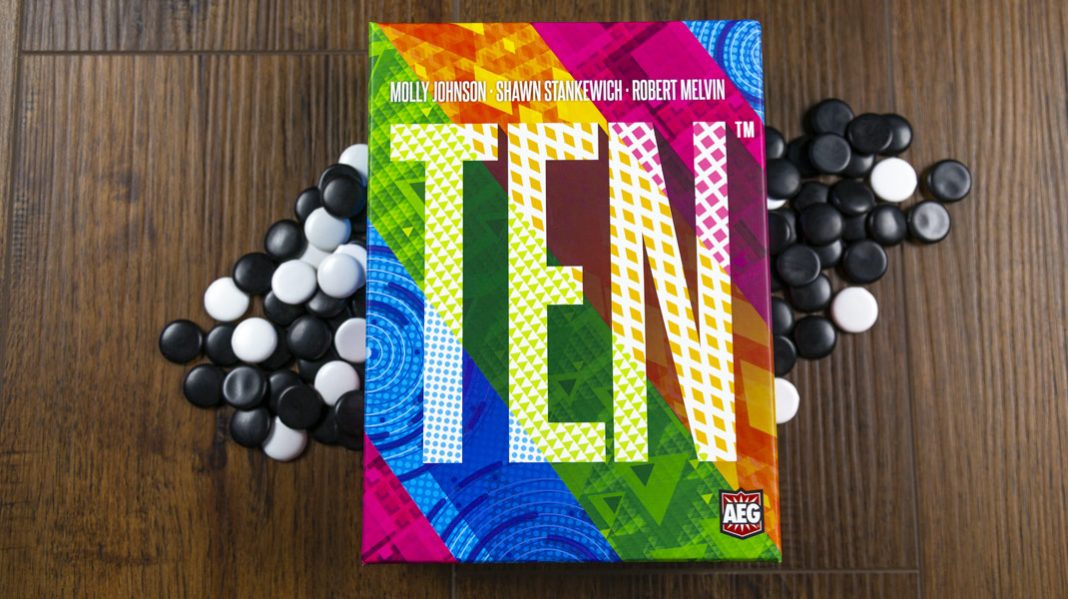 This is the place in my reviews where I typically set the stage for the game by delving into the rich theme and lore baked between the confines of this cardboard encased experience. But in the case of TEN there isn’t a backstory full of happy vegetables, brave adventurers or ambitious railroad engineers… It’s just a game with a giant deck of cards individually numbered from 1 to 9… and there are some tokens. Then I noticed the designers are the same team behind Point Salad, the simple, yet hugely successful vegetable drafting game… and I realize there might be something more to TEN than meets the eye.

TEN is a push-your-luck, auction/bidding style game where players risk it all to build runs of 4 different color sets. Drawing more cards can mean bigger points, but your aggressive choices may benefit your opponents while pushing too hard may force you to bust. Despite the generic theme, TEN has everyone engaged on each player’s turn with the opportunity just a card flip away to turn your fortunes around (for better or for worse).

TEN is a relatively simple game to get to the table. You give everyone 5 tokens, which serve as currency and place the deck of cards in the middle of the table. That’s it! You’re ready to go.

The deck is made up of 4 suits (green, orange, red and blue) individually numbered 1-9, a variety of wild number and color cards and currency cards.

The goal of the game is to score the most points and that’s accomplished by stringing together sequential numbers within each of the 4 suits. Players score a point per card and only score their longest set within each suit. Completing a set, 1-9, earns the player an additional point at the end of the game. In addition to the number cards, there are also wild cards. These wild cards might feature a number and a wild color, a color and a wild number or combination of the two.

On any turn, the active player draws a card from the deck, one at a time, playing them face up in the middle of the table.

There are a number of things to consider when drawing cards. At any point you can stop drawing cards and collect the numbered cards you’ve drawn. That is unless your cards total more than ten. In that case you bust and can’t collect any cards.

Additionally, there are currency cards. These cards subtract from your card total. So you may have a total of 7 from your number cards and a 4 in currency cards giving you an overall total of only 3. Drawing over ten in total currency will also cause you to bust. Otherwise, you can keep drawing until your heart’s content.

Now players do have the opportunity to take their number cards at any point, but they may also choose instead to select the currency cards. Currency cards are exchanged for tokens which allow you to purchase “busted” cards from the market. Subsequently, when a combination of number and currency cards exist on the table and the number cards are chosen, all other players receive currency tokens equal to that number of currency cards (unto a hand limit of 10).

A player who busts (getting over 10 in either number or currency cards) receives 3 tokens and those number cards are placed in the market available to any player on a future turn. Even on a busted turn other players receive currency tokens equal to the currency cards. In order to purchase a card for the market, the active player must have a successful turn drawing number cards without busting. They then can exchange tokens equal to the number of one of the cards in the market. In addition, number cards can also be used as currency to purchase market cards.

The final consideration when drawing from the deck is when you draw a wild card. When these are drawn they immediately enact a one round auction where, starting with the player to the left, players may bid on the wild card. The winner of the wild card is resolved and the active player continues their turn.

The deck fluctuates based on the player count, but when it is finally exhausted each player gets one more stab at the market and then scoring takes place.

TEN is composed of a deck of 129 cards and 65 tokens. The cards are pretty standard. They do have a nice spot gloss on the back, but the black edges on the back of the cards have me worried they’ll show wear sooner than later. The tokens aren’t terribly cheap, but again, they’re nothing to write home about. It’s a fine production, but this is a family game with mass-market appeal and they probably made the right decision not to get too crazy in order to keep costs down.

The artwork features a series of abstract shapes and designs. It’s light and shouldn’t rub anyone the wrong way. As you overlap runs of a specific suit, the pattern on the cards will align. It’s a silly thing, but it does add to the satisfaction of setting up a long run.

While it took me a minute to iron out the rules on my first play, TEN is a very easy game to grasp. I typically found playing a mock round with new players cleared up any questions they had regarding the rules. And this is where TEN wants to be: an accessible, family-friendly game that combines simple mechanics with some fun, interesting decisions.

TEN could be described as a filler game since it’s easy to set up and plays quickly, but I could also see this being the main dish for certain families and groups. This is the kind of game you can play with kids and adults, and gamers and non-gamers alike.

There is a decent amount of luck in the game, but it’s the good kind of luck. This is a game you play because of luck. That’s not to say there aren’t interesting decisions to be made. The push-your-luck piece has some serious consequences. Failing to push it hard enough and pull enough cards could leave valuable points on the table. Pushing too hard could leave you with an empty turn and equip your opponents with currency tokens to spend freely.

I do have to talk about the game’s interaction. It is a game where you can sit around and chat during the game, but everyone is still engaged on each player’s turn. Whether it’s the chance to bid on a wild card or root for your opponent to bust and refill your currency tokens, there’s always something to keep your interest.

For a small, simple game, there is also a lot to consider on your turn. You may choose not to draw too many cards from the deck and risk a bust because you’ve got your eye on one of the cards in the market. Should I bid big to grab that much needed wild card? Should I dump my number cards and take the currency in a defensive move to keep my opponents bank accounts at bay?

Despite the choices, it’s all neatly put together in an accessible package. Even the generic theme plays to a mass audience. When I play family games we always have that person who doesn’t want space games or fantasy games. While some might not love the generic theme, there is nothing divisive about a deck of numbered cards. That may limit some players’ enjoyment, but in my experience, it definitely increases the number of times we’ll get it to the table.

I think TEN has a good amount of replay ability. It’s easy to get to the table, quick to teach and has some interesting decisions. The luck element drawing cards from the deck guarantees a new game each time and the bidding plays out differently because you’re always in a different place with different needs when the wild cards pop up. I’ve logged 10 plays so far with a number of different level gamers and everyone has loved it and wanted to play again. I could see up playing this for some time going forward.

I received TEN along with a couple more complex, pricer games for review at the same time and TEN has dominated our gaming table. A lot of times lighter, filler-style games just aren’t interesting enough to keep around. That hasn’t been the case with TEN. I love the bidding element and the market. Choosing when to spend your currency and deciding when to push-your-luck drawing cards. It’s such a fun, interesting combination of mechanics that really appeal to me and to everyone I play games with. I love that it’s something everyone can agree on when it’s almost impossible to find that game anyone agrees on. TEN has been a hit with me and I feel comfortable recommending this to nearly everyone.