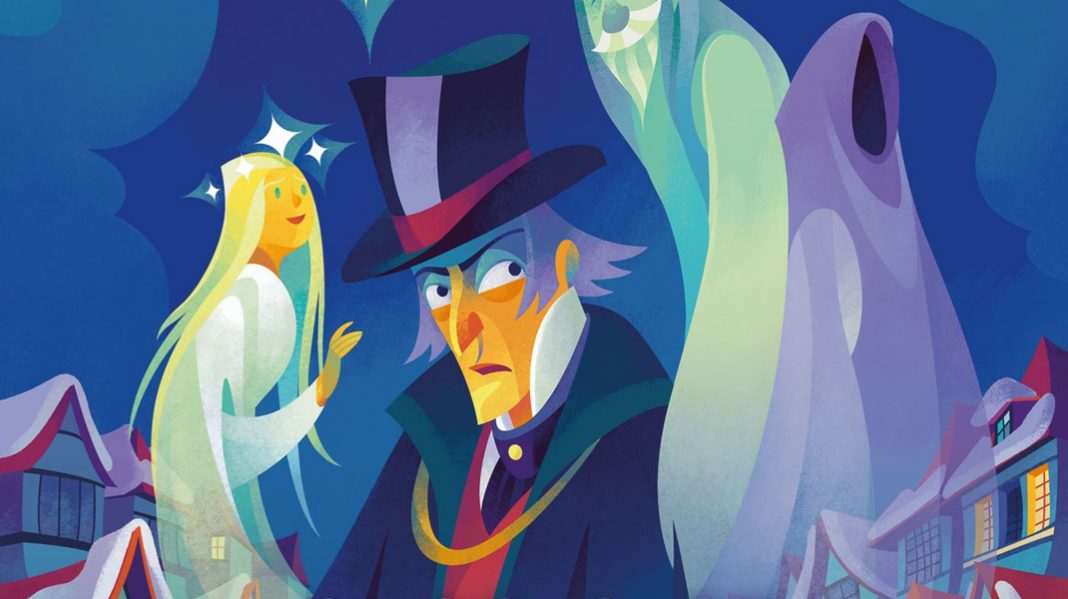 I imagine if Charles Dickens was into card games, Ghosts of Christmas would be right up his alley. Themed to honor his classic Christmas story: A Christmas Carol, players will be competing to earn tricks across the Past, Present & Future in this quick moving, family friendly game.

To begin, players are each dealt 12 cards from a deck featuring 4 different colored suits, each ranging in value from 1 to 12.

A small scoring board sits in the middle of play along with 3 Era Dials. Players each have 3 ghost tiles representing the ghosts in the Christmas Carol story. Additionally, players have access to door tokens which will represent their bid for that round.

During a round players take turns playing cards in each of the 3 ghost eras in front of them. The first player to play in an era gets to define that era’s card color for the remainder of the round by adjusting that ghost’s Era Dial to that suit. Players will then either follow suit by playing that suit in that era or define a color for another unclaimed era.

The goal is to not just to play the highest cards and win tricks, but to achieve the bid you placed prior to the round. There are 2 ways to bid: The first is to play a number of purple door tokens which will earn the player 2 points for each bid met, but will require you to achieve that exact number of bids. The other option is to include a red door in addition to the purple doors. This allows the player to win the number of purple bids or the purple bids plus the red bid giving you a little more bidding flexibility. The downside is you only earn less per door when the red door is added.

The game comes with yellow, blue, green and red colored cards that all feature light-hearted illustrations from the story. Each color will define a trick, but the red suit also serves as the trump color and can only be played when you don’t have the necessary suit for that era.

A game consists of 3 or 4 hands depending on the number of players. Each hand is composed of 4 rounds and each round has 3 tricks. The player with the most tricks won at the end of the game is declared the winner.

Ghosts comes with 3 different game variants to fit your personal play style. The standard mode, which has previously been discussed, the Beyond Variant and the Tiny Tim Variant.

The Beyond Variant brings an additional era into the game giving players a chance to bid in 4 locations instead of 3. Once we played this option it just made sense to continue playing it from then on. It doesn’t subtract anything and adds more game to enjoy.

The Tiny Tim Variant removes the bidding aspect and allows players points for each trick they win along with a base number of points and a ceiling to ensure no one runs away with the game. This version works best for young and inexperienced trick takers.

Ghost of Christmas has 2 player count options: 3 or 4 players. Both game modes feel very similar with the only difference being 1 more hand in the 4 player game. I think the extra hand is there just to allow players a little more room to separate themselves from their competition. Overall, the game played very similarly at both player counts and I would recommend either one.

This is a small box game that seeks to pack as much as it can in the box. The card quality and cardboard tiles are just ok, but overall, the components are fine. There isn’t anything here that would detract from you enjoying the game. I would highly recommend the deluxe component option that includes a fun top hat token for the first player and chunky 3-D wreaths to help you mark your tricks. These definitely improve the feel and (dare I say) the overall experience of the game. After a few plays the era dials still seem tight and I don’t foresee any issues with them moving forward.

One area I continued to have problems was the point board. It’s so small that the slightest nudge may knock you off your space leading to endless debates on how many points a player REALLY had. I suppose you could tally your points separate from the board, but I like having it in front of everyone and we were most able to work with it.

The rulebook is very concise, opting for more of a simplified explanation of the game. I could argue that they could have provided a little more explanation, but I think the instructions are adequate and should get you playing the game fairly quickly.

The game’s artwork is colorful, stylish and fun if not a bit minimalistic. It certainly contributes to the overall class of the game and provides a lot more mass appeal. Each color is also paired with symbols for any color challenged players. Overall, I approve of the look and production as a whole.

I’m a fan of trick taking games in general and anyone familiar with games like Spades are going to feel at home here. Ghost of Christmas does provide some nice twists to keep things fresh, but the game is fairly straightforward and easy to follow.

Being able to play tricks, and define the suit for multiple areas of play in each round definitely increased the level of strategy. While it seems the players with the highest suit numbers will be unstoppable, there are ways to draw those cards/players out and spin a suit in your favor. I often found playing multiple eras with the same colored suit really forced my opponents to pick and choose where to play their strengths and I was able to win a trick or 2 even with a weaker hand.

The components certainly add to the enjoyment of the game. Sure, the dials weren’t 100% necessary, but they help a lot with communication and add a lot of personality. As I mentioned before, the deluxe components really help from a tactile standpoint and do make the game more fun.

I also want to talk briefly about the theme. I have a number of Christmas themed games typically ranging from poor to modest at best, so I’m always up for a new Christmas-themed game in hopes it will turn the tide and give me something to look forward to during the holidays. In this case here, the theme is pretty much painted on. There really isn’t anything thematic in the game play other than the 3 eras that represent the past, present and future. That is… until you add the 4th (Beyond Era) and ruin the facade – which I preferred mechanically anyways. That being said – I’m ok with this. I don’t have to take on the role of Ebenezer Scrooge or Bob Cratchit to enjoy a game set in this literary world. I think it all comes together in a game you’ll feel comfortable with playing in July as much as you’ll enjoy in December.

The final area of the game that really stood out was the bidding. Yes, there are a number of like-games that use similar bidding systems. That doesn’t change the fact that your opportunity for success greatly rises and falls on your ability to properly assess and manage your hand as well as read and outwit your opponents. It can be frustrating when you’re unable to meet that optimistic bid, but I really enjoyed getting creative in an effort to avoid that extra trick that might earn me too many points. The Tiny Tim variant that eliminates this aspect flows a lot smoother, but it’s also a lot more sanitized. The bidding is certainly right for those looking for a little more bite in this game.

Ghosts of Christmas is a great family game for players looking for a more traditional card game experience with a fun theme and a few twists thrown in to keep you on your toes. The different game modes allow you to break this out during the holidays with either the in-laws OR the nephews. The learning curve is small – which can be essential when you’re trying to play games with family you only see a couple times a year. There are some more engaging trick taking games out there, but if the theme hits you just right then you really can’t go wrong picking up Ghosts of Christmas from Boardgametables.com.