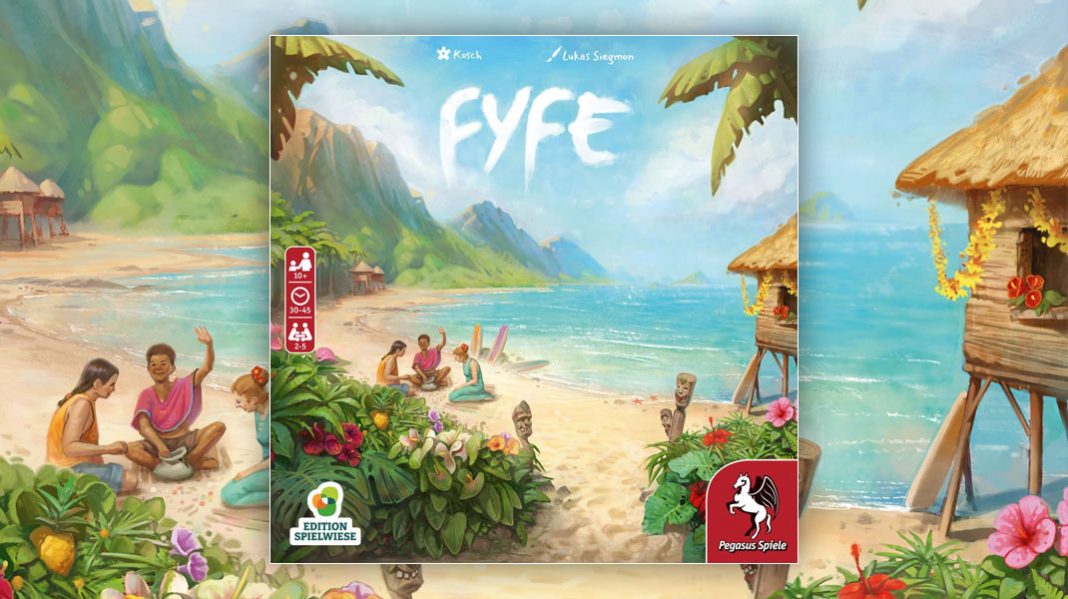 Set in the picturesque South Seas surrounded by palm trees, blue seas and plenty of sandy beaches, FYFE has you sifting through the sand, collecting treasures and sorting them to earn the most points.

FYFE places you in control of a 5×5 scoring board where you’re in charge of both placing your discovered tokens and determining their scoring objectives. Players compete for scoring goals and activate special abilities with their lucky charms.

Each player begins the game with a dual-layered player board, 15 surf-board shaped scoring boards and 7 lucky charm shells.

Players begin the game by drawing 2 item tokens from the bag and place them at the base of their player board. Each player board has a 5×5 grid to place item tokens as well as indent spaces next to each row, column and angle. These indents provide a space to place your scoring boards.

During a turn, players will choose one of their 2 available tokens and place it on an open spot on their player board. Then they will select one of the scoring boards from their supply and place it an open indent horizontally, vertically and even diagonally in relation to the token they just placed.

Each surf-board shaped scoring board has its own objective requirements. These scoring objectives drive your token placement throughout the game. Each token has 3 distinguishing parts (numbers, colors and individual items) that will be used to achieve objectives. When played, the scoring objective will be applied to that row or column of tokens. Each of a player’s 15 scoring boards are different and it’s up to that player to choose the scoring goal they want to pursue for that particular space. For example, scoring boards may require you to have 5 tokens of the same colors, arrange tokens numerically in ascending order or have a specific arrangement of items. These are just 3 of 15 unique scoring board options each player has.

As you place these scoring boards they will intersect with other rows, columns and angles effecting and ultimately challenging future token placements.

Players earn additional scoring goals by being the first player to earn a specific scoring board objective or achieving multiple scoring goals with the same token.

As the game progresses, players continue to draw a single token from the bag each turn to replace the previous one they used. Players may also end up drawing a lucky charm token. When a lucky charm token is drawn, all players choose from one of their 7 unique lucky-charm shells. The shells allow you to do a variety of actions like moving tokens around your board or replacing tokens in various ways. These can be beneficially, but unactivated lucky charm tokens earn end game points, so you have to weigh the cost with each move.

Play continues until players have filled their boards. At the end of the game the player with the most points is the winner.

The standout component for FYFE is the uniquely shaped player boards. These almost abstract boards reflect nicely on the sand theme. They’re dual layered so they hold the item tokens well. The scoring boards fit nicely around the edges giving the game a fun and uncommon look on the table. Playing with the wooden tokens are a nice touch making it easy to pull from the bag and place on the board. The surf-board shaped scoring boards definitely add to the fun.

The artwork aside from the box cover is fairly limited. The individual tokens each feature fun island-themed icons that are colorful, but don’t stand out too much apart from that. I struggled with the icons’ lucky charm shells. They weren’t quite as intuitive as the rest and I found myself constantly referencing the rulebook for these abilities. It would have been nice to have a player aid here.

One problem I had was with the player boards warping slightly. I know this is due to the dual layer cardboard pairing and does tend to happen. I tried to gently bend one board back into shape and a small crease began to appear. Playing with the slightly warped boards isn’t ideal, but they’re not so bad that they affect the game play much. I imagine I can put weight on them over time and iron them out.

➕ Easy to learn, hard to master

➕ Fun theme that should entice both gamers and non-gamers alike

➕ Simple rules make this accessible for the whole family

➕ Challenging decisions for all ages

➖ Some mechanics didn’t impact gameplay like I would have liked

➖ Warping player boards are a bummer

➖ Interaction isn’t terrible, but doesn’t drive game play that much

Players that like deep puzzle games with simple mechanics like Azul or Sagrada are going to find the most to like here. Anyone can pick up FYFE, but it’s going to take some practice and strategy to become truly successful.

The best thing about the game is how challenging it can be. Not knowing what tokens you’ll draw forces you to hedge your bets when selecting the placement for your scoring boards. No matter how you spin it, you’ll always face tough decisions where you have to choose one scoring objective over another.

FYFE is a fun, quick puzzle game that was an instant hit from game one with everyone who experienced it. A lot of the initial positive impression was due to the super simple ruleset—5 minutes or less in and you’re ready to go.

The game decisions ramp up as play progresses giving you a bit of a learning curve before you’re faced with more challenging decisions. Mechanically, you’re pulling tokens from a bag and choosing between 2 to place on the board. Where things get dicey is the scoring objectives. After playing the token you have to place a scoring board on one of the player board’s notches. This creates a permanent (mostly) goal that that specific row, column or angle of 5 tokens has to achieve to earn points. Where things get even dicier is when you realize playing an objective on a row doesn’t just affect that row, but every single column it intersects with.

I think you can place 5 or 6 scoring boards and still feel fairly confident in your plan. As the objectives increase it becomes a lot more chaotic and it’s obvious you won’t be able to achieve all your goals and you end up abandoning some for higher point options or more realistic achievements.

The lucky charm shells are supposed to provide ways to “cheat” the system by manipulating tokens on the board in abnormal ways. This is nice in theory, but it didn’t always play out like I feel it should have. For starters, you have to weigh the fact that every unused shell earns points at the end of the game. On top of that, these lucky charm tokens are completely random and don’t always arrive at the right time. I often found myself passing on using this “special” bonus because the risk reward didn’t add up. There are a couple that felt “worth it”, including some that change regular tokens into “jokers” that are basically wild tokens. They are nice, but there were many shells that I quickly rejected from the get-go.

Something that might rub someone the wrong way is the lack of connection between the theme and the actual mechanics. While the theme is attractive and inviting… It’s nothing more than a nice theme. This wasn’t a huge disappointment for me, but I would have enjoyed some additional connections here.

I’m a little on the fence about replayability. While every game will be different you’re still doing the same things over and over. I think familiarity with the game, the shell icons and your own personal strategy has the potential to increase your enjoyment over time. On the flip side, I also feel there is the potential for burnout with repetition. It is a think-y puzzle and that’s something you’ll either embrace and love or reject, feeling betrayed by the expectations of a more casual experience.

The quick playtime and challenge is a high point that should be considered. This is a game that’s easy to set up, quick to play, but still provides a really interesting challenging experience. I’m not sure how many plays it will take to master FYFE, but I can tell you I’m a long way from it.

The game’s interaction could have been stronger. This is far from a solitary experience, but the only interaction is when you draw a lucky charm or earn bonus points by being the first to fulfill a certain objective type.

Despite my personal objectives, I think a lot of people are going to enjoy this puzzle. I already spoke at length about the accessibility—how quickly you can onboard new players. I think the real jewel is how different players of different skill levels are going to interact with the puzzle. It’s going to meet them where they are and force them to solve it by their own devices. While you may be the better strategist, the luck of the draw can serve as the great equalizer, giving a less-experienced player the advantage. That’s not to say you can’t mitigate that luck, playing the odds and putting you in a position for greater success. The later game chaos will force more over-thought for some, but it’s a sweet chaos because you built it. You don’t always end up with the tokens you want and there is disappointment, but there is also a lot of satisfaction when you draw the right token at the right time and earn a cool 18 points for one play.

If you’re a fan of games like Azul or Sagrada and like the idea of a family-weight game with some deep strategy and think-y turns, FYFE is right up your alley.