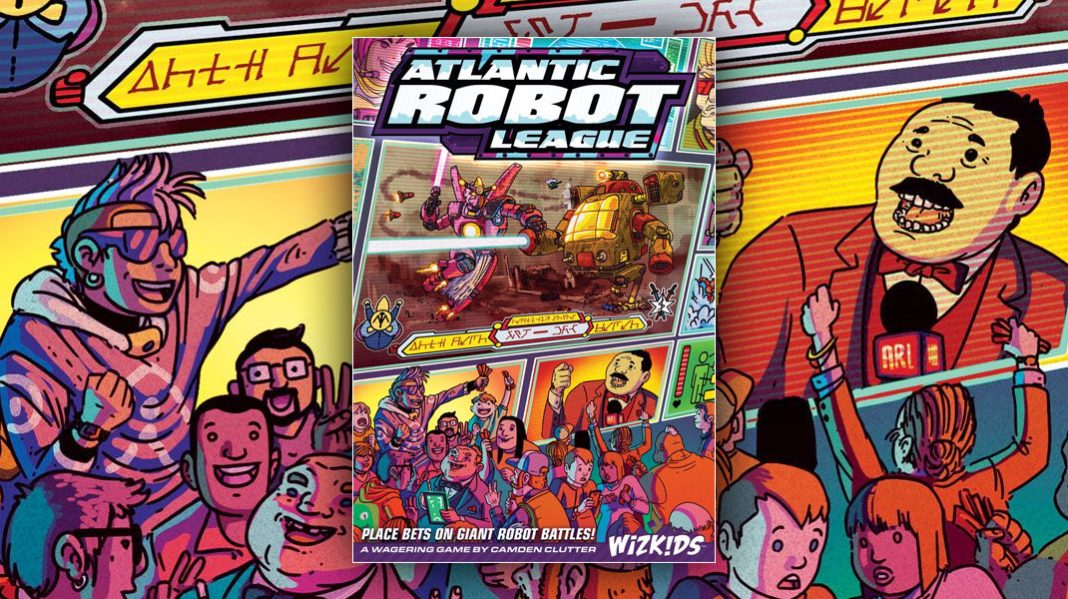 In the distant future the sport of mech battles has swept the nation. But not just any mechs, these are monstrous, mile-high mechs and the battles rage over multiple city blocks. While the sport has captured the imagination, the chance to bet on the outcome and earn big bucks has taken it to a new level. Now it’s your chance to get in on the fun. Choose the winning teams, the surviving mechs and even participate to manipulate the outcome. Place your bets, enforce your will over your opponents and seek to have the most success betting card.

In this fast-paced betting game, players will pick winners in multiple categories. Taking turns, players will then strategically slide the mech tiles across the playing grid, interacting with other mechs and seeking to achieve their end game betting goals.

For some reason I love betting games. I like the opportunity to push your luck, weigh the odds and turn my resources into a profit… as long as it doesn’t involve money from my own wallet.

Atlantic Robot League is a betting game where you forecast the winners of this Royal Rumble-type mech battle. Each player receives a betting card and chooses winners in 4 categories.

There are a total of 24 mechs tiles, all with individual identities and divided into 5 distinct teams. At the start of the game they are randomly placed on a 5×5 grid leaving 1 empty space.

On a typical turn, players will be able to slide a single tile to an adjacent space given that one is available. As the mech tiles are moved, they then have the ability to interact with specific mech teams. So a green mech might have the ability to eliminate a red or yellow mech. If that mech is moved into a position adjacent to one of those colors, the player then can eliminate one of those tiles from the game.

Each player starts with money and can gain additional coins by eliminating tiles on specific locations on the board. This money can be used to purchase scheme cards that allow you move in ways that break the standard ruleset. For example, a scheme card may allow a tile to leap over another tile or move additional tiles. As this resolves, players keep track of their personal bids. Tiles are eliminated until there are 5 or fewer remaining.

The game takes place over 3 rounds where the game is reset prior to the round. The player with the most points at the end is the winner.

The art in Atlantic Robot League is colorful and almost comic book like. This makes sense since the game is about mile high mechs doing battle… you can only imagine who the target audience is. It’s not the greatest artwork ever, but it really seems to fit the theme well. The game board is kinda trashy in the best way. The mech illustrations are all unique and are fine-on par with the rest of the game’s visuals. Each team has it’s own logo and they feel very e-sport-y and a bit disconnected from the game.

The game board, tiles, cards and coin tokens are all of good quality. The betting boards are made to be erased and they seem like they’ll last.

Overall, the look and feel of the game doesn’t really stand out, but it seems to fit the theme well.

➖ Theme will turn some off

If you like betting games, Atlantic Robot League is easy to engage and strategize with little experience. The actions are simple, but there is still a layer of strategy to force you to think through your actions each turn to maximize your money.

The best thing is the simple game actions. There are just enough choices to keep the game interesting while still being light and fun to a general audience.

Atlantic Robot League isn’t going to win any awards, but as a fan of betting games, I had fun with this easy, breezy, large-that-life-themed, game geared toward overgrown adolescents.

I enjoyed that I could formulate a plan of attack from the get go—analyzing the board layout to help me determine my betting goals—in a matter of minutes. The game never takes itself too seriously and choosing the winners and losers of the battle prior to gameplay is strangely engaging.

The actions are incredibly simple, yet there is just enough strategy and gamesmanship to keep things interesting. I would have liked the scheme cards, which provide special actions, to be more relevant. The available actions didn’t always apply to the current state of the board or wouldn’t affect play in a meaningful way at that time. That being said, players have a fair amount of control over the outcome making the pursuit of your betting goals more exciting.

I remember playing a similar game recently from a large publisher who went for an over produced approach with miniatures, big name artists and bloated actions. I couldn’t help comparing the two and think how Atlantic Robot League’s slimmed down approach was much more successful making the choices easier yet not a bit less meaningful.

Overall, I think Atlantic Coast League is a fun, light-hearted betting game. It’s super accessible and still manages to incorporate a fair amount of strategy. The theme has the potential to be a little divisive—only because mile-high mech robots aren’t for everyone. If you have the chance, give Atlantic Coast League a try.