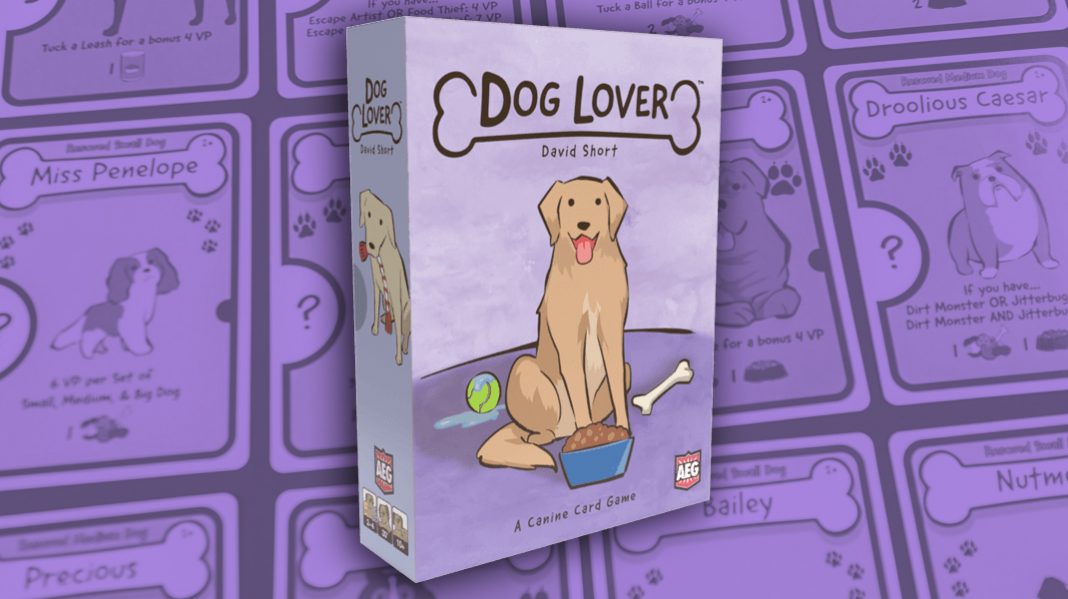 Any dog lover can attest: in addition to the enjoyment, companionship and adventure a dog provides, they can also be a lot of work. Each dog has its own unique character that will affect how you train it, feed it and interact with it. In Dog Lover, you’re caring for unique dog’s that you’ll feed, walk, train and play with. You may want to rescue a pet from the shelter or discover your pet’s unique traits that make them special.

Dog Lover is a set collection game where players will be drafting cards from a grid, earning trick cards to expand your drawing power, selecting new dogs to live in your collection as well as cards to feed, grow and develop your pets. Earn points in a variety of ways such as discovering your pets’ unique traits, collecting things for you pet to pay with or building a strong collection of dog bones. The player with the most dogs at the end isn’t always the winner and there are a number of paths to victory in the family-friendly themed card game.

The game’s deck features 29 different breeds of dogs each with their own name and appetite. To begin the game, you’ll be assigned a dog and a starting trick card.

A grid of 9 random cards will be placed in the center of the table along with 3 additional trick cards and 3 rescue dogs.

During a player’s turn, players will draw a series of cards from the grid equal to the grid shape on one of their trick cards. These shapes feature a variety of stacked and abstract squares corresponding to specific positions on the grid. Players can rotate and move the shape around to try to gain the best cards available.

The grid also features a watchdog token sitting next to one row or column on the grid. Players are limited to drafting only 1 card from that row or column limiting their access. After drafting, the watchdog moves to a new location to guard cards for the next player.

This is a card game that features a 120 card deck in addition to advanced tricks and rescue shelter dogs… so what’s in the deck and what do I do with the cards when I draft them?

This is a set collection game and there are a number of different ways to score points. One way is through gathering dogs. The best news my daughters will ever hear: You can have as many dogs as you can get your hands on. Dogs come in 3 sizes: small, medium and large and only score points as long as they’re fed. Each dog has a unique appetite and it’ll be your responsibility to gather the necessary types of food cards to feed your dogs. Failure to feed your pet will lose you 2 points per unfed dog at the end of the game.

Dogs can also be paired with trait cards. Trait cards give your dog a personality that might allow the dog to eat a different type of food or tuck cards behind that dog to earn additional points at the end of the game. A dog can only have 1 trait card and specific trait cards can only be attached to certain size dogs.

There are training cards that can be tucked behind a dog to score end-game points or collected to purchase new trick cards that give you different patterns to draft cards with. But remember: unfed dogs will not score any points tucked behind them.

Adoption cards can be gathered together to earn dogs from the rescue shelter. Rescue dog cards each feature unique abilities that may break the rules in how you tuck cards or score points for that specific dog.

Favorite thing cards are stuff dogs enjoy such as a Frisbee, leash or toy. You score these by collecting the most unique favorite thing cards. Finally, bone cards earn or subtract points based on the number of fed dogs in your collection.

Finally, one player begins the game with the fetch card allowing them to draft an additional card from the grid from any spot (even if it’s forbidden by the watchdog). The fetch card then takes the place of that chosen card and can be drafted by another player on a future turn.

Dog Lover plays pretty well at any of the 2-4 player counts primarily by adjusting the deck for the number of players. Cards in the deck are labeled 3+ and 4+ so you know which cards you’ll play with based on your player count.

This is a card game, so the majority of the components are cards. The card thickness is fine, but I found them to be strangely slick to where they kinda went all over the place. It wasn’t the end of the world – just something we had to watch out for. There are 4 different colored wooden cubes representing each type of food that you collect. These are gained when you draw a food card and you put them on top of the dog cards to represent them being fed. These were a nice addition because it gives you another dimension to an otherwise flat game and helps you immediately identify which dogs have been fed. The watchdog token is another wooden token that dances around the grid throughout the game. It’s a fun addition to the game that contributes both to the gameplay and theme.

The artwork in the game features loosely drawn pets, toys and various pet paraphernalia and is meant to be light, silly and accessible. I personally felt the artwork was a huge missed opportunity. I completely get what they were going for, but I feel it missed the mark. They had an opportunity to really infuse value and engagement to the theme and the artwork just comes across as lazy. My wife, on the other hand, liked the artwork and said it provides accessibility to the game… so there are obviously contrasting opinions on this issue. I just feel they could have spent a little more time, even within the cartoony style, and really hit this one out of the park. A pretty big misstep on this front for me.

So you’re probably playing Dog Lover because you have a dog, love dogs or maybe even just like them a little. That’s pretty much 99% of people in the world – so this game has a lot of appeal right out of the gate. I imagine the designer and developers knew that the baked in appeal put the odds in their favor. But once you get past the cute theme of taking care of your pet, is the game engaging? For me, it’s a bit of a mixed bag.

Let’s start with the positive: There are some fun mechanics and it can be a challenge to maximize your scoring opportunities.

I enjoyed the trick cards combined with the watch dog when it came to drafting from the central grid. The game can be played where each player starts off with an identical starting trick or asymmetrical tricks earning each player 3 cards in different ways. The watch dog is always going to be in that one space you really want to draw from, but there always seems to be some positive move each turn. Additional trick cards might earn you the opportunity to draw 4 or 5 cards on a turn, but often find limited opportunity due to the lurking watchdog.

The game’s set collection is creative and often forces you to choose between 2 scoring paths. Should I go ahead and score my single training card or save up to trade them in for better tricks. Gathering a unique favorite thing card can earn you decent points, but it’s the “unique” part of that collection that can be a chore. I also enjoyed gathering bones. The number of bones you have determines how many points you score per fed dog at the end of the game. This is great, but if you only gather 1 bone card you lose points and there aren’t that many bone cards to go around. While the different scoring sets didn’t always work thematically, I still enjoyed the process.

Speaking of feeding your dogs. It’s great to have a bunch of dogs in your collection, but you have to feed those dogs and that upkeep can really use up your turns.

The trait cards and rescue dog cards instantly give you different goals in the game that allow you to score cards in different ways. Since these can really change your focus in the game, these are often most beneficial earlier in the game, but can still help you out down the stretch.

Obviously the artwork didn’t work for me. While there are some fun aspects to the set collection, this game is really about the dogs. Each dog in the game has its own breed and name and I think there was an opportunity to drive home that sentimentality. Unfortunately, the rendering of each breed is kinda blah and really fails to connect. There’s even a rescue dog that comes with a little cart because it’s missing 2 legs – such a great addition – missed opportunity.

I might get some push back, but this is a fairly quick and light game and setup should be equally quick and light. I absolutely hated what felt like jumping through hoops to set up the deck for my player count. It’s not the end of the world, and the game’s designer does their best to identify the player count on each card, but going through the 120 card deck was no fun. Additionally, you have to draw out all the game’s dogs to distribute them at the beginning and then shuffle them back in the game and it all ultimately added up to a bunch of chores that suppressed the early momentum of the game for me. This might seem overly nit-picky, but when it comes to playing a fun, light, gateway game with friends, the last thing I want to do is shuffle through a large deck, drawing out a bunch of cards and reshuffling a couple times. It’s probably not as bad as I remember it, but it’s that memory of those past experiences that might make me hesitant to pull Dog Lover off the shelf next time.

Teaching the game is pretty quick despite all the different ways to score and this is a huge positive for a game appealing to a general audience.

Dog Lover, despite having a pretty bad name, is a pretty engaging game. I think it’s going to appeal to a wide audience and introduce some fun, unique mechanics to non-gamers. The idea of taking care of your dog, feeding it, training it and taking it for a walk is really something I want to play. I’m sad the artwork didn’t help the game soar like it should have. I did get bogged down in the setup and tear down and that makes me hesitant to get it out as often as it probably could have. Overall I enjoyed Dog Lover, but there were a number of hang ups that kept me from whole-heartedly endorsing it.