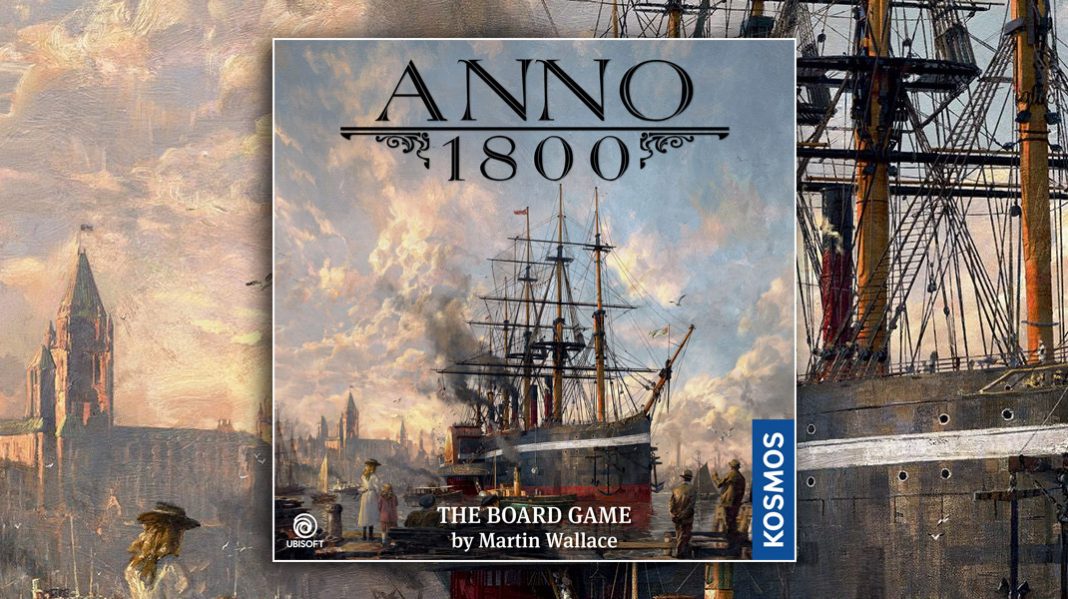 Tasked with developing a new community on this island is a difficult undertaking, especially since you initially have only a few residents at your disposal. Your goal to build a thriving community will require you to invest in new industry, build trade routes, provide for your growing population and build alliances with the old world. Efficiency and balance are key as you seek to gain the most influence over your opponents in this think-y, engine building, worker placement, resource-driven game.

Any true euro-gamer should know the name Martin Wallace. Adorned with a star-studded resume, Wallace is best known for Age of Steam, Rails of the World and both Brass: Lancashire and Brass: Birmingham. For those with the experience, Anno 1800 sits closer to Rails of the World in terms of difficulty than the brain-burning experience of the Brass series.

Based on the popular civ-building video game of the same name from Ubisoft, the game’s luscious artwork promises a big game full of depth and beauty, but does it deliver?

HOW THE GAME PLAYS

Each player receives their own private island ready to develop. Players also each receive a handful of workers represented by colored cubes, ready and able to get to work. In Anno, each worker is specialized in executing specific level tasks and can only be used for those benefits.

Spread across the center of the table is a sprawling selection of industry tiles ranging from simple, common products such as bread and liquor to more complex creations like tractors and ship turrets. While each player’s island comes equipped with the same predetermined tiles relating to farming and industries that produce basic building blocks such as steel and brick, players will use their workers to produce resources in an effort to grow their communities’ industrial abilities.

In addition to resource gathering, players will be attempting to satisfy the demands of the population represented by a series of cards corresponding to each worker’s cube. More basic workers will request things like soap and canned goods, but as your population grows and evolves, with greater abilities comes more extravagant wants.

So it’s a bit of an engine building adventure. I often found myself carefully planning my pursuits many turns in advance. In order to upgrade your population, certain resources are required, but those resources always seem to be 2 or 3 additional resources beyond your reach. I found it to be pretty satisfying every time I was able to achieve a new industry title that took me 4 or 5 turns to achieve.

The trade building aspect of the game provides players with a necessary means to expand your island as well as expanding your entire working strategy.

Docks and ships go hand-in-hand. Docks are only capable of producing ships with a limited benefit and upgrading those to a higher producing facility is necessary for efficiently managing your trades and expansion. There are 2 distinct types of ships each producing their own navel benefit.

The first ship resource is the ability to trade. These trade tokens can be used to acquire resources from opponents’ islands. Players cannot deny someone who wants to trade, but they do receive gold as payment in exchange. I quickly discovered finding a balance between your imports and exports was essential to both your efficiency and growth.

Ships also produce exploration tokens. Similar to the trade tokens, exploration tokens can be exhausted to achieve certain population card goals, but they primarily serve as a means to expand your island by exploring the old world (adding additional tile spots to your island) and the new world (giving you exclusive access to things such as tobacco, cotton and rubber).

In addition to the population cards, influence can be gained through a series of community objective cards as well as expedition cards which provide end game goals.

Most of the available industry cards on the gameboard come in pairs. This means in a 2-player game, you likely won’t have to wrestle over the availability of that industry tiles you so desperately need. You would think those tiles would become a more rare commodity in larger player counts… and you’d be right. But the flexibility in the game’s strategy helps mitigate this issue. With more players, more emphasis is placed on your ability to trade for those resources and creates a potentially different dynamic than in a 2 player game (not to undersell the need to trade in a 2-player game).

By my 3rd play of the game, decisions began to move pretty quickly. I found the game could be played in 90 minutes with 2 players. While the turns move fairly quickly, some of the think-y decisions are going to force the game to slow down at times and this will obviously be felt at higher player counts.

Ultimately, the heart of the game doesn’t change with the player count and I would recommend this at any of the game’s player combinations.

Anno 1800 is primarily made up of player boards, cardboard tokens and tiles, wooden cubes and deck of cards. The tiles and tokens are all solid and feel fine in your hands.

Setting up the primarily game board with the 120 industry/construction tiles is a chore though. The box doesn’t provide an insert, so I had to get a little creative in how I stored these tiles in a way that made setup easier for the next game.

The card decks are a little flimsy, but it’s not a major complaint – they got the job done. I do wish the player boards were a little sturdier – they just seemed a little too thin for my liking. Overall, the components are fine, they just didn’t wow me.

While the components didn’t wow me, the artwork definitely did in spots. The box cover is beautiful and a lot of the board backs feature pretty amazing artwork. I’m not sure how much of this was taken from the video game, but it’s new to me! The population cards definitely have more of a video game vibe. That being the case, the artwork of the people do look great though. I also felt the iconography throughout the game was really clear and strong. Some of the industry tile illustrations were a little small and fuzzy, but they were ok. Each player is also provided a game aid that helps identify everything in doubt.

Anno 1800 has been a bit of a roller coaster for me. I played my first game of Martin Wallace’s Brass: Birmingham only 4-5 months ago and I still wake up with sweats, reliving some of the game’s difficult decisions. How would Anno compare in weight to Brass?

For better or for worse, Anno is not nearly as heavy a game. This certainly sits in that sweet mid-weight euro spot for fans of the genre who don’t want to exhaust their ability to function. For me, this wasn’t necessarily a bad thing at all.

The first play of any new game is wrought with exploration and strategic wondering. From a visual sense, I had honestly expected a bigger game on the table. Anno is full of flat cardboard pieces and despite some nice artwork, didn’t get me that excited.

As I played through that first game, the decisions didn’t seem that interesting, and while the potential for fun was there – it seemed underwhelming. I really liked the idea of expanding your island as well as exploring the “new world”, but I didn’t take full advantage of it. Many of the industry tiles seemed out of reach and unnecessary for my short-sighted goals. As I mentioned earlier, after 4 or 5 turns, I wasn’t sure the game would ever end. I was obviously wrong, and as I wrapped up that first play, I began to see where I failed to utilize my workers and maximize more scores. I probably didn’t love it, but I was intrigued.

The second play found me quickly building my fleet of ships and boldly growing my population without the fear of a 4 or 5 hour game. I enjoyed the challenges of building larger docks and upgrading my population.

I also begin to see the fragile balance of upgrading your population too fast. Upgrading your workers too fast can leave certain industries without the necessary worker to efficiently produce the resources you still need. It was a tough lesson, but I really appreciated the challenge and looked forward to a more responsible approach. I also dabbled more in trading. Attempting to produce my own resources (primarily out of pride that first game) was just stupid. You obviously need to balance your exports or you end up spending all your gold and being left with no means to acquire those needed resources in a fair amount of time. In this sense, everyone is kind of working together, careful to only build out the absolutely necessary industries while leveraging your opponents achievements.

By the third play, I was chopping at the bit. I can’t remember a game that I initially felt so luke-warm on after 1 play and completely did a 360.

While it wasn’t initially evident to me, I really began to appreciate the game’s multiple paths to victory. I’m not sure how many games I can play before it begins to get a little tired, but right now, replayability sits pretty high. There did seem to be a hint of Feast of Odin in Anno and that is a very positive thing.

It took a bit to grow on me, but I really warmed up to Anno 1800. For me, the theme feels good: I love the old world construction and imagery. I also appreciate the diverse group of people and the silly things they ask for (kielbasa and fur coats, anyone?) They add a lot of fun and personality to the game.

The lack of a definitive set number of rounds was a little intimidating – especially after the initial shock of my rapidly growing workforce. It’s true – I did think the game would last forever, but now I appreciate the delicate balance between recklessly extending the game and efficiently managing your workers to optimize the game’s arch.

On the downside, Anno 1800 could be a little dry and serious for some tastes. The setup is also a bit of a bear, but for those willing to buy in – it won’t be an issue.

This is a think-y game that benefits those who relish careful planning and want just enough interaction to remind them other players are out there. In fact, effectively leveraging your opponents wealth can be hugely beneficial and central to your strategy.

There does seem to be a number of approaches you can take to the game and a lot of interesting industry paths to explore. The revolving objective cards help keep the game fresh as well. I really enjoyed the theme, mechanics and decision making in this one. This is definitely one I would endorse for someone looking for a medium-weight euro that provides an engaging theme and interesting challenges.