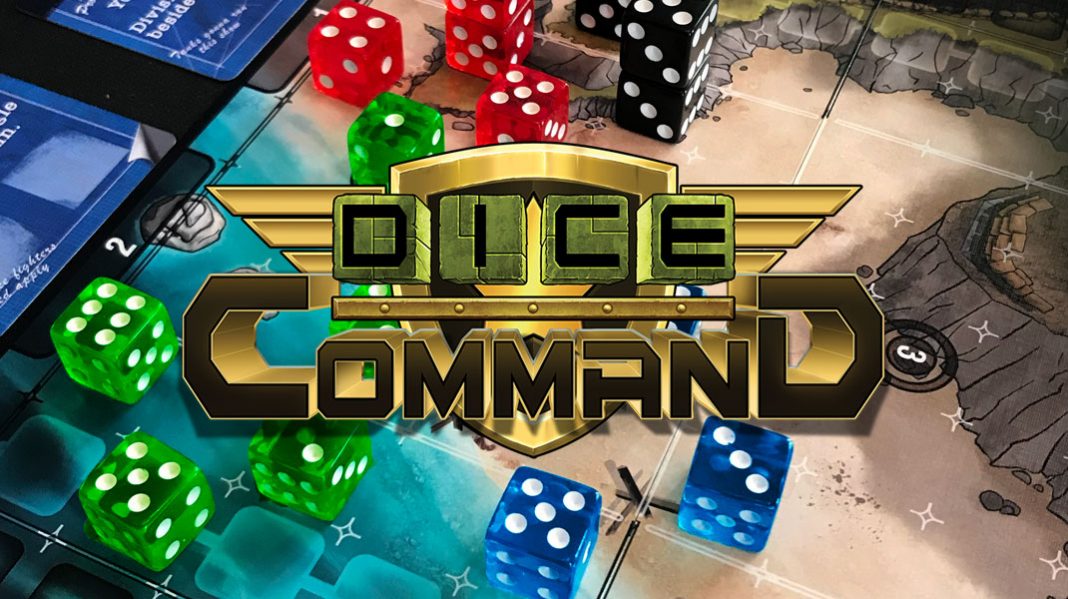 In this semi-abstract, war-themed, dice rolling/worker placement game, players take command of their own army, developing, deploying and attacking in an effort to breach the enemies front lines and win the war!

In Dice Command, players face-off across a gridded battlefield. You’ll take turns deploying and advancing your units (dice) across the board engaging your opponent with the winner being the first to place the necessary units behind the enemy’s front lines.

To begin, each player is given command of 5 units with the potential to grow their army to 10, fully-wiling and capable dice units.

Each players turn consists of 6 phases. During these phases players will roll dice to determine their military value, assign them to a series of Command Cards or facilities you control, resolve those actions through dice deployment, gaining credits or achieving research tokens. Finally players advance their their dice and engage the enemy.

The Command Cards allow a player a variety options each turn. The Conscription card allows you to purchase a limited number of troops for future use. The Financing card allows you to use an active troop to drum up some additional credits. The Research and Development card gains you research tokens that will allow you to upgrade your Command Card while the Headquarters card allows you to deploy new dice into the battlefield.

In Dice Command you can only deploy one dice of each value to the battlefield so you have to be both strategic and lucky put your best army forward. Lighter dice valued 1-3 are able to move 2 places while heavy dice (4-6) may only move 1 place.

Players also have access to additional Facility cards and Tactical Advantage Cards that provide different actions and benefits for your troops.

When a dice enters a square occupied by an opponent they have engaged in combat. Combat is simple: Players subtract their opponents dice value and the dice left standing is the winner. “Dead” dice are removed from the battlefield and must be purchased with credits by the player on another turn to bring them back into the game.

There are additional fun elements in the game like armored units (where you stack two dice on top of each other), placing mines and developing nuclear weapons to wipe out your opponent.

Players take turns resolving their phases until a player breaches the enemy lines with the winning number of troops.

I had the opportunity to play a prototype of the game, but the artwork is really well done and sets you right in middle of the theme. It seems as if Ejected Planet took the time to make sure the graphic design was both visually pleasing and effective with its communication/instruction. I can’t wait to see the final product.

I’m a huge fan of dice rolling games – especially dice rolling games that allow for plenty of strategy. Dice Command definitely delivers on both of these fronts. While you can’t always control the way the dice play out – you’re given plenty of options throughout the game to put yourself in position to at least have a fighting chance.

Commanding a facility on the board or drawing the right Tactical Advantage Card can often provide you the help you need to turn the tide.

There was one game in particular where I fell behind early – so much so my opponent was already waving to the crown and kissing babies. I was sure I was sunk, but a few lucky rolls and timely moves gave me a boost and I ended up coming from behind for the win. It was a thrilling victory!

Another great benefit of the game is its easy setup and quick playtime. Once we had a handle on the game we were able to get a game in under 30 minutes. This is a huge positive for the amount of strategy in this game.

If you love dice games and you love war games, Dice Command should be a no brainer. It looks great, it’s easy to pickup and it’s fun to play.

You can back Dice Command on Kickstarter at https://www.kickstarter.com/projects/ejectedplanet/dice-command