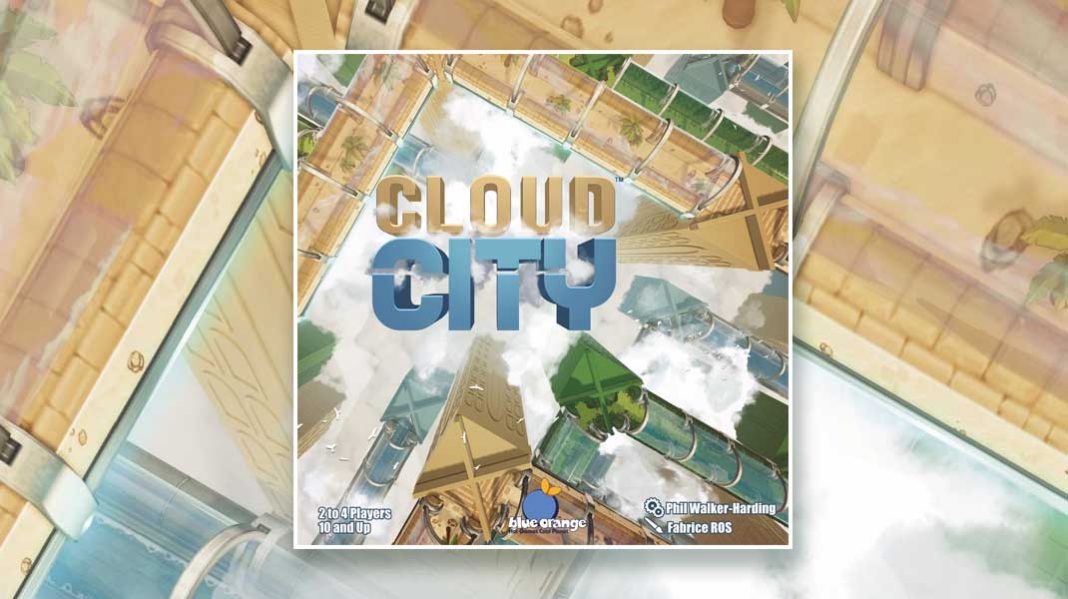 Cloud City is holding a competition for the best architects to help design the city of the future: buildings so high they reach beyond the clouds. Compete against your opponents by modeling the city, connecting the buildings through sky bridges and earning the most votes from the city council.

Designed by Phil Walker-Harding (Sushi Go, Barenpark and Silver and Gold), Cloud City puts you in the architect chair. You’ll take turns drafting tiles and placing 3-D buildings. Earn city council votes by connecting buildings with walkways. The longer the bridge, the more votes. The player with the most votes at the end of the game is the winner.

One appealing aspect of Cloud City is that it’s so highly accessible. Everything from setup to the gameplay comes together quickly.

Over a series of 8 turns, players will take turns drafting cloud tiles, playing tiles in their personal city plan and attaching bridges. Each turn consists of 4 simple actions:

1) Expand the base of your city

Players are given a hand of 3 cloud tiles. During the “Expand the base of your city” phase players place a tile from their hand into their personal city plan. Tiles must always be connected to another tile by at least one side and cannot expand beyond 3 consecutive tiles (your final city design must be 3×3 square).

If the building model sits unobstructed from another building of the same height you have the option to build a walkway. There are a few limitations such as not placing a walkway diagonal, not attaching more than 2 walkways to one building or running a walkway across an empty area where a tile hasn’t been placed yet. Walkways can cross paths at different levels which is why it’s critical to build building models at different sizes. Remember, it’s not the height of the buildings that score votes, but the length and number of walkways.

Play continues for 8 rounds (until each player has finished their design plan). Votes are recorded and a winner is declared.

The components are all pretty good. The 3-D buildings are high quality plastic and fun to play with. The cloud tiles and walkways are all made from heavy duty cardboard and seem durable enough.

This is really a game about functionality vs presentation, but the art direction is good in it’s limited amount.

For an incredibly simple game, Cloud City is thoroughly engaging. You only have so many options with each turn, but the puzzle revealed behind each action is interesting and at times challenging. This is the kind of game that works for kids and adults alike because it’s so easy to teach and play but sill provides a unique personal experience each game.

Working in the 3-D space challenges you to think beyond the next tiles. Thinking ahead to not only connecting one set of buildings with a walkway, but multiple sets at the exact same time can really stretch the brain muscle. Mental gymnastics aren’t required as this could be a casual gaming experience. But, if you’re willing to bring your A-game, you might find Cloud City even more rewarding. Working in 3 levels over 9 tiles will force you to think 3-dimensionally and at many times make decisions on the fly due to opponents snatching up the limited community tile options. Somehow, despite the potential mental complexity, it never fails to be accessible and inviting.

As the game continues your tile options become fewer and fewer forcing you to sacrifice good plans for… well, other plans. There are also a limited number of walkways available in the game. If you wait too long or your design doesn’t come together quickly enough, you may not be able to grab the right walkway length – again sacrificing points.

The only downside is how fiddly the game can be. Buildings can slide along the cloud tiles causing some trouble when placing walkways. Sometimes placing a bridge across a lower level building after a higher level walkway has been played can be difficult for larger fingers. In extreme cases you may even need to deconstruct a small portion of your city plan to add in certain walkways. The smaller walkways can be a little hard to grasp as well. I feel a lot of these issues would have been solved by adding an additional die-cut layer to the cloud tiles, creating a space to hold the city buildings in place. I imagine the creators passed on that to keep costs down since there are a ton of plastic buildings in the box. All that said, the fiddly-ness of the game wasn’t nearly as bad as I feared and would definitely consider it acceptable.

Cloud City is a unique puzzle game that’s super accessible and great for the entire family. The game pieces are fun to manipulate and your end design, despite its level of success, is always satisfying and impressive. It makes you want to holler “Look what I built!” The simple game flow mechanics allow you to focus on the more engaging city design portion – which is exactly where it should be. Cloud City is so close to being an instant classic – I imagine it’s one I’ll be playing regularly years from now.