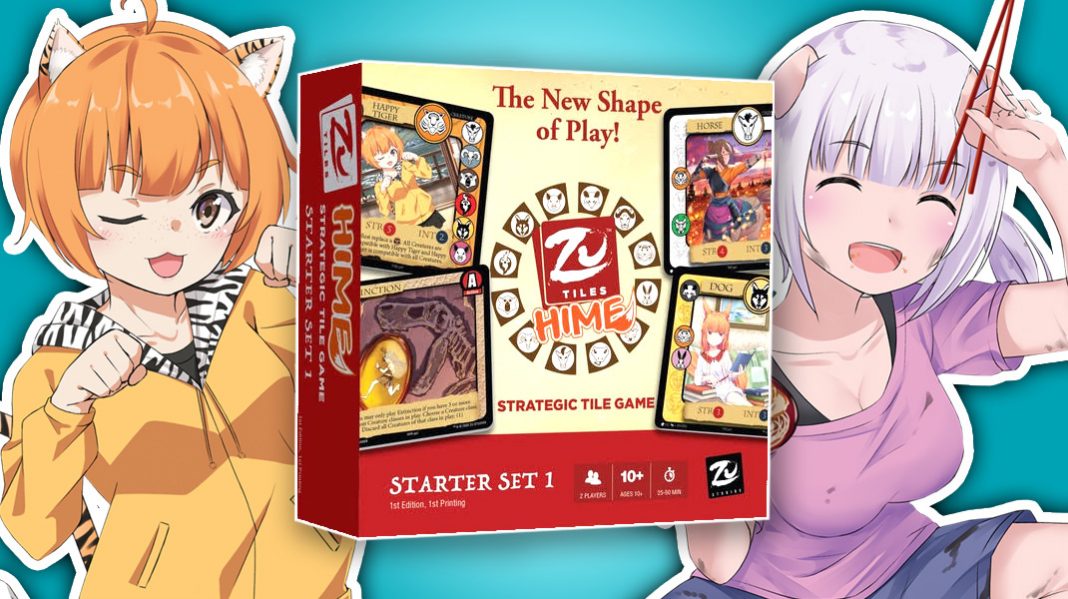 ZU Tiles: Hime is a strategic tile placement game based loosely on the creatures and compatibilities referenced in the Chinese Zodiac. In the game players place creature tiles in the playing area with the goal of trying to complete a 2X2 square of creature tiles where all creatures in the 2X2 square are compatible with their orthogonal neighbors. Once a “compatible square” is completed (which can consist of creatures controlled by either player), all tiles in the square are removed from the playing area by the player who completed the square. 1 point is scored for each tile removed. So, for a 2X2 square, that would mean 4 tiles would be removed and the player responsible for completing the square would score 4 points. The first player to 12 points wins!

With ZU Tiles: Hime the gameplay is much more centered around strategy and tile placement than it is about combat. Although there is a combat element if a player wants to go that route in an effort to try to score points. This aspect of the game may be appealing to parents and others who are more interested in maybe teaching or playing a strategy game than they are interested in a game focused on combat or battle.

The theme is meant to be lighthearted and fun (people have been known to actually laugh out loud). The creatures all have interesting and fun Action tiles they can use to manipulate the tiles in the playing area. For example, Rabbit has a tile called ‘Rabbit Leap’ that allows it to jump over tiles. And Ram has a tile called ‘Push’ that allows it to move and push other tiles along with it as it moves.

As far as how gameplay works, each player starts with a deck of 40 tiles. Those tiles are randomized and are placed in 5 stacks of 8 tiles each in front of each player. Each player draws 5 tiles from any stack in front of them and the game is ready to start. The youngest player goes first and on their turn they can do any or all of the following 5 actions in any order.

Then when a player is finished with their turn, they draw 1 tile from any stack in front of them. If a player ends their turn without doing any actions, they have the option of drawing an additional tile. Then it is the next players turn. Play proceeds in this manner until either player scores 12 points and wins the game. Or, if a player needs to draw a tile, but they cannot do so because they are out of tiles, they would immediately lose the game.

Zu Tiles: Hime is a game that has been in development off and on for about 16 years. The game was initially conceived in late 2003 by Josh Bakken with a very rough and early version being completed by Bakken in mid 2004. The game was more or less shelved until 2018 when the dust was blown off and work was done by Bakken to overhaul, improve, and clean up the earlier rules and mechanics. A complete new set of art was also commissioned for the game from 2019-2020.

The inspiration for the game came as a result of various different influences and experiences. Bakken was a champion trading card game player of multiple different card games in the mid-90s. Those experiences helped him develop his ideas around the Action Stack mechanic used in the game. The ideas around the compatible square mechanic came as a combined result of conversations about the Chinese Zodiac and his experiences with a game prototype where players drew glass beads out of a bag.

As to who the game appeals to, well in my mind it’s really two types of people: 1) Strategic minded children and the parents/caregivers who want to encourage and have a bit of fun supporting that in a child. And 2) Adults who are extremely or ‘hyper’ competitive with other hyper competitive adults. Now I wouldn’t ever want those two groups to actually play with each other, but when I think about who I think will enjoy the game the most, I do think those two groups would both really have a lot of fun with ZU Tiles: Hime.