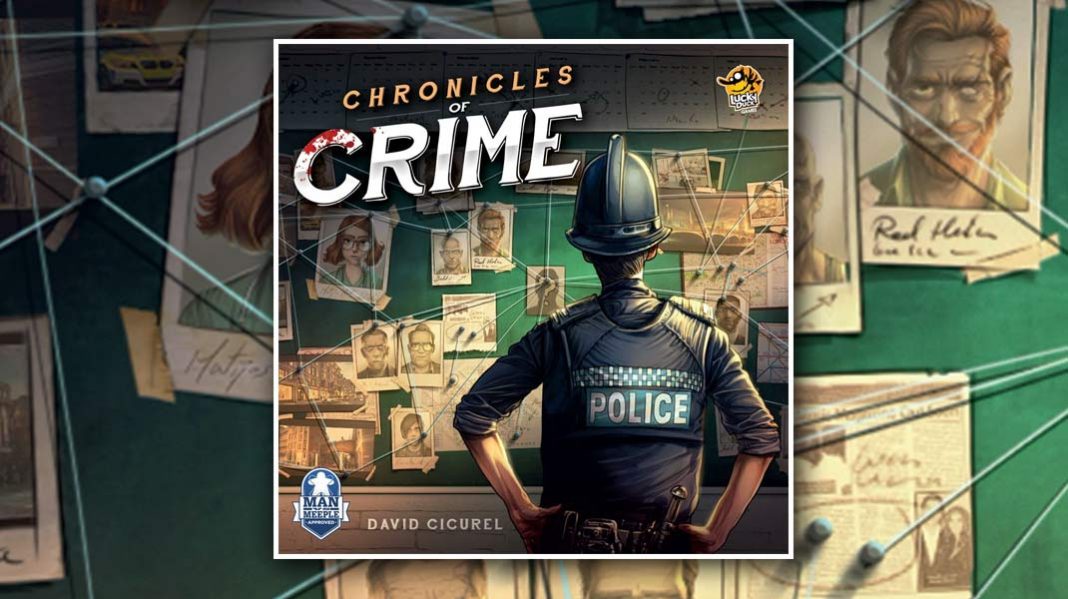 “Criminals should be punished, not fed pastries.” ― Lemony Snicket, The Blank Book

In the foggy streets of London, life goes on as normal. But there is an underbelly of crime and murder lurking in the shadows often rearing its ugly head. As a detective, it’s now the responsibility of you and your team of forensic experts to tackle these crimes in an effort to keep the streets safe for the regular people.

In this cooperative game, you’re taking on the role of a detective launched into a series of crimes. You’ll analyze crime scenes, work with your group of forensic experts to prove evidence, discover motives and question victims and villains in hope of solving the case before time runs out. Chronicles of Crime offers a number of engaging, story-driven scenarios that can be played in a group or solo. The game is played alongside an interactive app that allows you to evaluate crime scenes and navigate your way to meet suspects and evaluate evidence through a series of QR codes.

Each game starts with a blank game board and 5 common locations/people (Scotland Yard, Criminologist, Scientist, Computer Hacker and Doctor) you can visit for support throughout the game. The game also comes with a series of locations, character cards and evidence category & special item cards. As you play through each individual scenario you’ll be asked to reveal locations, characters and evidence.

Players are given the opportunity to do 4 actions throughout the game: Scan a Location board, Scan a Character card, Scan an Evidence Category card or Scan a Forensic Contact. Each scenario requires a limited amount of time to solve the case and each action in the game constitutes a certain amount of time. It costs 5 minutes to interrogate a character and 20 minutes to travel to a new location. In certain scenarios you may only have a limited amount of time to engage someone or only be able to question someone at a specific time of day. Ultimately, the quicker you solve the case, the higher score you accrue.

Each case begins with the opportunity to view the crime scene and interview characters who may have useful information. Using the app, you’ll be able to look at the crime scene in a 360 degree environment, absorbing the aftermath of the crime and combing the space for clues. Once a clue or piece of evidence is discovered you’ll be promoted to place that card on your game board.

As you work your way through the case you’ll need to ask characters about certain pieces of evidence or victims. Playing cooperatively, you’ll be able to consider the clues and the characters as a group. The game provides opportunities for each player to be involved such as limiting the viewing of the crime scene before you’ll have to pass your viewing device onto the next detective.

Each scenario can be played independently providing it’s own storyline and characters.

While there are limited components in the game, the board, location, character and evidence cards are all good quality. The artwork is cartoony, but in a grown-up sort of way with a bit of edge and danger. It’s accessible, but still effectively engages the theme. The gritty, dangerous characters ooze trouble while everyone seems to have a little something to hide.

I am not a fan of app driven games. I love board games because of the tangible nature. After a long day of work, all I want to do is avoid starting a screen. But I am a huge fan of crime stories. I’d heard so many good things about Chronicles of Crime, I decided to throw caution to the wind and take the dive. I’d be lying if I didn’t say the app creates a bit of a barrier for me, but it wasn’t nearly as bad as I thought it would be. The app is incredibly easy to use and the QR code system works seamlessly with your phone as you interact along with the game.

This is a game that wants to tell engaging stories of crime and passion, introducing seedy characters and challenging your perceptions. I’d say that it succeeded for the most part. The writing is solid and the twists and turns in each case forces you to stay on your toes. I felt pretty engaged with the characters – wanting justice for victims and bars for the criminal suspects.

In a game like this it’s easy to throw out accusations and bold assumptions, but you’ll have to work the case to find the correct resolution and gain the most points. Evidence is critical and applying it is king. There were a number of times I found myself in challenging situations – racking my brain to determine my next move. I often needed to make extra trips around the case locations, re-interviewing people and wasting precious case time.

The game suggests a player count up to 4 players, but I can’t imagine playing this with over 2. Sharing the crime scene and discussing the characters and evidence with 4 players will really bog down the flow of the game. While you do play at your own pace, a game like this, in my opinion, is best suited to play solo.

Overall, I enjoyed the atmosphere and challenge presented with Chronicles of Crime. The dark storylines definitely clearly cater to an adult audience but also place a little extra urgency when attempting to solve a case. While I don’t love the app aspect, it certainly didn’t bother me and I wouldn’t hesitate to play future scenarios. The base game does have a very limited number of scenarios, but there are already a number of expansions as well as downloadable content to keep you engaged for a long time. With the following this game has gained, I imagine they’ll be producing new material for some time. The cases were challenging and I found myself playing some over again to grab a better score and reveal a story that I missed the first time around. If you’re a fan of true crime or crime novels, I highly recommend you take a look at Chronicles of Crime.