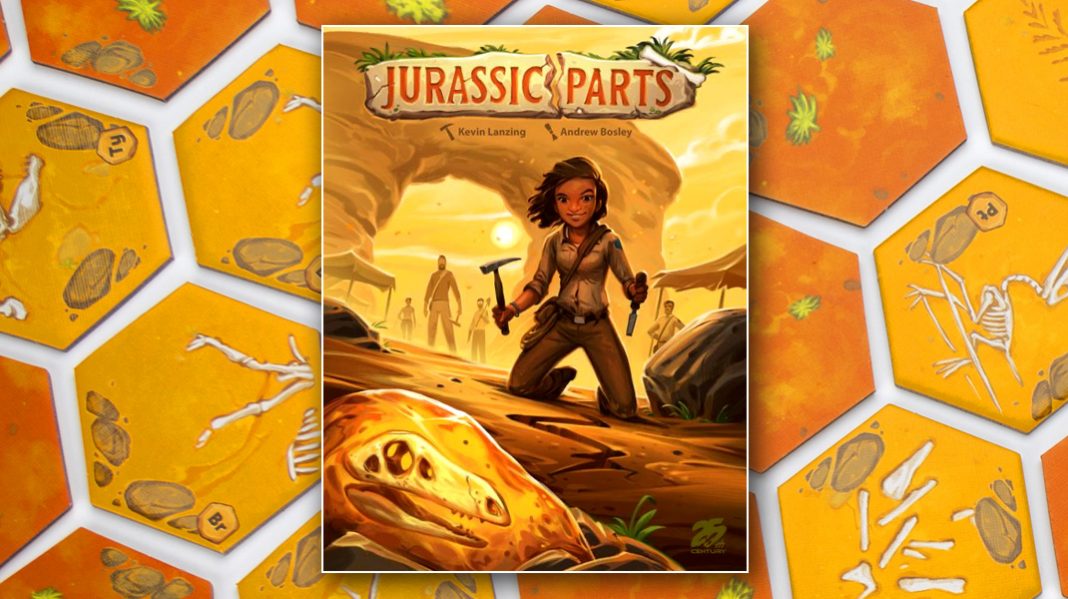 A new dig site has been discovered promising a number of complete dinosaur skeletons. Sharpen your picks and compete against fellow paleontologists for scientific glory as you race to unearth the most fossils in this family friendly game.

Jurassic Parts is a set collection, area management game where you’re working to gather dinosaur bones. Each player is equip with a limited number of chisels that they’ll strategically use each round to break up the rock where the bones are buried. You may also trade unwanted bones to the field leader to gain amber which you can turn into additional fossils and receive bonuses to help you on your mission.

To start, players each chooses a character and gathers 12 chisels. The 58 fossil tiles (half turned upside down) are randomly arranged in a hexagonal-ish grid making up the dig site slab. Each player is given a field guild to help them identify each dinosaur and see which bone collections gain the most points.

Over the course of a series of actions players will take turns working to break the slab apart and claiming bones.

Each turn, players will be given 3 sharp chisels to work with. Players play the chisels by placing them between the hexagon fossil tiles. This is considered a “break” and using enough chisels from one edge of the slab to another will “break off” that chunk of slab. Players then claim a portion of the slab (number of fossil tiles) based on how many chisels they contributed to the break. Players will be able to identify certain bones since half the fossils tiles are visible, but the face down tiles are a mystery. Tiles with rocks on the edges are harder to break and require 1 or 2 additional chisels to break apart. For a shared break of 3 more more players, the player who contributed the most chisels receives half the tiles, with next highest contributor getting half the remaining and so on. Any leftover is given to the Field Leader.

Once the slab has been completely dismantled, players add up the score from their collected fossils. The game also features “Pile of Bones” tiles that act as a wild card to help complete dinosaurs. Players will score between 1 and 15 points per dinosaur depending on their site. Players can also collect plant fossils and score points based on how many they’re able to gather. The player with the highest point total at the end is the winner.

Jurassic Parts has some pretty nice components. The fossil tiles are solid cardboard and should last. The pieces of amber are like chunks of orange glass and they’re super fun to collect and hold in your hands. The individual player mats could be a little higher quality paper, but they get the job done. The chisels themselves are a little difficult to manage in your hands but it’s not the end of the world. The first player marker is straight out of Jurassic Park – featuring a mosquito encased in a piece of amber – incredibly cool.

The artwork done by Andrew Bosley is fantastic. He is definitely one of my favorite artists having done work on games like Everdell and Tapestry and he never disappoints. The art really sets the tone for the game. The character illustrations are fun and engaging. The box art, rulebook and tiles are all top notch.

Jurassic Parts was a bit of a surprise for me. I was expecting a casual experience with a fun theme. While it’s not an overly complicated game the thought put into each turns decisions give the game a much more challenging feel. Your opponents decisions also have lingering effects on your approach and strategy. Since everyone has the opportunity to join in, chipping away at a slab you’ve been working on at any time – you may end up being forced to share your spoils. While this can be frustrating, you’ll be able to get your revenge sooner than later when you return the favor.

There is a bit of luck in the game as you pursue specific dinosaur types. The face down tiles create a sense of mystery and excitement and I found myself often choosing a mystery tile vs a sure thing in hopes of something great.

The chisels were a bit of dexterity challenge, but making sure you setup your fossils tiles with plenty of space between helped solve that issue for the most part. My only other negative involves setup. It can take a decent amount of time to setup all 58 fossil tiles. I highly recommend group participation when it comes to setup and teardown.

Jurassic Parts in the end is a fun, family game with some interesting decisions to go along with its bright, adventurous theme. While the strategy may be a little over the head of younger kids, the game mechanics and decision making isn’t super complicated. For the spatially challenged, It’s a small box game and that should appeal to anyone with crowded shelves and cabinets. Overall, It’s a good gateway game for older kids who love the theme and it’s full of surprising decisions and challenges for the older crowd.