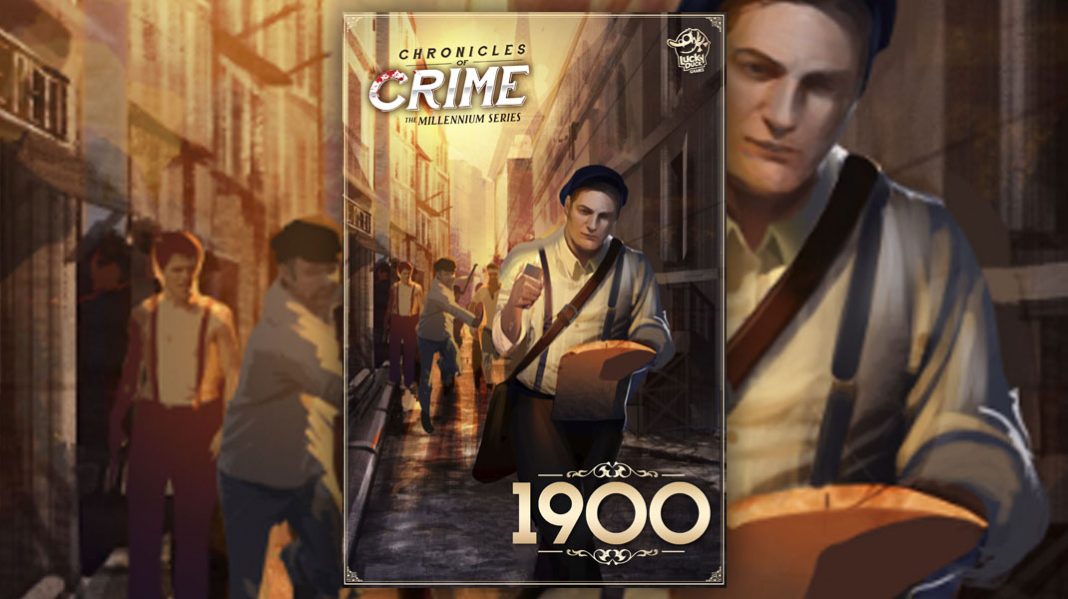 It’s the turn of the 19th Century and you are Victor Lavel, a hungry journalist working for the Les Nouvelles de Paris newspaper. Coming from a family known for its crime solving, your attention is drawn to the underbelly of society. It doesn’t hurt that the police commissioner is your uncle. Throughout the game you’ll take part in a series of crime solving leads as you utilize your deduction skills to efficiently analyze the evidence and root out the reasons and perpetrators behind the cases… all before your next deadline!

The original Chronicles of Crime is ripe with physical and digital expansions to further your pursuit of justice, but you’ve always been required to have a copy of the base game. The cool thing about 1900 is that it’s a completely stand alone game.

I’ll do my best with this review to avoid spoilers much like the newly added Puzzle cards. A new feature in the Chronicles world, these mysteries coincide with elements or evidence unique to the case and add a fun, additional layer to an already challenging game.

Common characters throughout the journey are Charlotte, a fellow newspaper employee who will assist you as you research new cases and your uncle – giving you a jump on crimes happening as they unfold.

Throughout the game you’ll examine 3-D crime scene environments, scouring the scene for evidence and then analyze the evidence in light of the locations and paticipants. Each action you take throughout the case constitutes time. The more time needed to solve a case, the lower your final score.

You’ll also have the opportunity to interview characters. You’ll use the evidence, locations and other characters in reference when asking questions. Again, time spent with each character, while necessary for success, works against your final score.

Chronicles of Crime 1900 is basically an app-integrated card game, so the components are minimal. The cards and location boards have a nice soft feel to them, but they’re not over the top. The Evidence Board isn’t near the quality of the original game, but those seem like calculated choices to keep the game’s price down and thus more inviting to new players. That’s not to say the value isn’t there. The app is incredibly easy to navigate and well thought out.

The game’s artwork does a great job of immersing you in the era and is certainly a highlight. In line with the previous Chronicles of Crime titles, 1900 features amazing location images and character portraits. These all have a realistic style adding to the weight and tension of the game. Each crime scene location is equally well done with tons of detail. Additionally, the graphic design on the cards does a fine job illuminating the time period. If Chronicles of Crime 1900 doesn’t work for you it’s certainly not because of the art – it’s beautiful.

I absolutely love the concept of the Millennium Series. The stories, while all loosely tied together, take a bit of a different approach to the game. I love the idea of solving crimes without modern technology so historically-themed, crime-solving detective stories really hit the spot. Another great feature in 1900 is the art. The character and location artwork really bring the environment to life. The characters themselves are pretty interesting and—always a staple in any Chronicles game—the cases are very challenging.

This is definitely a game where you can’t check out mentally. It’s also not just about asking the right questions and discovering the evidence to crack the case… it’s about doing it efficiently. That tension rings throughout each case. While miscues aren’t the end of the world, sometimes they feel like it.

I also really appreciate the Puzzle card additions. This is a small add, but it gives the game added life and interaction. I don’t want to spoil anything, but suffice it to say these puzzles are directly tied into the storyline and provide an additional type of problem solving to make the game more robust.

1900 is for 1-4 players, but I couldn’t see this working with 3 or 4 unless you were able to cast the app to your television. Passing a tablet or phone really bogs down the game. For my money, Chronicles is best played as a solo game. While you don’t have a companion to bounce hunches and ideas off of – the game flows much smoother and quicker.

The final elephant for me is addressing the idea of an app-integrated game. I’ve been vocal in the past how a lot of my love for board games comes from being able to unplug from my computer or television. I originally got into games because it provided a better opportunity for family time versus sitting around the tv screen. That being said, Chronicles of Crime does a great job integrating the app and using it in the best way possible. It’s not difficult to use and definitely enhances the experience. Take that for what you will, but I don’t mind tying in an app as much on a game with this high of production quality and ease of use.

Overall, I really enjoyed this latest incarnation of Chronicles of Crime. 1900 puts you right in the middle of the era and each case is truly engaging. Again, the cases are difficult – so don’t expect to zip through the game. Thinking through the case and trying to ask the right questions to the right characters will eventually pay off, but it’s never quite so cut and dry. The themes may be a little intense for younger players, but this is a crowd pleaser that’s affordable. All-in-all it’s a great addition to the Chronicles franchise. It’s a great value and it’s going to provide a good dose of quality entertainment.