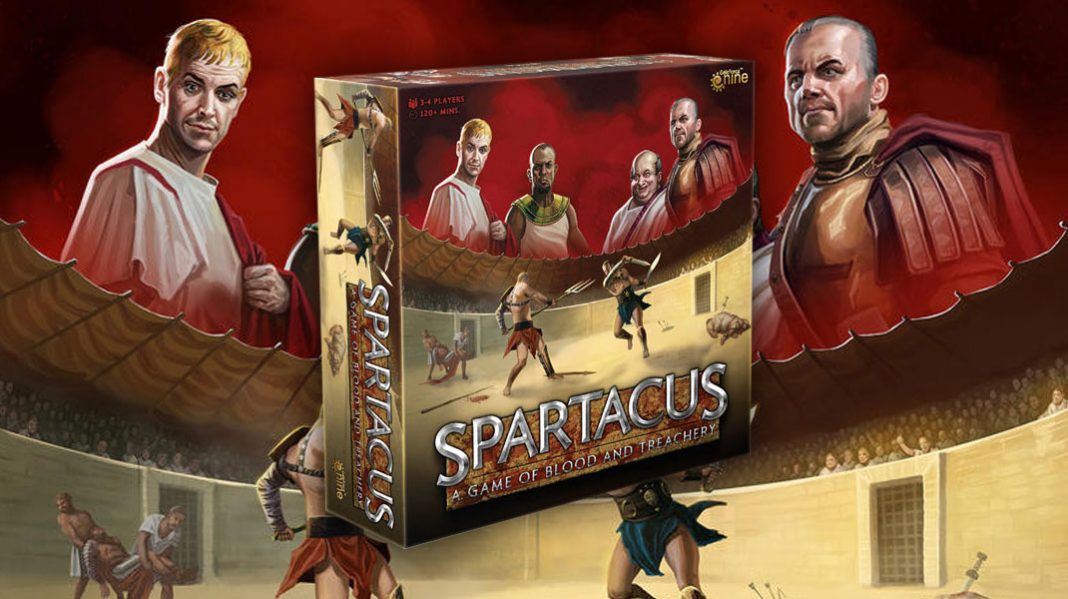 The city of Capua was one the largest, wealthiest and important cities in the ancient Roman world. Home to powerful gladiatorial schools, Capua gave rise to Spartacus and other famous fighters around 73 B.C. In Spartacus: A Game of Blood and Treachery, you take on the role of a Dominus, or head of a house competing for influence. You’ll scheme and attempt to sway the activities of the day to build the greatest gladiatorial school – earning power and glory in the sands of the arena.

In Spartacus: A Game of Blood and Treachery, you’ll choose one of 4 distinct houses each offering their own unique strengths. You’ll scheme, barter and build your house, negotiate for the best gladiators and ultimately gamble and battle your way in the arena.

Spartacus: A Game of Blood and Treachery was originally developed in board game form to mirror the Starz television series of the same name. In this new edition of the game, new artwork has been added to better differentiate itself from a show no longer on the air, but the bulk of the game has remained the same. I never had the opportunity to play the original version of the game, so my experience here is completely fresh.

The majority of the gameplay can be narrowed down to 3 individual phases: The Intrigue Phase, Market Phase and Arena Phase. During these 3 phases you’ll essentially execute schemes to build up your own house while simultaneously messing with your opponents, buy, sell and trade assets (guards, gladiators & slaves) and gamble and battle in the arena.

The game features 3 Game Types that work to accommodate the right game length for you. The difference between these Game Types are how much Influence you start with. Gaining Influence if the primary goal of the game with the winner being the first to achieve 12 Influence.

These offensive Scheme card attacks can be countered with Reaction cards limiting or defusing the effect entirely. Players also might possess Guard cards that allow you an opportunity to completely deflect a targeted Scheme card by rolling a die. Guard cards are blindly drawn during the Intrigue Phase and provide defense to your house.

Once all the players have either exhausted their attempts to gain goods and/or cause trouble for their fellow player or chosen to pass, the Intrigue Phase comes to an end and the Market Phase commences.

The Market Phase can be broken down into 3 mini-actions. The first being the Open Market. During this time players can freely buy, sell and trade any of their  resources. There is no limit to how this can go down. Each card also features a monetary value and players can also sell these cards to the bank during this time.

This is followed by the great Spartacus auction. During the auction, 3 Market Cards are drawn face down and revealed one at a time. After each card is revealed, the players make a blind bid on the card. These Market Cards are made up of Gladiators, Slaves and Weapons.

Gladiator cards each feature unique gladiators equipped with a distinct variety of Attack, Defense and Speed values each used during the Arena Phase.

Slave cards provide income after a round is complete helping build wealth and fund your active gladiators.

Weapon cards can be used to upgrade your gladiator prior to combat.

Once all 3 Market Cards have been bid on, players are faced with one additional bid: the Bid for Hosting. The winner of this blind bid will be given control of the Arena Phase and will earn an additional Influence point.

Entering the Arena Phase, the winning bid for hosting will issue invitations of their choosing to players (including themselves) to enter into combat in the arena. Players do have the option to refuse, but refusing to participate costs 1 Influence.

Once players are selected, they choose one of their gladiators (or slaves) to represent their Dominus in the arena. At this point all players have the opportunity to bet on a series of potential outcomes for the fight. This is another opportunity for players to beef up their wealth and gain an advantage over their opponents in the coming rounds.

The player hosting the battle has the power of life & death. They have the final say in whether a defeated fighter lives or dies. Surviving fighters return to their Dominus. Dead fighters go back to the soil and sand of the arena.

After the battle and round are complete, all players take part in Upkeep where they earn coins for slaves, pay coins for gladiators, refresh exhausted asset cards (certain cards provide benefits for “exhausting them”) and heal injuries. Players roll dice to heal injured gladiators or slaves (if they were drawn into combat).

There is obviously a lot going on in this game and I didn’t cover everything. But this process of Intrigue-Market-Arena Phases repeats until a player is ultimately crowned the victor with 12 Influence.

Spartacus features a number player and game boards, 2 decks of cards, cardboard coins, tokens, a number of dice and 4 gladiator miniatures. Overall, the components are satisfactory. The cardboard used on the boards, tokens and coins gets the job done. The cards are a fairly standard stock, but don’t feel cheap. The dice are colorful, but fairly standard. The miniatures are a bit undersized, but have solid sculpts with plenty of detail for the size. The game box could be a little thicker, but the insert works well to hold all the pieces. Nothing here really stands out here, but it also doesn’t detract from the game.

Overall, the artwork appears fairly similar to the previously incarnation of the game. Where they seem to have made the most improvements are in the graphic design and visual communication of the player boards. The images of the show’s actors have been replaced with original illustrations. The artwork overall is fine with some pieces standing out more than others. Perhaps a little more detail and time could have been put into certain pieces, but overall it does a good job of immersing you in the theme of the game.

If you’re looking to purchase Spartacus: A Game of Blood and Treachery, the first thing you need to consider is the theme. Are you a fan of Ancient Rome and the romanticized idea of gladiators and battling for glory. How you feel about the theme will go a long way in your enjoyment of the game.

In a strange way, this Roman culture mirrors a lot of our society today. Our prosperity provides extra leisure time allowing us to enjoy things like concerts and sporting events. As peace endures we lose sight of the efforts that got us to this point and we are more likely to engage in brutal activities that appease our morbid pleasures. Enter the battle in the arena… warriors scraping with everything on the line all for the pleasure and bloodlust of the crowd.

Spartacus: A Game of Blood and Treachery plays out like a series of mini-games. Each phase of the game features its own unique competitive twist. While they don’t always come together for the better benefit of the whole, they are all fun and interesting in their own right.

The backstabbing and building of the Intrigue phase plays out like a group of friends sitting together telling jokes… and every once and awhile getting into a fight. Spartacus encourages an environment of social engagement emphasizing negotiation and leverage during this phase. Where you take it is up to you.

The Market Phase is a battle of wits and wagers. Spinning deals and betting at the right time can turn the gladiatorial odds in your favor. Spending your cash efficiently will ultimately lead to a more effective Dominus. It’s also good not to underestimate the value of winning the ability to host the Arena Phase. This mini-victory guarantees an additional Influence with the opportunity to dictate the terms in which the combat will unfold. Having the power to determine the combatants AND the survival of the defeated gladiator can simultaneously serve you both offensively and defensively.

Finally, the rolling and gambling of the Arena Phase allows you to weigh odds, test your luck and tactfully engage in a battle mano a mano.

Unfortunately, the pinnacle of the game can come across as a bit of let down. The race to the finish line loses some of its steam when the outcome is resolved prior to the Arena Phase during the last round. This isn’t a deal breaker, I just personally wanted to see the entire game resolved in a bloody duel in the area vs a forlorn conclusion during a betting or Intrigue phase.

Spartacus: A Game of Blood and Treachery is ultimately a rowdy good time of negotiation and insults. Spartacus shines with a crowd and the player count of 3-4 further embraces that. While a game with only 3-4 players can be limiting for a lot of players, any less and the game isn’t really playable… anymore and the game goes on well beyond the length it should. I wouldn’t recommend Spartacus for players looking for a more refined, think-y type play although there is plenty of strategy and planning involved. Spartacus is for players looking for a wild game where you push your luck and attempt to cause trouble. It is a longer game, but the different game lengths in setup can help tailor the game to your desired time length. Play does change slightly based on the predetermined length, but the heart of the game is still intact. If the theme intrigues you and you have 2 or 3 friends willing to hangout and cause trouble for a few hours – Spartacus: A Game of Blood and Sand could be a great fit.