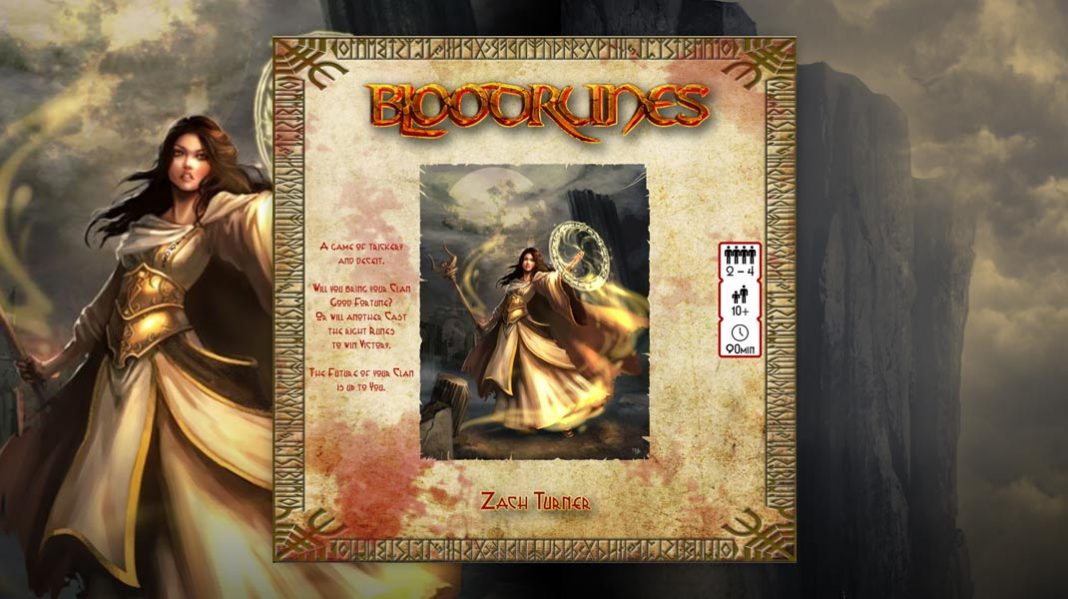 By 846 A.D., the exploits of legendary viking, Ragnar Lodbrok had become world renowned. Upon his death, a feud broke out between the nordic clans as to who would take over the vacancy in leadership. The worthy heir is up to you as you take on the role of rune casters from competing clans. With the help of acolytes, each caster carries the spells to determine the fortune and future of their clan.

BloodRunes is a competitive, card-playing, puzzle game where players attempt to build patterns in an effort to achieve spell cards. Players will need to balance their hand by conjuring both offense and defensive spells if they hope to gain the necessary blood fortunes that will lead your clan to dominance. Are you worthy to take the mantle of kinship among the clans or is this a journey best left uncharted? Let’s take a look at Bloodrunes…

During a turn, players will work to manipulate the game’s central casting board to achieve personal objectives through a variety of actions. These objectives typically occur in the form of spell cards that can be achieved by playing runes on the central casting board to match specific patterns. This seems simple enough, but there are plenty of challenges you’ll face along the way including limited actions, rune needs and intrusive opponents.

Players begin the game with a handful of rune cards and a single spell card. Each player starts with 3 actions represented by acolytes on their personal board. These actions allow players to draw additional runes and spell cards from a central market. As the game progresses, more acolytes can be gained earning additional actions each turn.

In addition to drawing available runes and spell cards, actions you can choose on a turn are selecting or refreshing the rune and spell card market, playing a rune in one of the 5 spaces on the central board or playing an achieved spell card.

The spell cards are where you’re going to do the most damage. Each spell card requires a specific pattern to activate. This pattern will be 2 to 5 specific rune symbols. The catch is each pattern has a top, bottom, left and right and must be oriented in relation to which side of the board the player is sitting in that game. This means the board will look completely different to each competing player.

Spell cards can be both offense and defensive focused. Spell cards may allow you to steal both opponent acolytes and blood runes—protection cards (or ward cards) can be spun to protect you from individual players or the table as a whole. The more powerful the spell, the more challenging the pattern is to achieve. Players might also have a hex card that discards or steals another player’s active ward card.

The goal of the game is to gain 6 blood fortune. These can be gained by achieving certain spell cards or flat out stealing them from your opponents. It can get pretty nasty,  so you really have to read your opponents and determine what level of defense you need to partner with your offensive game to both protect your resources and pursue additional goals.

While achieving a spell card pattern directly relates to where you’re sitting at the table, many of the spell card actions defend or attack players at specific seats at the table as well. Careful planning and timing are critical to making the most of your hand.

While there is a decent amount of strategic depth to BloodRunes, the learning curve isn’t steep and can be picked up quickly. The rules, cards and concepts of the game are fairly intuitive making the entire game very accessible. I was able to successfully teach both my 7 and 9 year old kids in about 10 minutes. There were a few questions throughout, but nothing (apart from their own indecisiveness) that really bogged down the flow of the game.

My review copy was a prototype and I’m assured there are still some things in flux. The final edition will contain a neoprene mat in place of the central casting board. Much of the artwork is temporary and the designer does promise a fairly portable box size. It’s difficult to judge the art and components since a fair amount will be changing.

I will say, based on what I had available, the symbolism is clear and successfully communicates most of what it needs to.

My primary criticism may be addressed on the final copy of the game, but I’d really like to see the theme more played up in the game’s graphic design. The designer and I have had conversations regarding this and I’m confident he’ll produce a final product that’s visually appealing.

Components as a whole are fine, but I do look forward to seeing the final product.

I really enjoyed the abstract puzzle BloodRunes brings to the table. I think there is a nice twist here on the standard set/pattern collection game and there is a TON of player interaction.

While the mechanics of the game are fairly straightforward, the strategy requires a good amount of planning and resolve to execute. This means the accessibility is there for more casual players, but the depth is in place to please more serious gamers.

There is a nice push and pull when it comes to drawing and playing cards throughout the game. While your spell cards are face up for all players to see, there is still an element of not wanting to “show your hand.” I found patience and planning to really pay off as you gather runes to meet patterns and seek to find the perfect time and order to play your spell cards. Of course, it’s easy to get distracted by a new spell or rune card that just surfaced. These can really derail your plans since you only have a limited number of actions per turn. It always felt like I was 1 or 2 actions short of accomplishing my goals each turn—which is a sign of a good game!

I think it’s fair to say BloodRunes is also a bit of a mean game. In fact, there is a bit of player paranoia floating around the board through the game. At any time, another player may steal a hard fought acolyte or blood rune from your collection. This requires players to carefully defend themselves as well as take advantage of opportunities to pillage another player’s stash. That might not be for everyone, but I really loved the aggressive interaction present in each play. Now you could play it straight and just target rune stones when they appear minus the interaction, but a) that’s not as fun and b) you’ll have a hard time winning the game against more aggressive players.

I mentioned the strategic depth and planning, but the game still brings plenty of uncertainty and luck. You’re often a bit at the mercy of the rune and spell deck cards available. I found myself on the wrong end of the spell deck a couple games. My opponents were able to upgrade their acolytes (additional turns) while I sat at only 3 actions for what felt like forever. This seems like an obvious advantage to my opponents, but while they were busy upgrading their actions, I was planning attacks and gaining valuable blood runes. It all balanced out later in the game and my lead didn’t last, but it does prove that the luck can potentially be strategically mitigated.

Again, I was really surprised at how much I enjoyed this one! I think it’s a satisfying, competitive puzzle that’s going to require patience and planning. When your careful planning pays off—it feels great. The game is super accessible, being quick to teach and quick to set up. Now It can be pretty nasty, so if you don’t like negative player interaction, this might not be for you. But, if you embrace that competitive spirit, there is plenty to reward you here.

The game length can vary quite a bit depending on the player’s style of play so you really do need to plan to play between the recommended 30-90 minutes.

Everyone who played BloodRunes really enjoyed the abstract puzzle and cutthroat race to the finish line. Fans of abstract puzzle games will appreciate the unique approach here. I LOVED that each player had to achieve their patterns from the perspective of their seat at the table. While it provided a little freedom knowing that someone couldn’t “steal” my pattern—they could play a rune on top of it or even use it for their own advantage. You just have to be constantly aware of your opponent’s spell cards and their objectives. You can easily end up helping an opponent while trying to help yourself.

I really hope fans of more strategic, abstract games will take a closer look at this one. I’m glad I did and I really enjoyed it.