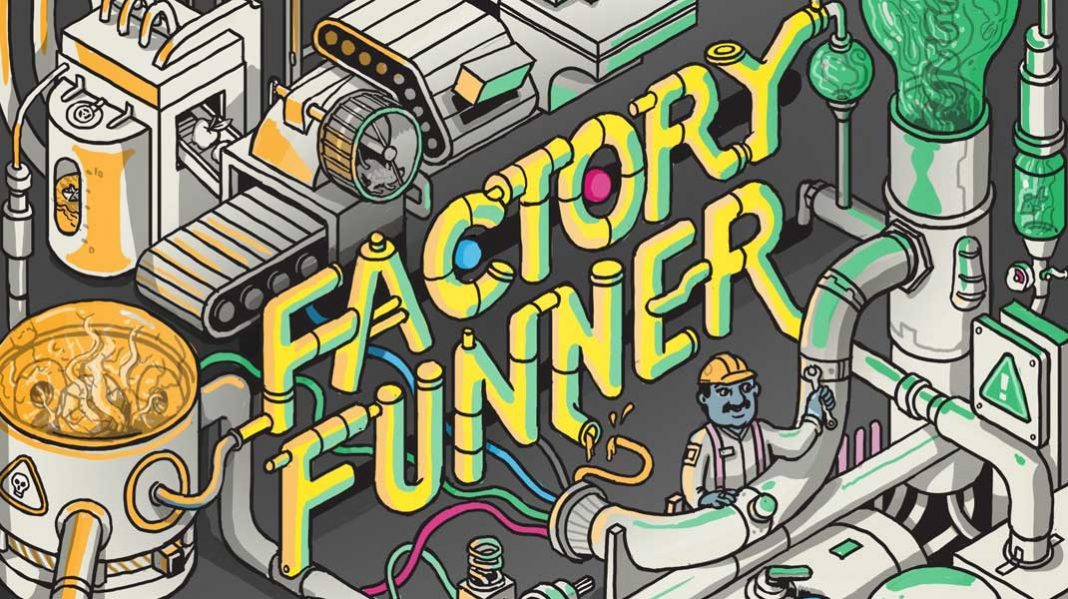 Factory Funner is a fun, quick, puzzle with a quick-draw element for getting the best machines to make your factory go. (“We are Pakleds from Star Trek: The Next Generation, we need pieces to make our factory go. We want to make it go good.”) Although it describes itself as a real-time game, I think “quick-draw puzzle” is a far better description. In Factory Funner, you are the boss and designer of a factory that makes some sort of…undefined…randomly colored…product (?), and you will have to set your machines that make this mysterious goo and connect them by the most efficient, if not convoluted, pipe system in a way that leads to most efficient production and the greatest amount of profit. It’s really an abstract puzzle with a vague factory theme laid over it where the player who can identify which piece is best for them and grab it fastest wins if they have earned the most money after 8 rounds.

Each player takes a board representing their factory floor. Each board is two sided, with the A side being an even game for everyone, and the B sides being varying levels of difficulty. Each player also takes a vat of raw materials of each of the four colors and 3 empty vats to receive whatever products are made. Players are limited to 1 of each color and 3 empty vats. Place a piece representing your factory on the $10 spot on the score track, take 8 random machines, face down, and hit the factory start button (by which I mean start the game).

Each turn the players will go “1, 2, 3, flip!” and flip over one of their machines. Here is where the “quick draw” comes in. You can grab any machine anyone has flipped in order to place it on your board, but beware: the first piece you touch you MUST take, and if it turns out you can’t place it, there is a penalty for taking it, and you don’t get to make any money (points) on your turn. Once you’ve chosen a machine tile, place it anywhere on your factory floor, and then the puzzle begins.

You have a more or less unlimited number of different types of pipes to work with to make it where all your machines work. Pipes can overlap as long as they don’t try and enter or exit on the same side of the same hex. You have raw materials that you’ve got to get to the machines and then you need the materials the machines produce to go somewhere; they can’t just spill onto the factory floor. Your options here are to either have what the machine produces go to another machine, which is the thing to do because it will give you massive bonuses at the end of the game; or, the machine can empty out into on of the generic white vats, but you only get 3 of those white vats, so you are limited in what you can do. There’s also black “end products” that empty into black vats, which are unlimited. If you’ve grabbed a machine you can’t make work, you have to discard the machine and take the penalty. When the round is done, you get the money for the value of the machine you placed, but you also have to be able to pay $1 for every other part you placed besides the machine. You can remove pipes and vats and even the raw material vats for free, but when you place them back onto the board, you have to pay $1 for them again.

The machines need input, represented by dots; and they output represented by a number. If you’re running one machine into other, even multiple other, machines, the  number can only feed the number of dots equal to or lower than its output value.

Repeat this 8 times, calculate for bonuses for machines feeding into other machines, and the person with the most money wins.

The game plays 1 to 6 players.

The solo mode is really just working through the puzzle of building a factory with whatever you happen to draw. After 8 rounds, you see what your score is. The higher the better.

This game is quick, 20 to 30 minutes max. It’s really only lengthened by how long it takes everyone to decide whether or not they’ve placed their pipes in most ideal way. I suppose analysis paralysis could lengthen this game indefinitely, because there may be near endless possibilities for perfect placement, but I think most people are going to feel satisfied they’re ready to move on to the next round in a reasonable amount of time.

The main variability comes from what machines are available for quick-draw each round. Beyond that, every game it pretty much the same. Nonetheless, I think the ever changing puzzle will keep it from wearing out its welcome for a long time; and after a little time away, can draw people back time and time again.

All the components with this are thick, well produced cardboard. The art is plain, yet attractive and nice to look at it. But the most notable thing about the production is the inserts! This game is packed incredibly tightly into the box, but because of the wooden inserts, it fits absolutely perfectly. And thanks to this basically flawless storage system, when you pull it out to play, you just lay out the boards and the inserts, and this game is ready to go! I’ve never seen inserts this good come with a game. This is a masterclass in how gaming companies ought to produce their games. I’d pay an extra $10-$15 for games, for any game, if I knew every game were going to be this well packaged, organized, and quick to set up thanks to their inserts.

Did I mention the inserts? I realize that’s an odd thing to stand out about a game, or often something that means the game is flawed but by no means! The game is good, we’re going to recommend it…but these inserts are awe inspiring.

…the hum of the factory floor was music to the ears of the entrepreneurs who had set out to build a factory that really put out a great product…a great, blue, or black, mysterious product…that probably did something…But people were willing to buy it, so who cares.

But then the sound of a viscous liquid hitting the ground was compounded by steam coming from overloaded pipes, and all I could think as the explosion came was, “Wow, what a colorful explosion. I hope the world will buy my multi-colored goo.”

We actually received this for review at the exact same time we played Galaxy Trucker for the first time, and that left me unable to think about Factory Funner without comparing it: Factory Funner is WAY better Galaxy Trucker. Galaxy Trucker is a light puzzle built as quickly as a possible, followed by a bunch of randomness at the end, that while sometimes hilarious, is mostly just frustrating and a ridiculous game. Factory Funner, on the other hand, is a mind bending puzzle, where truly the best, most efficient, and quickest of mind will probably win.

This is going to be staying on the shelf for when we are feeling up for burning our brains with something that is quick but really thinky. We’ll also be pulling this out with a lot of non-gamers who we think will really resonate with trying to put together the best system and enjoy a good puzzle. We weren’t so sure we were going to like the game at first glance, but it’s actually really fun and we’re going to be pulling it out far more often than we ever imagined. We recommend this game for anyone that enjoys a puzzle and needs a quick game that will leave you always going, “Okay, if I put this here, that will produce this, but that will mess up those pipes, can I re-route that to go over here?…” Factory Funner is a really fun, quick, puzzle that gives you a real, if abstract, sense of accomplishment at the end of every game.

As a brain twisting puzzle 9/10

For the storage solution 10/10