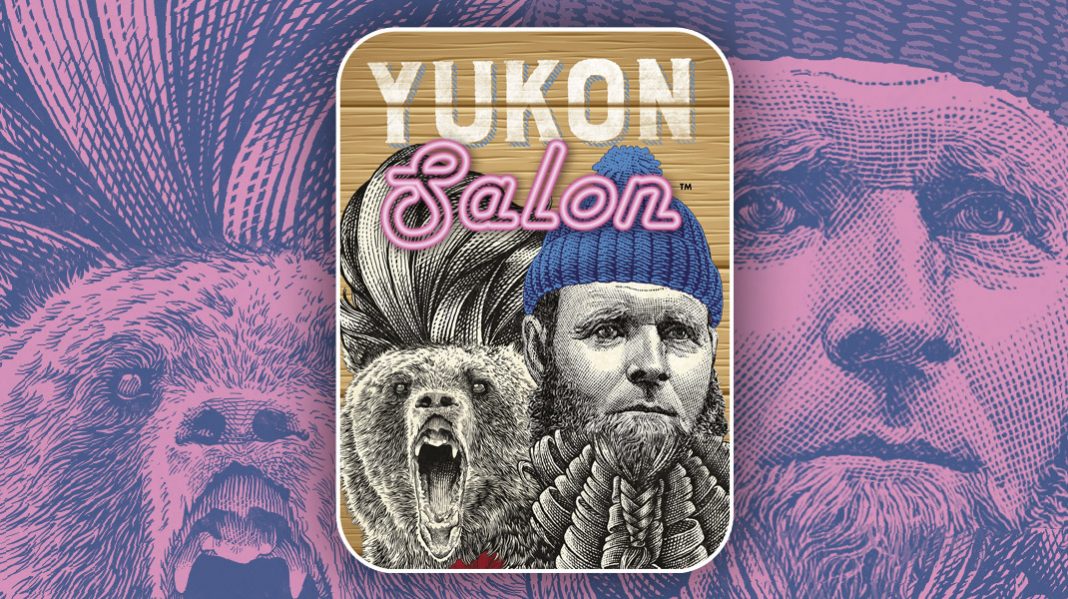 Working as a stylist in the great white north can bring in some interesting clients. In Yukon Salon, you’re clipping lumberjack beards and doing up grizzly bear hair-dids in this quick, silly push-your-luck/set collection card game.

Game play takes place over a series of turns where players will be performing hairstyles in hopes of earning happy clients and gaining points. Each client and cut produce a variety of points and bonuses which when effectively paired together can create multipliers and bigger scores.

To begin, each player receives a number of style cards. Each style card might be a hairdo for a bear or flipped upside down and serve as a beard for a lumberjack. A lobby of 4 client cards are then placed in the center of the table where they patiently wait for the next chair to open up.

On a player’s turn, they will be able to perform 2 of 3 possible actions: Seat a Client from the Lobby, Draw a Style Card or Style a Seated Client.

Clients waiting in the lobby might be a lumberjack or a bear. Each lumberjack features a colored toques (hat) while the bears each don a colored corsage. Each client also features a special ability and value. Seat a client is limited to 1 at a time unless you gain the ability to seat more.

Each style card features a unique action and value and there is no limit to the number of style cards you can hold.

When choosing to style a client, you’ll pair a style card with that client card. The combined value of both cards will then need to be met with a roll of two dice. If you’re able to roll a value equal to the total card’s value, the client leaves happy and you gain points equal to that combined value at the end of the game.

If you’re unable to match or beat the value you have a couple contingency options. You can discard style cards to increase your die value by +1. The other option is to make verbal claims to the client and your fellow players describing how “good” the client looks. You’ll need to make enough unique claims to match the difference between the card values and your dice roll. You may then re-roll the dice in hopes of meeting the value. If you’re still unable to meet the value, you discard the style card and the client remains seated.

Successfully serviced clients will then provide a variety of actions and abilities to earn you additional points. A lumberjack may give you an extra point for each red hatted lumberjack you collect or a bear may provide a bonus for like-colored corsages. The actions might allow you to seat additional clients or draw additional style cards.

At the end of the game, you add up the points from your successfully serviced clients and the highest score wins.

Yukon Salon comes in a nice metal container. It’s a little big for the product, but it’s fun and provides additional value to the game. The deck of 54 cards is pretty standard – nothing too exciting, but does the trick. The 2 wooden dice are standard size, but do have a custom bear face in place of the 1 pip.

The artwork for Yukon Salon is about as silly as the game sounds, but it does have a cool twist. Lumberjack images are taken from a historical book on the state of Iowa published in 1876. The interesting woodcut-style illustrations for both lumberjacks and bears provide the game a good amount of personality. The graphic design fits well with the strange theme bringing together the world of stylish hair cuts and the rough wilderness.

The main thing that attracted me to this dice rolling, set collecting card game was the silly theme. I’m a big fan of humor in my games and the bizarre combination seemed right up my alley. Unfortunately, that’s about where the appeal ends.

I’m am a bit disappointed, but there are a number of things that didn’t work for me in Yukon Salon.

For starters, I loved the idea of mixing and matching hair/beard styles, but they don’t really align like they should. Both the beards and hairdos don’t look right when paired with the client card. I realize this is a stretch to begin with, but there just isn’t any continuity there and they feel really forced. This kind of spoiled my initial attraction to the theme.

On top of that, the mechanics just don’t have lot going for them. It feels like a micro-game that lacks any strategy. The push-your-luck element wasn’t that exciting and the set collection never really got legs. I was never able to capitalize on pursuing any bonuses and many of my earned abilities remained unused throughout the entire game.

While I’m not faulting the game for it’s integration of luck, there just seemed to be too much luck involved when it came to finding the right pairing of client and style cards. You’re essentially at the mercy of the 4 cards available. It’s a quick game, but it felt like it ended before you could really get anything going.

Yukon Salon has some fun inspiration behind the theme, but the execution just isn’t there. In a lot of ways it felt like a joke that keeps getting repeated until it wears out its welcome.

It is a quick game which does improve its overall appeal. My younger daughters had a good time mixing and matching the clients with the different styles.. unfortunately, that didn’t involve actually playing the game.

Overall, the decisions made in the game don’t present much of a challenge and they really just didn’t seem that interesting to me. I wanted to love Yukon Salon, but I was left sadly disappointed.