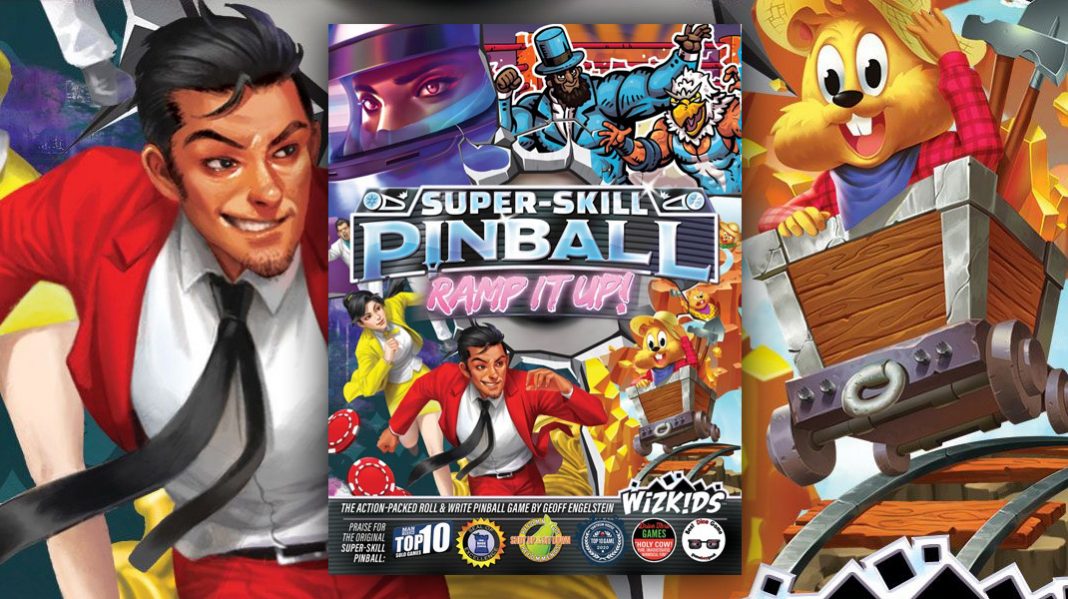 Every time I sit down to play Super-Skill Pinball, The Who’s Pinball Wizard starts ringing in my head and I’m instantly taken back to the glory days where the pinball machine was king. Of course this has very little to do with the game and everything to do with nostalgia, but the goal of Super-Skill Pinball is obvious: tug at those sentimental heart strings and emulate those past experiences standing next to a machine, timing the flippers and ringing in thousands of points … And for the most part Super-Skill Pinball: Ramp it Up succeeds.

Harnessing the energy and skill from a game of pinball and transferring it to a static, 2-D game board is a tall order. There’s no dexterity element and quick reflexes are not required. Instead, the designer has smartly introduced gravity into the game and created a combination of decisions and luck that simulate the excitement of unexpected bounces and potentially big scoring combos.

While it’s not exactly pinball in the traditional sense, the look and flow of the game cling tightly to the source material. Everything seems to be in place for a unique and appealing experience. I’m going to take a look at the mechanics, the emotional experience and the components to see if this ambitious idea of a game pays off.

In this follow-up to the sleeper hit from 2020, Super-Skill Pinball, players begin by selecting 1 of the 4 provided pinball boards. The boards each feature their own unique theme and level difficulty.

While pinball machines are a solo experience, here you can play up to 4 players simultaneously. Each player is essentially playing their own game, but dice rolling duties can be shared. It’s also nice to have have others close by to share your personal victories and defeats (just like real pinball).

The idea behind the game is that the pinball enters the board similar to how it would on a physical pinball machine. It then begins to pass through a series of scoring points before its batted back up the board or lost beyond the bumpers and flippers forever.

Each board contains different zones where players can score points. As the ball ricochets through the board, gravity eventually takes it toll, brining the ball back to the bottom. This is achieved by rolling a pair of dice. Players then have the opportunity, depending where the ball is, to send it to a section with one of the 2 die numbers available. The ball must respond like a real pinball would and make its way down the board’s zones. There are ways to keep the ball dancing around a spin cycle or bouncing between scoring pegs earning multiple points, but you will eventually come back to the flippers.

When you bring the ball to a certain section, the valid die number is marked off from that section. That specific die number at that location can’t be used again until it’s refreshed (new ball, goal achieved, etc). Many locations provide immediate points – typically 1 or 2 points. Successfully achieving a bonus can easily earn you 10, 20 or even 50 points.

The flippers, along with the inline and outline of the pinball board, each feature a variety of die options. This section of the board functions slightly differently. When these die numbers are exhausted or can’t be met the player loses that ball and they aren’t refreshed until the next ball enters play. The flippers also employee physics such as the left flipper only being able to push the ball to the right of the board and the right flipper doing the opposite.

Throughout your play, you might also be able to unlock bonuses just like a real pinball machine. Players might receive a multiplier, unlock areas of the board or receive a second pinball to knock around.

Players get 2 pinballs per game. Once the second ball is lost, the players tally up their points.

The components are ok. The boards are fine and easy to write and erase as necessary (and you will be writing and erasing a lot). Each board is made up of 2 separate pieces extending the play area. The pinballs themselves are silver half-balls that you push around the board. They do an ok job. Since they’re round, they’re kinda hard to pick up. I often found myself having to slide the ball through areas that I had written in. It doesn’t really mess up the writing too much, but I still had a little trouble doing this. As with any roll and write, I’m terrified I’m going to get marker on my game table. With Super-Skill Pinball, you’re fiddling with the markers constantly and this made me paranoid.

The rulebook does its best to clearly communicate a game with more rules than you would expect. The basics of the game are fairly straight forward, but each pinball board has its own unique set of rules. It was a bit of a challenge to grasp the general concept since it’s a bit abstract, but the rulebook does do a fine job breaking down the rules, the different boards and different challenges each board presents.

The artwork for me is a mixed bag. I get that they’re trying to embrace some of the silly ideas originally brought to life by classic pinball machines, but some of it just didn’t work for me. The Top Speed racing board has some of the most exciting artwork and the Gofer Gold design was fun, but I wasn’t a fan of the Pin Pals wrestling-themed board. The artwork here seems a bit sloppy and I feel a little more effort could have been put into it. The artwork, whether good or bad, doesn’t affect the gameplay. The graphic design, on the other had, is well done and provides clear direction for a potentially chaotic game.

I suppose I went into it expecting a silly exercise in luck: roll the dice-score some points-do it again. To my surprise, to be successful you’ll need to bring your thinking cap. There is a decent amount of strategy with calculating odds.

The game is all about playing the odds. Each station only allows for so many stops and you have to carefully plan when to visit a location, activate one of its die options, and when not to.

You can approach the game casually and just enjoy the experience, but to score big points, you’ll need to plan your attack. Each board provides a number of opportunities for bonuses. Executing these bonuses at the right time could cause a 100 or 200 point gap in your final score. This might mean thinking outside the box and holding off on activating a bonus until your next ball (since the flippers will refresh).

Earning that second ball or multiplier at the right time is exciting. With 2 balls on the board, each takes the value of 1 of the 2 die rolled. I did love scoring 25 or 50 points for one action with the multiplier and it did make me feel like a pinball wizard for just a moment.

Where there is a fair amount of strategy, the theme is still a bit of a gimmick… But, is that a bad thing? I think that really depends on the player. I actually love the theme. In fact, it was the theme that led me to seek this one out. As I mentioned before, I love the nostalgia the game evokes. I play board games in part for the traditional, tactile nature. For that same reason, I’m a fan of pinball machines. Maybe it’s harsh to call it a gimmick, but if theme was something that didn’t connect with me on a nostalgic level, I may not have given it a chance.

While the depth of the game was a bit of a surprise, the gameplay isn’t super exciting. The thrill of the game lies solely on the theme. There are some interesting and challenging game boards with some unique puzzles. Being able to temporary solve those puzzles and earn big points is thrilling, but I don’t think it’s strong enough to stand on its own as a whole.

That doesn’t mean the game’s not fun or the game’s not for you. It’s relatively inexpensive and because of that, it provides a solid value. The 4 different boards give you plenty of game to work through and the 1-4 player count almost guarantees you can play a game or 2 no matter who’s around. I should also mention how each game will be different just based on the luck factor alone.

So is it for you? If you saw the game and were instantly drawn in by the idea of a pinball board game… this game is probably for you. Even if you don’t fall in love with the gameplay, the theme and idea behind it all is pretty great. I appreciate the effort and creativity put into something that attempt to resurrect this type of niche.

Super-Skill Pinball: Ramp It Up does the one thing it sets out to accomplish: successfully translate the game play of a real pinball game to the game boarding world. The games go by fairly quickly and there can be some exciting moments. I was surprised by the level of brain work that went into a single game. I suppose once you get a better grasp on calculating the odds, you can just sit back and enjoy the process.

I do wish the game was a little more accessible. This is the kind of game you’d love to share with friends, but the abstract nature of the game where you have control over where your pinball goes might be a bit much for a casual player.

I’m not sure how often this one will get played, but it is a good value for the price and I love the theme. For those reasons, I’ll definitely keep this one around in hopes to break it out when time is of the essence or I’m feeling nostalgic to become a pinball wizard once again.