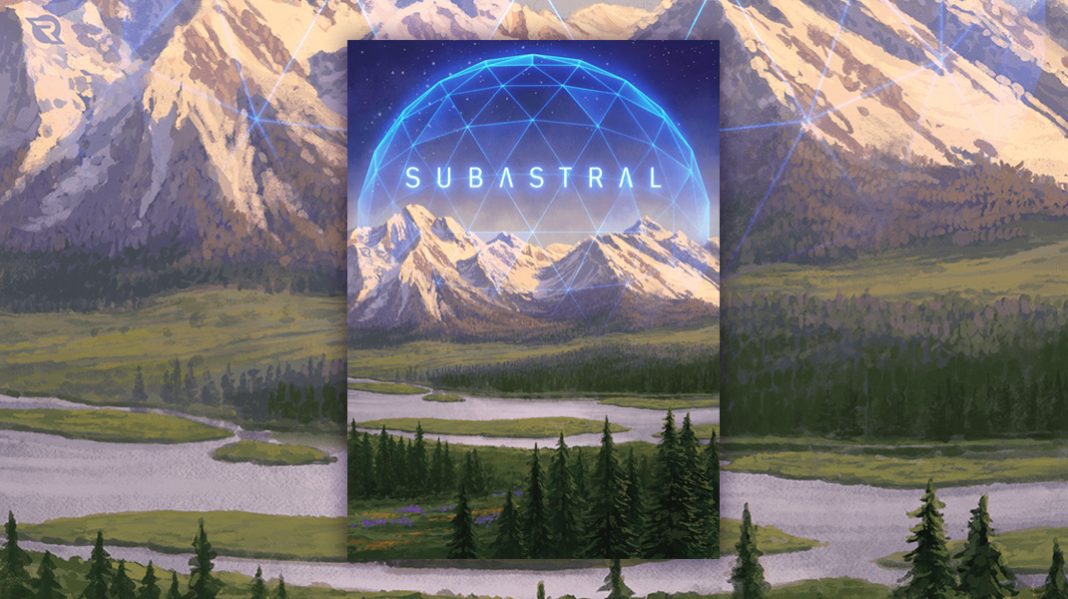 In Subastral, you’re gathering information about the earth’s different biomes and writing them down in your journal in hopes of creating a deeper and more diverse study.

On the surface, Subastral has everything you need to have critical and commercial success on paper. Matt Riddle and Ben Pinchback are the minds behind a number of quality games over the last decade including: Stellar, Fleet: The Dice Game and Wasteland Express Delivery Service. Add in the artistic styling of Beth Sobel (Wingspan, Calico and Viticulture) and you’ve got a pretty sweet setup. Not to mention a beautiful nature theme that creates instant engagement.

In this quick, set collection card game, you’ll be playing a card and then drawing additional cards into your hand or playing them as part of your journal in hopes of scoring the most points at the end. That all might sound pretty straight forward, but there are some fun and challenging twists added into the mix.

The setup consists of preparing a deck of biome cards based on the number of players. Once shuffled a game end card is placed towards the end of the deck (again determined by the number of players). A series of 6 cloud cards are placed in numerical order (1-6) in a line in the center of the table. Players are dealt 3 cards each and then 6 cards are drawn and placed face-up on top of each cloud card. Two additional cards are drawn and placed on the cloud matching that card’s number value.

There are 8 biome cards in the deck each representing different nature biomes. Cards feature a number from 1 to 6 as well as a factoid about the biome.

Players will then take turns placing one of their biome cards from their hand on a cloud card matching the number value of the biome card. After the card is played, the player has the option to take any available stacks of cards on a single cloud space (other than the one they just played on). Taking cards from a cloud space to the left of where they played will be drawn into your hand for future use. Taking cards to the right will be placed into your journal. There is one anomaly to these rules: Playing a card on the 1 or 6 cloud space will allow you to take all the cards from the opposite end of the cloud area (1 or 6 space) and choose to take into your hand or play into your journal any combination you choose.

Your journal is basically a space to display all your gathered cards. Cards gathered into the journal must be placed face up in the order you draw them throughout the game with similar biome cards being played in the same stack.

This continues until the stack of biome cards are depleted and the end game card is visible. Players then finish out the round until everyone has had an even number of turns in the game.

End game scoring is where things get interesting.

There are 2 general ways to score points in the game represented by your journal’s width and depth.

Players will score points based on how many different biomes you have in the a given row of your journal (meaning the first card of each biome you played making up the first row, second row equating to the second set and third row, the third set). The more you have in a row, the more points you earn. Here’s the twist: Sets must start at the leftmost card. If, in the second row, you happen to have 6 cards, but there is a gap after the first 2 you only score those 2 cards. The same rule applies to any additional rows.

The second way to score points is by having a deep set of one biome. Players determine which journal column contains the most cards. Then they multiply how many cards are in the column with the number of the row (beginning from the left, labeling each column 1, 2, 3 etc.). For example: Having 4 cards in column 2 would be worth 8 additional points. Having 4 cards in column 7 would be worth 28 points.

The player with the most points at the end is declared the winner.

Component-wise, there isn’t much to the game. There are 103 biome cards, 6 cloud cards, a sun card (to help players know whether to place a card in their journal or hand), end game card, first player card and a score pad. The deck isn’t over the top, but it’s a good quality and should survive plenty of games. The cloud cards are slightly oversized, but fit nicely in this small box game. The rulebook is simple and clear and the game box feels sturdy with a few spot gloss highlights. Overall, it’s pretty understated, but well made.

Beth Sobel does some fantastic work, this is no exception. While there is limited artwork in the game (only 8 different biomes and a few additional odds and ends) she makes the most of it – painting larger than life scenes celebrating the vastness and diversity of our planet. I especially liked the misty taiga where the morning sun sprinkles across the large trees while a grizzly bear wanders across the foreground.

Despite the game’s creative pedigree, I was still a little skeptical. While I love nature themed games, I’m starting to wonder if they’ve run their course. But, at the end of the day, it’s not the theme that keeps a game coming back to the table, it’s the mechanics and Subastral brings a simple yet unique gameplay all wrapped up in a short play time that’s fun and engaging… and it makes you want to keep playing it.

The game really centers around scoring goals and we need to talk about that more. There is a mesmerizing tension between the two scoring goals. A kind of tug-of-war. Pursuing the goal of having a full set of 8 biomes is a noble pursuit. You can score a lot of points. The question is: How successful can you be attempting to make that happen in multiple rows? In addition, each set begins scoring at the furthest left card – only scoring those cards right next to each other.

Again, pursuing large sets can net you a lot of points, but they almost inevitably contradict the approach to building deeper stacks. Even a beautifully-tall stack of 5 cards in your first column are only going to be worth 5 points total, whereas a stack of 5 on the 8th column will be worth 40 points. Pursuing a stack later in the columns will most definitely impact any goal of chasing after rows. If you can’t see the brilliance in this I’ve probably failed you. Of course you’d have to have 8 unique biomes to begin with before you start building on the 8th column alway.

You’re also at the mercy of the deck. While you know the frequency of each card, there is always a variance with the end game card eliminating a certain number each game. When and where cards will be available might not mesh with your strategy. You’re truly forced to think on your toes… not to the point where the game is dictating your strategy through an over-abundance of luck, but enough so that you must remain flexible.

While I understood the rules going into my first game, I had no clue how to formulate a strategy. It took me 2 or 3 plays before I really started to wrap my mind around what I wanted to do. That said, I was hooked right from the get-go. This one keeps getting better with each play.

I’m trying to think of something critical to say about the game. Perhaps Renegade Games could have gone with a higher quality card stock, but that wouldn’t necessarily improve the game – there isn’t a lot that doesn’t work here. I’m only a few games in, but the think-y nature of the game tied together with the accessibility of the quick setup and game time makes this a real winner.

Subastral is an intelligently designed, easy-to-teach, quick-to-learn, quick-to-play, think-y card game with a theme that will appeal to almost anyone. It does have a bit more of a serious tone and the challenging puzzle (while anything but difficult) may not appeal to more casual gamers. Fortunately, the nature theme and beautiful artwork should put anyone at ease. I appreciate the simplicity and unique approach to the mechanics and I’m excited to introduce it to friends and family. This is one of those games that I keep thinking about days after playing it… it makes you say “lets do that again.”  I think I’m going to stop this review and go play it right now.