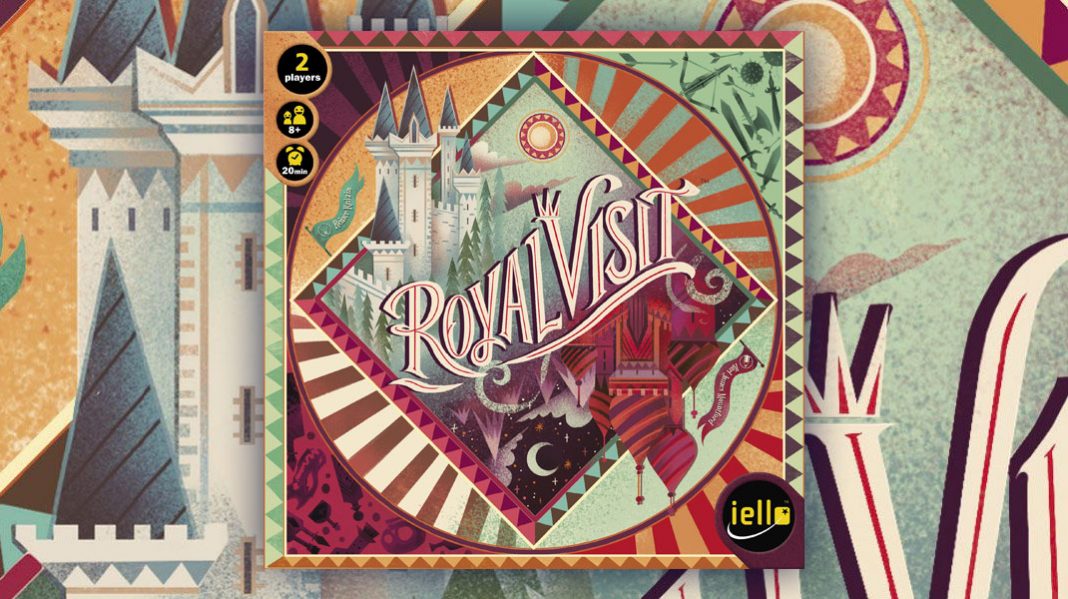 Originally published in 2006, IELLO is bringing back Royal Visit from acclaimed game designer Reiner Knizia (Tigris & Euphrates, The Quest for El Dorado, Modern Art). In this 2 player tussle, you will be vying to attract the King to your Chateau. You’ll need to sway the entire king’s court with the special help of the Wizard and Jester. Draw the king to your estate and your name will be adored in the kingdom by all.

In this simple, yet thoughtful hand management game, players will be working to lure the King and his court towards your Chateau. Playing the right hand combinations can sway the royal court, earning you points. Victory can be yours if you’re able capture the Crown Token or draw the king into your Chateau. Things can get tricky though as the royal guards will always be working to keep the king safe while the Wizard and Jesters special abilities can quickly shift the balance of power!

The idea behind Royal Visit is a game of tug of war, using your hand of cards to manipulate the character pawns, earning points for drawing them to your Chateau.

Each player’s side of the board (or Dutchy) is made up of 8 spaces along with a Middle Space. To set up, the King is placed in the Middle Space on the board and he is flanked by Guards (making up the King’s Court), one on each player’s side. Players will then each blindly draw a final pawn – which will be either the Wizard or Jester and place them on the next closest square on their side next to the Guards.

Players will manage a hand of 8 cards throughout the game that refreshes after each turn. These cards feature one of the characters on the board (King, Guards, Wizard, Jester) and when played will draw that character a certain number of spaces toward your Chateau. Like-character cards can be played one after the other, increasing your pull.

Each character card also features some variations. While the King can only move one space, playing two King cards together will also move the entire King’s Court (King + both Guards) one additional space. The Guard cards feature one of 3 different possibilities, move either guard one space, move both guards one space or move the entire King’s Court one space. This is also where the game gets a little tricky: The King must always be between the two Guards no matter what.

In addition to the Court, the Wizard and Jester sit nearby waiting to stir things up with their special abilities. While the Wizard does feature three separate valued cards (moving 1, 2 or 3 spaces), the Wizard’s power lies in its special skill. On your turn, you bypass playing a card and instantly draw any character to the space the Wizard is on (keeping the King’s rules in mind). The Jester cards, on the other hand, can be played as wild cards selecting any specific pawn and moving them the number of spots displayed on the cards.

The final two spaces on your Dutchy are considered part of your Chateau. For every pawn sitting in your Chateau at the end of your turn, you earn the right to move the Crown Token that many spaces toward your Chateau. Scoring-wise, the Crown Token acts in a similar way as the King’s pawn. It begins in the Middle Space and victory is won if you’re able to lure it completely into your Chateau.

Royal Visit is a small box game with some nice components. The pawns are all nicely sized, made from wood and feel heavy. The Crown Token is also decently heavy and made from wood. The cards are standard sized and are similar to your standard, glossy playing cards. The game board is made out of fabric and unrolls for game play. The game’s insert provides a place for everything to be stored. The rulebook is very clear and easy to follow making learning the game a breeze.

The game’s artwork is fun, stylish and whimsical. I appreciate the unique color pallet used and the illustrations have a lot of flare and class. The cards and pawns are all really well done and add a lot to a game with very few components. The box art is also attractive in its own, selling a world of Kings, battles and dueling Chateaus. It also features a nice spot color to help it stand out on the shelf.

Royal Visit is a game where the two participants are forced into a game of wits. You could argue that luck does play a role, but given a hand of 8 cards at all times, you’ll always be able to counter your opponent in some fashion. For the right opponents, the tug-of-war style of play produces genuine tension. With only 8 spaces on either side, the pressure and anxiety are real with each passing turn.

The game’s strategy tends to border somewhere between brute force and calculated risk. Where you might do nothing to attempt to hide your motives forcing the other player to respond as they might… The other approach is carefully building your deck to play valuable combinations and forcing big swings to the playing field.

Similar to the 2-player game Lost Cities (also by Knizia), the mechanics are incredibly simple (although just slightly more complex than Lost Cities). I think it’s that accessibility that makes Royal Visit appealing. You can learn everything about the game in 5 minutes, setup in 2 and finish your first game 20 minutes later. It’s easy to play best 2-out-of-3 without breaking a sweat.

That same adoring simplicity can be another’s lack of complexity. Royal Visit is likely a game you’ll need to be “in the mood” for. I played with a number of competitors and came away with mixed reviews. Where the tug-of-war approach is somewhat disguised in a hidden hand full of cards in Lost Cities, everything is more on display in Royal Visit. There isn’t quite as much mystery and many times the results were written on the wall forcing you into playing reactionary vs strategically. When you’re on the losing end of a game like that – it has the potential to leave a bitter taste in your mouth.

The artwork and production in this new, revised edition is really great. The combination of engaging artwork and interesting, high-quality components really draws engage you. I think the visual appeal alone will draw people in who might otherwise give it a pass.

Overall, I really enjoyed Royal Visit for what it was. I loved how accessible it was. It’s super easy to learn, quick to set up and fast to play. It also presents a unique set of mechanics someone looking for a gateway-style game might not be familiar with. In that case, I think it will be a success and be one that gets lots of table time. The other side of the coin is in the game’s simplicity. I could see more seasoned gamers losing interest after a couple games because they’ve “seen all they could see” here. Is Royal Visit for you? I think you ultimately have to decide which side of the coin you’re on. It is a simple game (maybe to a fault), but it could also serve as a solid gateway game drawing non-gamers to your table and eventually into the hobby. The production is high-end and at the very least would look good sitting on your board game shelf.