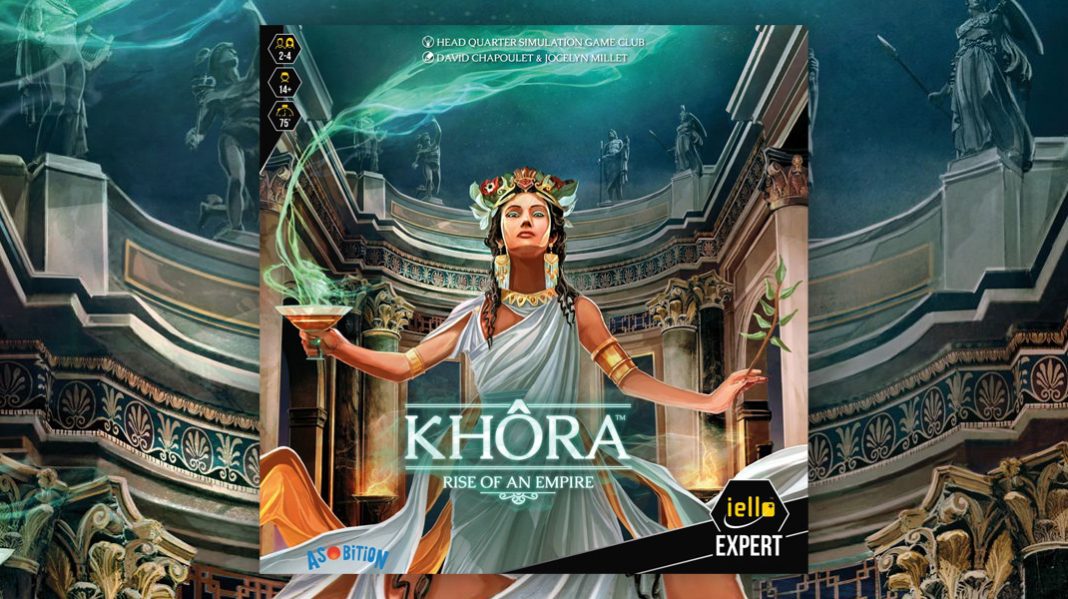 Serving as head of a growing city-states in Ancient Greece, you’ll pursue 7 different avenues in an effort to earn the most glory. Compete in philosophy, legislation, culture, trade, military, politics and development in this tech-tree driven game where you’ll choose actions, boost your tracks and build an engine to capitalize on the virtues you choose to pursue. Begin with an asymmetrical city, leverage the luck of the dice and chase after a number of unique paths to victory in this quick playing, historical euro.

I LOVE quick playing, think-y, multi-player, solitaire-style euro games. On the surface, Khora: Rise of an Empire looks like it has it all: plenty of tech tracks, simultaneous action selection, more tech tracks, glorious euro-khaki colored boards and community scoring goals. It even scores bonus points for some really solid artwork AND asymmetrical player boards. I always think it’s fair to air my expectations going in and Khora does almost everything right on the surface.

The asymmetrical player boards provide a unique path for personal development goals and that’s enough to give direction to each player going in.

As I mentioned in the intro, the theme centers around Ancient Greek city building. It’s somewhat tied into the actions, but it does provide a cool backdrop for a game of token pushing.

Each turn you’ll roll a pair of dice and apply each of those dice to 1 of 7 action tiles, each providing different ways to build your tech-tree kingdom. And this is a game about tech tracks. The game board prominently features 4 unique tracks (citizens, taxes, glory & troops) that you’ll gain and cash in in various ways through the game’s 9 rounds. Additionally, each personal player board features 3 additional tracks: economy, culture & military.

As you level up certain tracks, you can be the first to achieve community goals or pursue military exploration which earns you knowledge tokens valuable for playing political cards or leveling up your personal development track. Overall, it feels a bit like a ledger or really cool Excel spreadsheet as you’re working to find the right combinations to what will ultimately end with the most points.

While it is primarily a multiplayer solitaire game, player interaction comes in the form of event cards benefiting or punishing players based on certain achievements. The player with the lowest die roll gets the opportunity to play first each round and that can potentially provide advantages when it comes to military exploration.

Once you’ve grasped the concepts and action process, the game plays through the 9 rounds fairly briskly. At the end of the game, players add up points earned throughout, end game scoring bonuses typically played through political cards and a multiplier based on tokens earned and your personal glory track.

Khora is not hiding its intentions as it works diligently to appeal to the hardcore euro crowd. The beige boards and player tokens just feel right. The production team added in some pretty solid artwork that goes a long way bringing the theme to life. The dual layered player boards are pretty cool and provide a place to “drop-in” each individual player faction as well as securely hold player tokens. There aren’t any mind-blowing components, but I’m happy with the board, card and token quality as a whole. The iconography is solid and easy to follow and the graphic design does a fine job accenting the entire production.

➕ This game knows who it’s targeting

➕ Easy to teach and learn

➕ Definitely a game where I can “do better next time”

➕ Asymmetrical factions and political cards add variability to each game

➖ I worry about the long term replay ability

➖ Mitigating the dice with your citizen track never felt that tight

➖ While the game boasts many paths to victory, I worry that’s not entirely true

➖ This is going to appear bland to a casual gamer

If you love tech tracks, this is the game for you! Manipulating and leveraging each track against each other to build the best engine is what this game is all about.

The best thing about the game is the simplicity of the 7 action choices each turn. On the surface they might even feel limiting, but that’s where the beauty of the game comes in as you attempt to strengthen paths where there might not appear to be one.

Khora is a fairly tight, fast-paced euro that will definitely find its audience. The production is really solid and it gives a euro-player pretty much everything they want on the surface. I really appreciate the play time and even toward the end of my testing realized we could play an entire game in about an hour.

For the most part, I really enjoy what the gameplay has to offer. The actions are good and I appreciated the race for community goals and the treasured philosophy tokens. Some of the politics cards felt a lot more valuable than others and while you can draw more of these throughout the game, it seemed the players with the best hand to start the game had a distinct advantage. The game plays quickly and the “worth it” factor rears its head early as you have to determine if there are enough rounds left to justify playing certain cards and pursuing certain benefits almost from the beginning.

I was surprised by how simultaneously tight and loose the game was at the same time. While building certain tracks can be a real challenge, mitigating your die rolls only forces a tough decision every now and then. Planning and efficiency are key. You can often achieve anything you set your heart to, but with the limited number of rounds, may come up short in the long haul (and judging by my final scores… I came up short a lot). That being said, I was able to better myself with each game as I began to understand the system and how to make it work for my needs.

There is a decent amount of variability. The asymmetrical faction and political cards serve as guides to move you forward and they differ for the most part each game. I do worry about the long term replayability. While the factions are different, they’re not THAT different. And while the political cards shift your focus, I was often quick to dismiss the majority of them. I even found myself not using all the actions regularly through the game, but focusing on the 2 or 3 that I felt gave me the best advantage. This is just a perception, but I could see you basically playing out the same game strategy game after game when you get a real feel for everything… And I think all that’s fine. Khora does a great job filling a gap in most gamer’s collection: A quick-playing euro with interesting decisions that you can play in just a hair over an hour. It’s fun for the right group and there is a good value there… and along with an appealing production, gives Khora an advantage in this space.

While I enjoyed Khora, I do wonder how I’ll feel about 10 more plays in 6-12 months from now. For now, Khora is going to stay in the collection. I’m looking forward to refining my strategy as well as using it as a way to introduce an accessible, economic, track-heavy euro to players not that familiar with them. Khora has a lot going for it and it’s one I would definitely recommend for the right crowd.