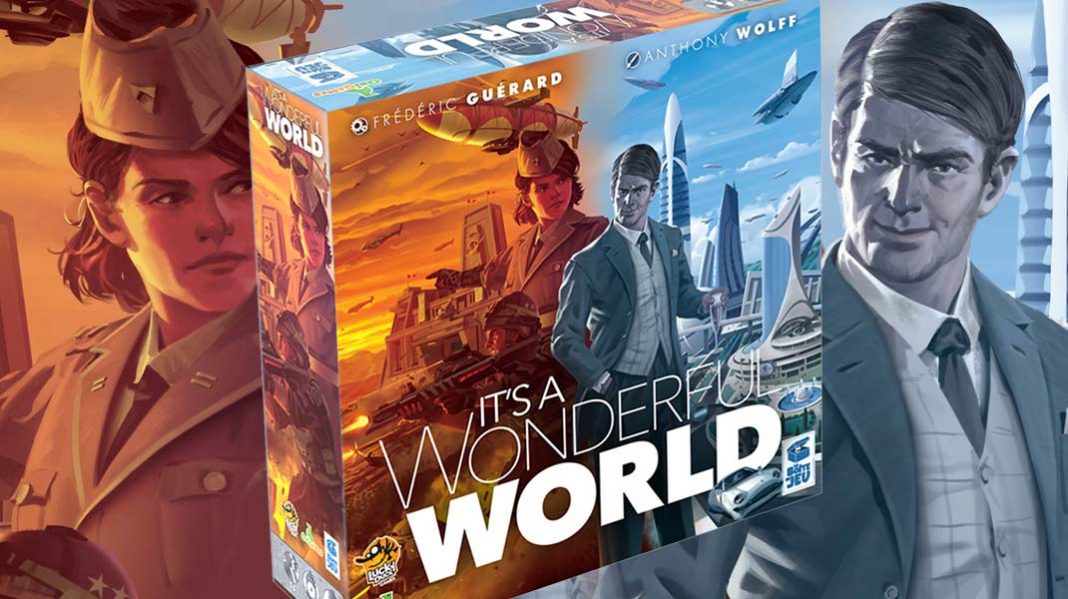 It’s a Wonderful World is a card drafting, empire building game where you compete against your opponents to build a faster, better utopian society. Pursue construction, become a military juggernaut, big business, science or any combination to build harmony and success within your empire.

The game is played over 4 rounds built around 3 phases each (drafting, planning and production). Each player begins the game with 7 development cards. Players then proceed to draft one card and pass the rest on to the next player. This continues until there are no cards left.

The development cards represent the foundations of your empire – buildings, objects and ideas – that allow players to receive resources (colored cubes) necessary to build. Once built, the cards can provide victory points, end game bonuses or even provide additional resources after or even during the current round. You’re also allowed to “recycle” any cards receiving an instant resource bump to use toward completing any development.

During the planning phase, players must decide which development cards they’re going to pursue and which ones they’ll recycle. These decisions are essential for success. Unbuilt development cards harbor no penalties, but expanding your building tableau too fast can cause a civilization to crumble under its own weight. The planning phase essentially consists of two choices: commit to building a development card or “recycle” your development card, gain the specific resource and directly apply it to a current card. Each development card requires a different combination of resources to complete. Once completed, the card becomes part of your empire and can begin to produce resources for the future. Players may choose to place their resource cubes directly on their civilization card. When five are collected on your card you can trade them in for Krystallium which can be used as a wild resource or as needed to fulfill certain development cards.

The production phase follows. Resources are gained based on the value produced by your civilization card as well as any development cards you’ve completed. This is where you get to test the wheels on your engine as your production here really translates to victory. Once these resources are placed on a development card they may not be moved. There are additional bonuses to producing the most resources in a category which will earn you victory point chits that can also be used to meet a cards construction cost.

After four rounds all players tally their victory points from completed development cards including any multipliers and bonuses. The player with the highest total of victory points wins the game.

It’s a Wonderful World also features an easy to setup and follow solo variation that deviates just enough from the game to keep things fair. In additional to the standard solo setup that game has six additional unique scenarios to keep things interesting.

I absolutely LOVE It’s a Wonderful World. I love how accessible the game is. It’s easy to teach and easy to pickup. At its foundation, it’s a simple game to learn and to play: drafting cards, building developments and earning victory points. However, building a powerful engine requires a little luck and a lot of mental prowess and calculating. It typically took around 2 turns for a newbie to grasp the concept and really start to dig in.

Players play their turns simultaneously so there is essentially no down time throughout the entire game. The only time I experienced any drag was when a player couldn’t quite make up their mind in the drafting phase. The game scales really well from 2-5 players without too much variation in play and the games typically breezed by at around 45 minutes. While there is plenty of room for player interaction during the drafting phase, it’s up to you to engage in hate-drafting or just focus on our own agenda. It does have the potential to turn into a solitary-style experience, but the game works to mitigate that with the rotating card draft phase and awards for gaining the most cubes in a particular area of development.

The biggest highlight for me was how versatile the game is. Both veteran and casual gamers alike had a blast. It felt like everyone ended up asking asking for “just one more game”.

While the artwork, components and overall production quality of It’s a Wonderful World is top-notch, the theme seems a little distant during game play. I’ll have to admit in later games it nearly escaped me completely. The over-the-top artwork depicts everything from pirate ships and cavernous adventures to robot intelligence, time travel and alternate dimensions. For me these wacky scenes were just icing on the cake.

All-in-all I’m a huge fan of engine builders and It’s a Wonderful World doesn’t disappoint. Full of interesting and challenging decisions, I had just as much fun in defeat as victory. While the drafting felt like walking on thin ice at times, I always enjoy trying to overcome any misstep with a swift adjustment in strategy. The game is fairly forgiving, but with a potential playtime of 30 minutes, you’re likely going to have another game started before you can dwell too long on any failures.

What’s Great About It:

• There is plenty of re-playabiltiy

• The games decision making is fun and challenging.

What’s Not So Great: