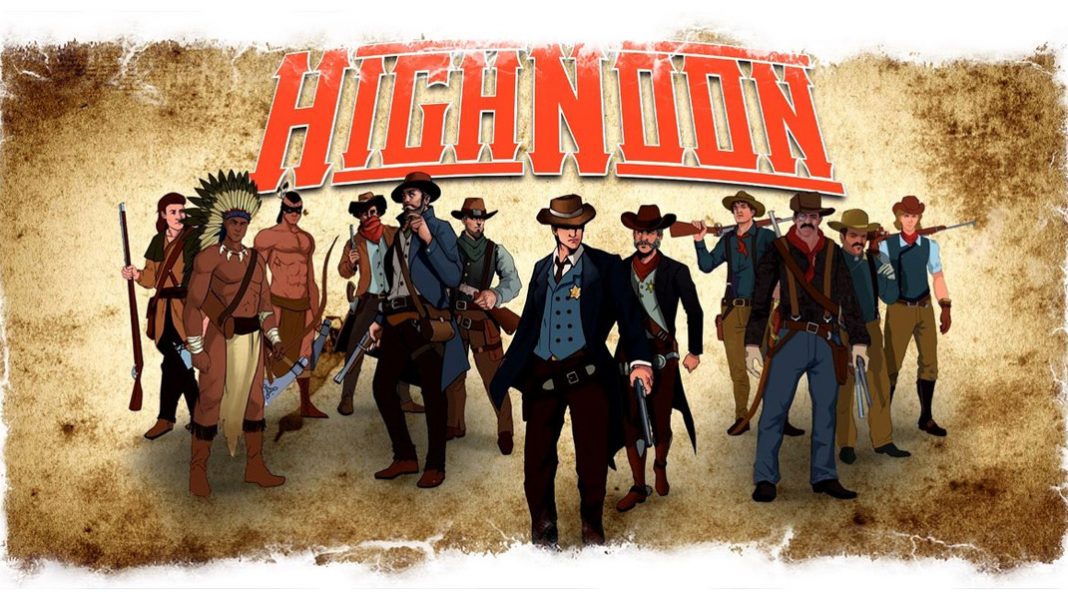 It’s been a long time coming and the posse’s have gathered for a final showdown in the town of Sweetwater Gulch. The meeting is to prove their mettle, establish dominance and settle scores. When the dust finally settles and bullets stop flying, one group will be left standing… and it all starts at High Noon.

In the game High Noon, you’ll take on the roll of one of a number of posses converging on the town of Saratoga. Each posse possesses a different number of members, each with their own strengths. High Noon implores deck building, resource management and tactical movement. You’ll move your troops around the board, gaining the advantage on your opponents by gathering resources, using obstacles for your protection and determining angles to take the best shot. The player who’s gained the most gold by inflicting damage in victory after 12 rounds or remains as the last posse standing is declared the winner.

You’ll begin your assault on Saratoga by selecting one of the 4 posses in the game. The base game offers 4 groups with the promise of more in expansions.

Choose between Elsu’s Warband, Col. Rodgers and his Rough Riders, Sheriff Garrett and Deputy Gates and the nasty Leroy Gang. Each posse features a different number of characters and abilities.

Players will each receive their posses’ unique deck of cards and a few loot crates providing added weapons and benefits.

The board is made up of a number of different sized, gridded tiles with different geographic elements such as the bank or the sheriff’s office. You also have wagons and crates that provide shelter during the gunfight. The board can be pieced together at your discretion creating a unique experience with each game.

Players place their characters on predetermined locations through the board to start.

Each character has a corresponding player card defining their overall health, speed (number of movements), attack range, ammunition they can use, how much loot they can carry and how much gold is awarded to the player who takes them out.

As the game progresses, players take turns performing a series of phases for their entire squad. On a turn you may move a character, perform an action and draw cards to refill your deck.

Performing and action allows you to play a card, loot a crate or dead boy, equip a character with an item or transfer an item.

In order to attack, players will need to play a card. The attack cards must correspond to a specific character. The attack card features a number or value of that attack. When played, the player must define who they are attacking and they must be within their characters attack range. The defending character will then play a card to defend the attack with the difference leaving the defending player with that many injuries. Of course, specific cards have bonuses and special actions that alters the way the battle plays out.

Not all cards are attack cards. Some might equip your character with new, more powerful weapons or provide healing, etc.

At the end of each turn, players will draw 3 cards. A player’s hand can never exceed 12 cards.

Throughout the battlefield, players will find loot crates. These loot crates might give your player weapon upgrades, added defense heath increase or dynamite (yeah, dynamite gets its own category) among other things.

When a player successfully inflicts damage on an opponent they are awarded 1 gold. If they are able to eliminate that opponent, they receive the amount of gold on that character’s card. The reward correlates to the overall value and toughness of that character.

Players take turns until they have completed the 12th round or only one player is left standing.

The artwork and components do a great job of setting the scene and selling the theme. The illustration is solid throughout – particularly on the character and playing decks. The game board could be a little heavier, but I typically found that not to be too much of an issue. The gold bars, and chips are a little small, but along with the loot crates and round tracker, are all good quality cardboard. The round tracker looks like an old pocket watch – one of the cooler pieces in the game. The game’s miniatures are a little more middle-of-the-road. They could have been better, but I’ve seen plenty worse. Overall, the production is solid.

On the surface, High Noon is a tactical game pitting asymmetrical groups against each other across a grid riddled with obstacles and challenges. The theme is great and the characters are fun. In most tactical strategy games you are looking for the most efficient route to best engage the enemy simultaneously positioning yourself for defense (the push and the pull).

Beneath all that is an interesting deck-building puzzle. In High Noon, certain cards in your deck can only be played with certain characters from your posse. This creates a more complex dilemma. It isn’t enough to strategically maneuver your characters into the best position. You must have the specific firepower for that individual character. This complicates matters in the best possible way.

For me, there is a lot in this game that evokes the popular 2-player game, Unmatched. Each posse features it’s own asymmetrical abilities providing tons of new experiences. The varying posse sizes also create added strategy. You could send the sheriff and his deputy up against the Leroy gang with all 5 of their thugs. This is all balanced out rather well with the different player’s health, speed and firing range in addition to special cards for each group (often uniquely triggered only when going up against certain opponents).

These abilities also correspond with the theme. Kiyiya of the Warband must find ways to attack with his speed since he only wields a knife. While Quentin Leroy’s larger gang of two-bit outlaws can only take so many hits.

Upgrading your characters with new or more powerful weapons can give them that edge to make a bigger impact, but if you’re not careful with your play movement you can still be hung out to dry. Plus, equipping your character spends an action and each action is a valuable resource. That aside, the loot crates are limited and often, the added bonuses only last so long (such as a more powerful gun with only so many bullets).

It my experience, it wasn’t always the more powerful looking posse that came out on top. It really came down to who and how they managed their characters and the positions they held on the board. This was a really good sign that bodes well for future games and future opponents.

While there is always a bit luck with the draw on deck-building games – this game really seemed to minimize that. Holding a hand of 12 cards seemed to provide enough options to do something positive. But, if you’re constantly putting yourself in a position where you’re forced to play defense over and over… well, your deck won’t be nearly as advantageous.

Some games were a tad long, but that really depended on the player count and how aggressive (or not aggressive) players were.

The deck-building and tactical movement combine for an engaging experience. There is plenty of replay-ability and the western theme goes a long way in drawing me into the world High Noon has created.

I think it’s important to acknowledge that a tactical game like High Noon isn’t for everyone. Moving characters around a map gives the player a lot of freedom and while it is a puzzle, it’s not one where you unlock a door and receive a secret power. You have to be fully engaged and have the resolve to out-smart your opponents with a more chess-style mentality.

High Noon DOES work well at 2 players thanks to the multiple characters, but the wild, chaotic crossfire created in a game of 3 or 4 makes a much more memorable experience.

For fans of tactical gameplay, deck-builders and western themed games, High Noon is a great choice… especially if you can gather 2-3 friends together. Fans of Unmatched may find this to be a slightly more primitive production, but one that offers a bigger world with new and challenging decisions. Overall, the production and artwork are good and the gameplay engaging. This is a good time with the right crowd definitely one you’ll want to check out.