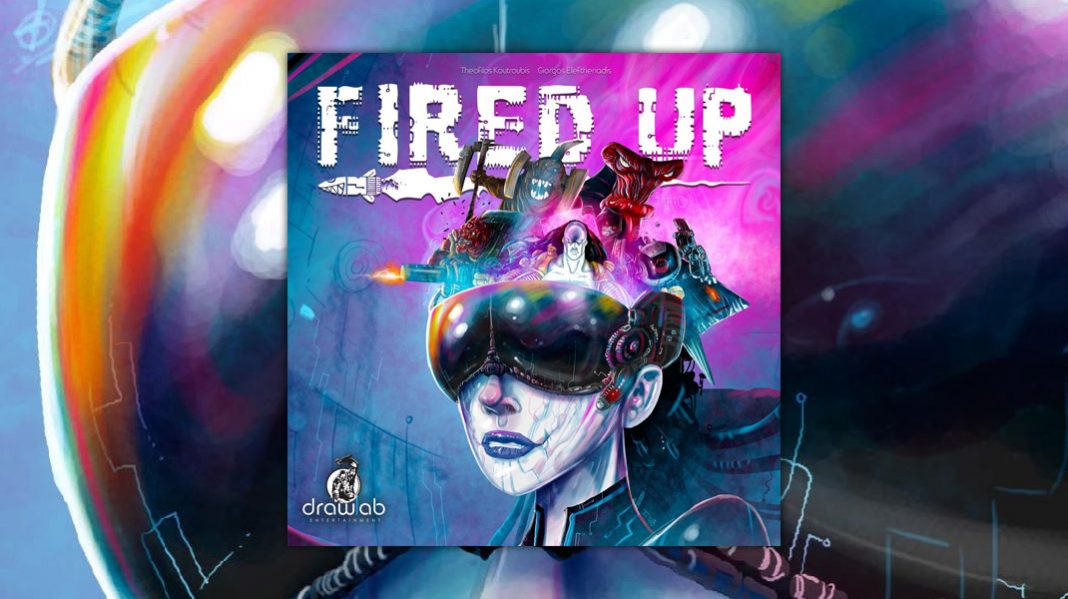 You’ve entered the Fired Up cyber-arena where digital champions from all over the known galaxy have gathered to compete for their supremacy in battle. As audience members, you’re working to influence the fighters to perform the right combinations, triggering highlights to hype the crowd and earn yourself esport glory.

In Fired Up, players will roll dice attempting to influence the attributes of a group of digital fighters locked in a gladiatorial-type arena. Playing dice will allow you access to modify certain attributes and it’s up to you to determine which fighter to affect. The fighters then take turns duking it out by rolling a number attack and defense dice equal to their newly adjusted abilities. Players gain points by achieving pre and post-match objectives as well as betting on the outcomes.

To begin, fighters and their fighter mats are dispersed into the arena based on the number of players. Players receive their own set of influence dice as well betting cards to use throughout the game. Three bet cards are placed on the betting board. These cards provide outcomes players will be able to bet on as the game progresses. Players are then each dealt 4 highlight (objective) cards.

The game takes place over 4 rounds. Each round consists of 2 phases: the influence phase and the battle phase.

During the influence phase, players will begin by selecting 2 of their 4 influence cards to attempt to achieve during the round. Players then take turns rolling their dice and attempting to influence the outcome of the upcoming battle by playing them on the fighters mats or the arena board.

Each fighter’s mat can be influenced in a number of ways. One of the first things you can do is attempt to give the fighter more or less dice to use when they attack or defend. These are separate abilities, but can be influenced mutually by attempting to raise or lower a fighter’s morale. Determining which approach to take to influence a fighter depends on your personal highlight cards you’re trying to achieve. You may have a card that requires a certain number of fighters to have a specific level of morale, but at the same time, have another objective that will cause you to increase or decrease the number of dice a specific fighter rolls in a battle. Of course, your opponent’s play may also force you to get creative with your influence tokens.

Each scenario consists of a series of rounds where players will draw and play cards in an effort to “equip” each player with a set number of points. In order to equip yourself with points, you must have a set of 3 cards that are either the same value or same card-type (identified by color and icon). A set of 3 cards with the same value will give you the points of one of the cards while a set of the same card-types will give you the value of the lowest-card. Some equipped cards provide you with repeating benefits while others might only provide a one-time use.

Players can also influence a fighter’s speed. The fighter with the fastest speed is the first fighter to attack. Playing dice in this area can help a fighter leapfrog other fighters for an earlier attack turn.

Finally, players can alter who a fighter will attack. These particular influence actions can also be locked in by spending more influence dice of a specific type. But, as is the way in Fired Up, there is always a way to undo a player’s sure-fire action… and there will likely be a player who attempts to try it.

Each fighter can only be influenced 3 times per round. With so few chances, this one single element can easily alter your entire strategy.

Players also have the opportunity to spend influence dice to place bets. Bets are placed throughout the game in categories such as who will be the first player to be eliminated from the game.

When all the players have placed all their influence dice the battle phase begins!

The player with the fastest speed that round will be the first to attack followed by the 2nd and so on. During a battle, the attacking fighter gathers the number of corresponding dice equivalent to their attack total. The defending fighter selects dice equal to their defense total and they’re rolled at the same time. Attack dice have a number of different ways to do damage such as the head, body or legs. These attacks can be defended by similar-faced defense dice. Attacks not blocked by the defender will cause damage (or stamina) loss to that fighter. The defending fighter can also get a few licks in of their own. Any defense dice not rolled by the attacker can lead to damage for the attacking fighter.

Each fighter can also whiff with a blank side of the die (fail) or roll a special attack that can’t be defended. When a fighter loses all their stamina, they are eliminated from the game.

The battle round continues until each fighter has the opportunity to attack or one fighter is left standing.

Before and during the battle phase, players can announce at any time if their highlight goals have been achieved. Highlight cards each feature 3 goals, each one slightly more challenging, but slightly more rewarding. If you’re willing to push your luck and hold off announcing your achievement, you may be able to gain more points. Of course, you’re also risking losing all your points for that highlight by failing to announce when you achieve one of the easier goals.

The player with the highest number of points after 4 rounds or when a single fighter is left standing is declared the winner.

When discussing the components of Fired Up, you have to start with the miniatures. Each character is unique and the minis are cool – just begging to be painted. The arena board is a uniquely folded pentagon that gives the game a bit of flare. The other star of the show is the sheer number of custom, influence and attack and defense dice. The game comes with 40 total dice to roll. Fighter mats and the secondary betting board are also fine quality. The additional cards and tokens are all good quality as well – nothing to complain about there.

Mihajlo Dimitrievski is a fantastic artist. He’s done work on the Raiders and West Kingdom series and I absolutely love everything about those. I’m also a big fan of the cyberpunk style the game went with… it will pull me in nearly 100% of the time. That’s why it pains me to say I was a little let down here. Some of the artwork just feels a little incomplete. While the cover art is initially eye-catching and memorable, upon further examination, doesn’t quite get the job done for me. I do think the characters, colors and general presentation fit the theme perfectly. While I don’t love it, I have to acknowledge that the art will be a big hit with a lot of players.

Fired Up is a game for 2-5 players and my initial game consisted of 2 and… (gulp)… I HATED IT! So much of the game’s tension rides on maximizing your influence dice while fending off your opponents as they try to achieve their own objectives. In a 2-player game the tension just wasn’t there. It seemed way too easy to achieve your highlight objectives and my opponent and I rarely crossed paths. At this point the game felt over-produced for what you were getting and kinda dry.

I wanted to love this game… the mini’s… the cool cyberpunk theme… the crazy characters… in-game betting. It was obvious that the game would be better with more players, but how much better?

I sat down to give it another go with 3 players and, I’m happy to say, it totally redeemed itself. The added player created much more movement on the board and really forced me to tighten up my play. The fact a fighter can only be influenced 3 times really forced me to alter my strategy – mostly out of the paranoia I wouldn’t get to do everything I wanted to… which ultimately led to me not being able to do everything I wanted to.

While the meat of the game is based on the luck of the die, the idea of mitigating that luck through influencing the fighters’ abilities is a fun concept. Equipping one fighter 8 attack dice and his opponent 4 defense dice would almost certainly seem to get the job done. This is exactly where the game’s dramatic moments came in. When the attacking fighter with 8 dice rolls 5 failed dice and the defender blocks the 3 remaining attacks AND counters with a damage of their own… well, that’s just cool.

If you want to avoid the luck of the dice entirely, many highlight cards can also be achieved in setup just prior to the start of the battle phase. Managing to create sets of fighter stats (such as 3 fighters with positive morale) or setting up a certain fighter to make the rounds initial attack can be fulfill highlight cards on their own. I found having a mix of the pre and post battle highlight cards to be an effective strategy.

I also really like the ability to influence who a fighter targets during a round. On top of that, changing their position in the pecking order by increasing a fighter’s speed can completely alter the game. When 2 players simultaneously target one fighter in one of both of these areas, it really becomes a battle of attrition.

The only thing that didn’t really win me over was the betting. I love placing a bet in almost any game. While this has a similar setup to something like Camel Up, it just didn’t feel as interesting. It felt like some of the betting outcomes couldn’t be evenly faintly predicted leaving that whole part of the game a big crap shoot for me. While the player at the end with the most stamina is an interesting challenge, betting on the player who first inflicts a specific type of damage seemed a little too random. My opponents thought the betting was the best part of the game, but I stand by this critique.

I was really looking forward to playing this ever since I saw it on Kickstarter. The theme, art and mechanics seemed really unique and interesting… which was why I was in such a bad mood after my initial 2-player game. Fortunately, the 3-player game was redemptive. I think the concept is really interesting and I expect this one to grow on me with more future plays. I also look forward to playing this at 4 and 5 players where I think it will really sing. All that being said, the theme will likely weigh heavily on the game’s appeal. If you don’t love the idea of a digital arena and various creatures fighting each other… probably not for you. If you love the cyberpunk/video game theme and can’t wait to roll the colorful dice and root on bizarre characters as they attempt to pummel each other… Yes, this is one you should check out!