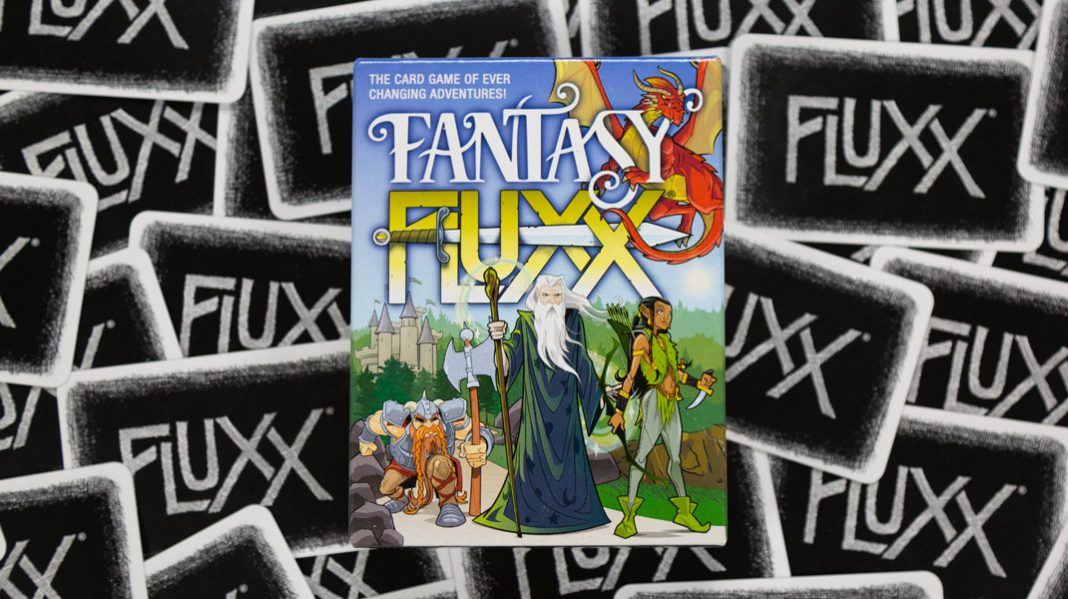 Part of the ever-growing, highly successful Fluxx line of card games comes the latest concoction from the lab: Fantasy Fluxx. Join mighty wizards, cunning elves, beautiful princesses and fierce creatures in this dueling card game of constant change and evolving goals. If you can muster the wherewithal and strategy to play the right cards at the right time to match the current goal in a revolving door of objectives, you can earn the crown and become ruler over the Fluxx kingdom.

There are currently over 30 different variations of the game Fluxx, each revolving around the idea of ever changing rules and goals. Fantasy Fluxx brings a new theme full of subtle (and not so subtle) winks and nudges to classic fantasy films and literature such as The Princess Bride, Lord of the Rings and Harry Potter. Of course a few wrinkles are thrown into the traditional Fluxx mix to keep things fresh and interesting.

To begin, players are dealt 3 cards and have only 2 rules to abide by: Draw a Card and Play a Card… nothing more… nothing less. Fluxx isn’t necessarily about the objectives, but rather the cards that will eventually lead to those objectives. The ultimate goal of Fluxx is to be the first player to meet a current goal – typically requiring a specific set of cards. Unfortunately, the goals and cards available are in constant (ahem) fluxx.

Over the course of play, adventurers will come across a series of cards, all with unique effects to twist and contort the game play. These card varieties include New Rules, Keepers, Goals and Actions.

New Rules are simply that, new rules that when played are now implemented into the game. A New Rule might require you draw 2 cards instead of 1 or limit the number of cards you can hold in your hand at the end of a turn. Once played, these rules immediately go into effect.

Keeper Cards are the tools necessary to meet certain goals. You may find a Humble Young Hero, a Gallant Swordsman or a Magical Ring. Keeper cards must be played in front of you to take effect. Be warned: placing keeper cards in front for the entire world to see could potentially expose them to unforeseen dangers including theft, discarding and more.

Goal Cards are used to define the current objective of the game. Players may change the current goal at any time by playing one of these cards on their turn. Goal Cards might require you to gather a number of specific keeper cards. These can change frequently throughout the game, always keeping players on their toes.

Action Cards will give the card wielder a unique ability to influence the game. An action card allows you to throw a monkey-wrench in the game by exchanging a certain number or type of cards or flat out discarding cards from the game amongst other things.

Fantasy Fluxx also introduces a few new hiccups such as Creeper Cards. Once drawn, they will immediately be placed in front of the player, attached to a Keeper if available. These cards can be good or bad news depending on the current goal, but will almost always keep you from winning in a traditional sense. When attached to a Keeper, the Creeper renders that card unplayable. Players will need to find ways to discard or create an opportunity to make these Creepers beneficial. In addition to the Creepers, you’ll also find Surprise Cards that can be used at any time to negate another player’s action.

Finally, the game introduces the Invisibility ability. Playing certain magic cards can turn a players Keepers invisible and impermeable to your opponents attempt to steal or spoil them.

Throughout the game, cards and rules will change. Games can be won by carefully crafting a strategy and gathering together a sequence of cards assuring yourself victory or in some cases, just plain luck. The one thing you can be sure of when playing Fantasy Fluxx is the game will always be changing and will never be the same.

Fantasy Fluxx is essentially a deck of 100 cards. The card quality is decent and the illustrations are fine – nothing spectacular, but it gets the job done.

My first thought after playing Fantasy Fluxx was: Players who enjoy a firm foundation of objectives and goals need not apply. Fantasy Fluxx is a constant earthquake of moving parts. It’s not up to you to tame it, but ultimately endure it until it’s time to strike. I have to admit I often felt like I was blindly playing cards with no direction. But as the game progresses, new rules are put into place that allow you to strategize and organize your hand.

The action cards allow you to carefully readjust the games landscape in a variety of ways. An action card that allows you exchange cards can put you in the driver’s seat. Of course other action cards create chaos such as forcing everyone in the game to discard their hand and basically start over.

While there is strategy to the game, most points of success stem from some form of luck. Drawing the right card at the right time is often unforeseen and unpredictable. Even drawing a card to help manage your own strategy can still be attributed to the luck of the draw. This creates a very swing-y environment. One minutes you’re a turn or two from victory… the next you’re back at square one.

There is a healthy amount of interaction in Fluxx. Players will intentionally and unintentionally be affecting one another throughout the game. Changing a goal can send all players scrambling for a new approach. Adding a new rule could savagely disrupt a carefully planned play… but it’s all in the spirit of the game.

I”m not sure if it’s normal, but I frequently shot myself in the foot. Playing the wrong goal at the wrong time leads to easy victory for an opponent or discovering a previously discarded Keeper would have led to victory a turn later.

• Fantasy Fluxx will never be the same twice

• The concept of ever evolving rules and goals makes this intriguing

• The humorous take on the theme is fun

• While it’s kinda the point, this is a very swing-y game

• Luck plays a heavy role in the outcome

This was my first foray into the Fluxx universe. I’ve heard about it for years and just when I was ready to take the dive and pick up a copy, I would always get cold feet. I’m glad that I finally got to experience it. The game is a really unique experience. The changing rules give you the feeling that victory (or defeat) might be right around the corner. In my initial games, it felt like an exercise in attrition. If I can just hang around long enough I’ll be able to put together the perfect hand to steal the victory. I also found the game full of highs and lows. You’re often so close to victory only to have the rug pulled out from under you. While a more refined strategy might grow out of additional plays, it’s very clear this is a game where luck plays a hand of its own. But for some gamers that translates to everyone has a chance at victory.

I did enjoy the silly take on the theme – giving homage here and there to the titans of contemporary fantasy. While I don’t think the theme will necessarily make or break a game like this for you, it won’t hurt if you’re already a fan of fantasy.

If you’re looking for a silly, quick and easy-to-learn card game that’s playable for kids of all ages. AND… if the swing-y, luck-heavy nature of the game doesn’t scare you off… you should definitely give Fantasy Fluxx a look.