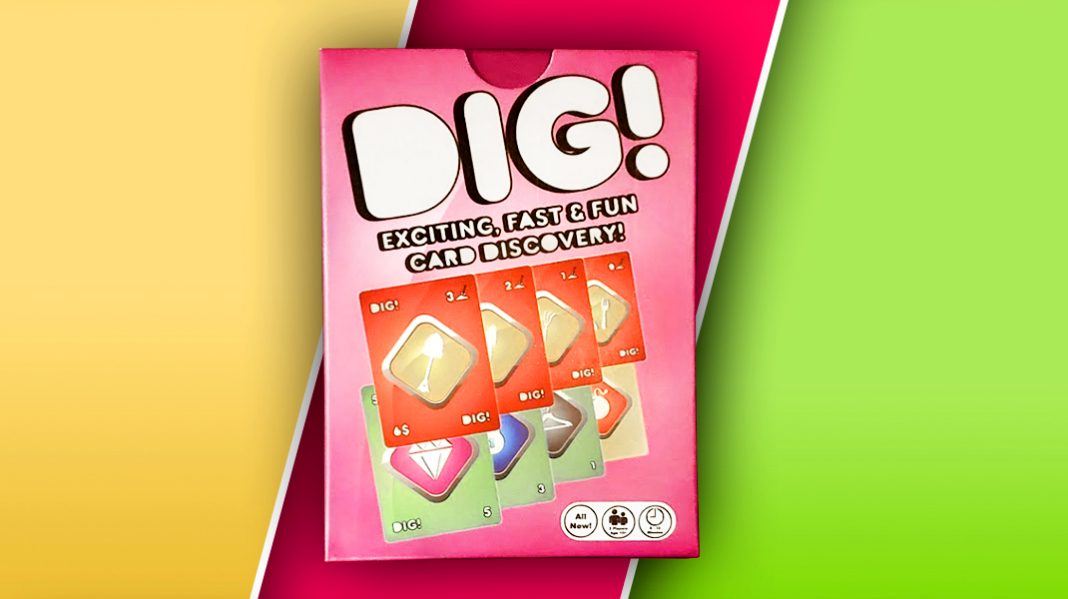 Who Knew That Bombs And Shovels Don’t Mix??

So I recently played DIG! from Syther Gaming, designed by Rob McBride, and had a blast! Literally, haha. Blast is a fast 2 player game (5 to 10 minutes) that plays 12 and up where players are trying to dig up more treasure than their opponent without digging up a bomb and having to start their treasure pile all over again.  This will happen several times.

HOW DO YOU PLAY?

Each player starts with a basic tool (this can be upgraded), then the 36 treasure cards and 8 bomb cards are shuffled and dealt into 11 piles of four cards each. Players take turns either checking the top card, or digging up 1, 2 or 3 cards according to the ability of their current tool.

Each player takes a turn peaking at the top card of a pile or digging up cards according to their current tool until a bomb is dug up. The player who digs up a bomb immediately ends their turn and loses all treasure cards that have currently been dug up. Do not get attached to your pile of treasure in the beginning, you are not likely to keep it.

Once all the piles are empty the game is over and whoever has the most points from their discovered treasure pile is the winner!

Do not underestimate the value in being able to peak. Once you upgrade your tool you can no longer peak, you can only dig up cards, meaning you are pressing your luck. The bigger tools let you dig up more treasure at once, but with that comes an increased chance that the next time you put your shovel in the ground you could end up looking like Wile E. Coyote and lose your current fortune.

You can go the whole game without upgrading your tool (I did win like this) but you will only be able to pick up cards the second time you peak at them, one at a time.

You can also have games where you tie because of unlucky placement of bombs at the bottom of different piles, which happened to me several times. It was still fun like this because it was funny for us both to be blown up at the end of the game despite all our machinations and calculations.

WHAT DID I THINK OF IT?

I liked it a lot. This is a fast, easy pick up game. There is plenty of replay value because you never know where the bombs will be buried in the various piles. Further, you can vary the amount of cards or stacks you bury all the treasure and bombs in.

I tried the variation suggested in the rules of dealing everything in 4 stacks of 11 cards and this strategy turned out to be very advantageous for sticking with the first tool for the whole game.  This does play well for players who are more ambitious in their digging (you all know I am not the best at pushing my luck) which could have blown up in my face. See what I did there? Bombs… blowing up in… never mind. Comedy gold.

I was a little confused when upgrading my digging tool. The rules say you have to pay treasure out of your discovered pile (the pile you have that has not been blown to smithereens yet) but does not specify if you may pay the cost with the top cards or any card(s) of your choice from the pile. You do not get change back, so if your value(s) listed over pay then you are just being generous. We played using the card(s) of our choice from the pile.

I was frustrated when I first started playing because I was looking for some way to lock or safeguard my amassed treasure. Bombed out of luck there. I thought at first there should be some sort of mechanic to do that by skipping a dig phase or something, but after playing a number of games I retracted that thought.

If you are worried about blowing up then draw less cards. You will not gather points as quickly, but diminish the odds of detonation. Just because your current tool lets you delve 2 or 3 cards down does not mean you are required to do so.

Oddly enough, I found I favored a less aggressive strategy with this game. I know, sacrilege compared to my usual style you all know me for. I found the peak and dig strategy, where slower, could set up my opponent for a bomb and not mandate self detonation. The trouble I ran into there was that my opponent copped wise to me after a round of that and played the same strategy in return. That became a game of attrition and became a much more calculated game very quickly.

The game is a fast play, even if you are calculated in your approach. If you both get super serious (red versus green wire… serious business) the game will still be less than 20 minutes. This is a great family game, even being a 2 player game. You could easily turn this into a tournament for the family. This game is the bomb, haha, and I give it 7.5 bombs out of 10, BOOM!