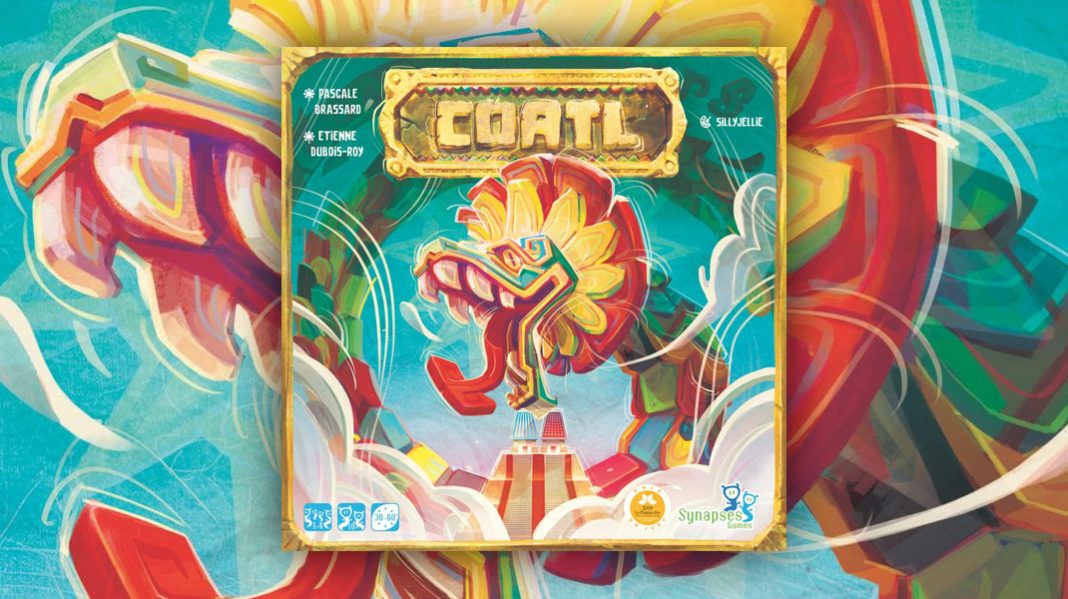 The time has arrived to appoint a new Aztec High Priest and they’re taking applications. To prove you’ve got the stuff you’ll compete in a prestigious tournament to impress the gods. In this tournament, each potential high priest must carve the most intricate and elegant Cóatl sculpture. In Aztec culture, the Cóatl offers fertility, abundance and riches, but always with one condition: tireless work. Sculpt the greatest Cóatl and earn the title of high priest.

In this abstract game, you’ll work to manage your hand of objectives, pursue contracts, earn points by working to complete patterns and gather specific pieces (head, body and tails) as you build your own Cóatl. Players earn points by attributing objective cards to completed Cóatl sculptures. The game ends when a player has completed (head to tail) 3 Cóatl sculptures.

Cóatl is an impressive looking game. The production quality, game pieces and artwork is very thematic and engaging. That being said, my initial pass began to make me wonder if this was meant more for a younger audience. Would there be enough meat on its bones? I’ll go into this more briefly, but I can confidently say that despite that initial impression, Cóatl has a richer, more competitive side that contributes to an overall, fun and challenging experience for gamers of all ages.

The goal of Cóatl is to score the highest point total attributed to your completed Cóatl sculptures. While the end game is triggered after a player completes their 3rd sculpture, that doesn’t necessarily guarantee that player a win.

During the game players will have multiple opportunities to score points by achieving Prophecy Cards and Temple Cards. These cards all feature different conditions and goals.

On a typical turn, a player will be able to take 1 of 3 possible actions: Take a Cóatl Piece, Choose Prophecy Cards and Assemble Your Cóatl.

In the middle of the table sits the supply board. This is where players will select pieces to later build their sculpture. The board is broken up into sections players can select from. A player might take a head, a tail or a pair of body sections. Each section comes in 1 of 5 colors.

The second option would be to choose a Prophecy Card from a community pool. Each Prophecy Card features a specific combination or pattern objective. For example, one Prophecy card might require you to have 3 sculpture pieces in a row in a combination of black/green/black. Achieving that card may give you 2 points, but many Prophecy Cards give bigger scores to multiple pattern instances. So, possibly building out the black/green/black combo 3 times in one sculpture could net you 7 points instead of 2. You can draw as many Prophecy Cards from the pool as are available given you end your turn with only 5 in your hand.

The third option to take on your turn is assembling your Cóatl. During this action you can begin a new Cóatl, add to an existing Cóatl or Fulfill a Prophecy Card by placing it next to a Cóatl sculpture. These can be done in any order and as many times as you have means. A sculpture can score a maximum or 4 Prophecy Cards and once a sculpture is complete, no additional cards may be attached to it. Any incomplete Cóatl sculptures are not scored at the end of the game.

In addition to scoring Prophecy Cards, players also have one Temple Card which serves as an end game goal. These Temple Cards act similarly to Prophecy Cards, but can be applied to multiple sculptures (such as gaining 11 pieces in a Cóatl or having an equal number of 2 different colors). Along with your own Temple Card you receive at the beginning of the game, there are also 2 face up Temple Card goals on the table any player can target. Once they’re achieved a player can steal them from the table.

Players will take turns performing actions and building their sculptures until one player finishes their 3rd sculpture. After that, players will have one additional action. Each player then scores their Prophecy and Temple Cards. The player with the most points is the winner and earns the title of next Aztec High Priest.

As far as components go, Cóatl has some real positives here. The Prophecy and Temple Cards feel amazing. These are super-high end quality cards. They feel great in your hand and the texture is visible in almost any light. I’m a big fan. The central game board is well done. The reserve supply of each sculpture piece is stored in individual bags. These bags look and feel great. I love digging in the bag to refill the supply board. Each individual sculpture piece is also well crafted and sturdy. The only glaring negative for me are the individual Player Boards. While these basically serve as a place to store unused sculpture pieces, they are pretty thin and I worry they could get wrinkled or bent. All-in-all, Cóalt scores big in the components category.

The artwork in Cóatl has a lot going for it. Overall it’s colorful and fun. As I previously mentioned, it may be a little too fun and give the wrong impression to players thinking this a light, family weight game. When you give the cards a more closer look – especially the Prophecy Cards – you’ll see some are a little more dark and scary in theme. The player boards are all beautifully illustrated and presented. The graphic design and communication elements of the cards is all really well done. Prophecy Cards clearly state their scoring combinations in multiple spots to make them easy to read while holding them in your hand. In the end, Cóatl is a beautiful game where the artwork really contributes to the enjoyment of the gameplay.

While Cóatl could be categorized as a gateway/family-style game, there is really a lot more going on here giving it plenty of depth. On the surface, it could have potentially been a clone of the classic kid’s game Cootie. Fortunately, the game’s designers had a much more subtle, challenging game in mind.

At its heart, Cóatl for me, is a game of efficiency where you’re always racing to maximize your game plan and strategy. As the game builds, the anxiety builds. This is one of those good anxiety situations. There are so many ways to approach building your Cóatl and fulfilling cards, but as you get closer to the end, tension builds as you race to fulfill your point goals.

There is a little bit of the luck of the draw in regards to the Prophecy and Temple Cards, but I’ve found there to be plenty of time to shuffle out bad goals, develop a plan and gather the necessary pieces to get your sculptures moving forward.

With any drafting game, there’s always the possibility to draft defensively, but that can derail your own goals since most of the Prophecy Cards are very specific.

I really enjoyed attempting to not only tie 4 Prophecy Cards together in one sculpture, but potentially score multiple times on each card. Of course, it’s nearly impossible to max out each card, but multiplying your scoring opportunities seems like a key strategy in my limited plays. On top of that, you’re also working to score your own Temple Card AND possibly score one of the face-up Temple Cards on the board. This can all lead to some serious brain-burning turns.

Hopefully I’ve clearly communicated that Cóatl has some nice depth and decision making to it. On the flip side, the game’s mechanics are fairly simple making this highly playable in a family setting. The big, bold colorful cards and pieces will quickly draw in younger players.

Cóatl has been a big hit for me. I’m a fan of its bright and colorful table presence as well as its unique take on set collection. This is much deeper than I was expecting, but I was also happy to see it’s something my younger kids could grasp and play. I love the tension in the game – especially as you move closer to the end and see other players starting to finish out their last Cóatl. From there it seems like a mad-dash to wrap up your Prophecy Cards and decide if you want to push-your-luck and gain just a few more points. Being efficient pays off big time and wasted turns can really mess with your planning. There isn’t a ton of player interaction, but as with any drafting game, choosing certain pieces can equally benefit and harm another player’s plans. That and just seeing your opponent’s success on the table can be a real motivator. I haven’t mentioned it up to this point, but the theme is also integrated well here. Cóatl is certainly one I would recommend for someone looking for a fun, think-y and flexible family-style game that is easy to set up and plays under an hour.