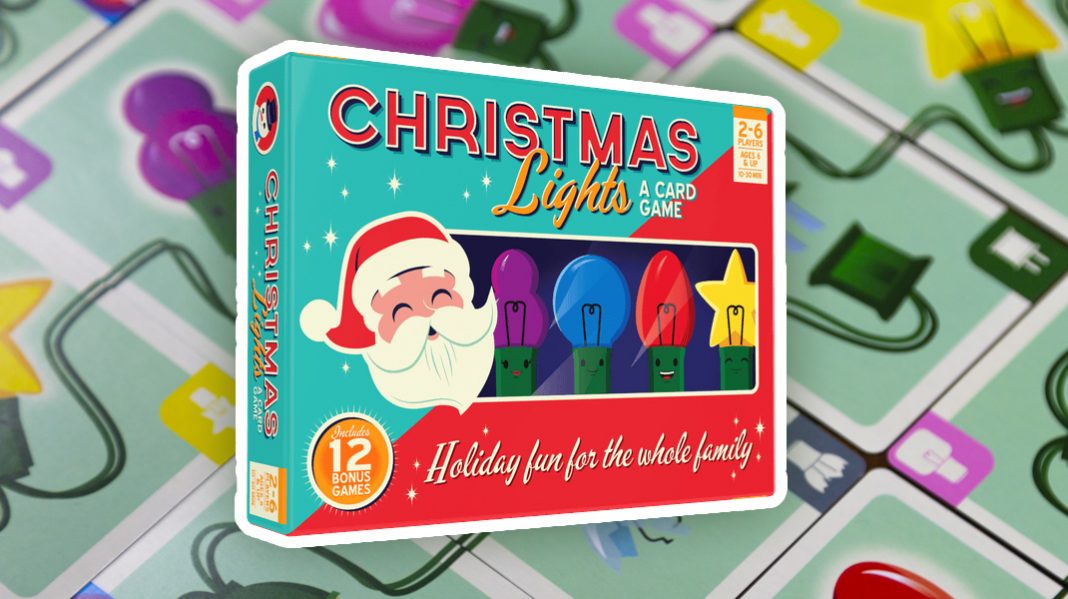 Christmas Lights is a competitive card game pitting players against one another as they work to replace broken bulbs and untangle light strings in preparation to decorate for the season.

During the game, players will trade and share hands of different colored light cards as they pursue Christmas light pattern objectives. There is a catch: Players won’t be able to see their own hand challenging their craftiness and memory skills.

To begin the game, players will receive 5 Bulb Cards. These Bulb Cards must be placed in your hand, but facing away so they’re not visible to the holder. Players will also receive 2 Pattern Cards that serve as the objectives for the player to complete. Finally, players will draw a Christmas Character card. The player who draws Santa gets to go first.

On your turn you will be able to do up to 4 actions in order. Players will be able to play a card or two, swap a card with an opponents, sell 1 or 2 cards from your hand or refill your hand. If you skip an action you can’t go back and complete an earlier action.

When playing a card from your hand you must play them one at a time and they must be in the order they appear on one of your hidden pattern objectives. There are exceptions that will allow you play cards that will serve as place holders or wildcards that serve as any color.

Swapping a card allows the player to select a card from their hand and trade it with another player’s hand. This trade can’t be objected to and each player is allowed to view their new card.

When selling a card, a player places 1 or 2 cards face up on the table. The player will offer to “sell” these cards to any player in exchange for answering a yes or no question about the cards in their own hand. The question must be answered truthfully and if the player receives no takers, the cards must be discarded.

Finally, players refile their hand up to 5 cards.

Along with the Broken Bulb cards, players may receive Bubble Bulbs that serve as wildcards. Playing a Bubble Bulb will require the player to draw an Event Card. Event Cards have a variety of positive and negative outcomes that can potentially affect every player.

Play continues until one player has completed both of their hidden pattern cards. They are the Christmas Lights champion.

This is a simple card game with fun, festive (yet not mind-blowing) card illustrations. Components and artwork are sufficient.

Christmas Lights: A Card Game is the type of game that works really well around the Christmas season. I don’t own any other Christmas themed games and this is one that’s easy to teach and play when relatives or friends stop by. That being said, it’s probably not going to get much play before or after the holidays. That doesn’t mean it’s bad, it just means it serves it’s purpose.

Holding your hand of cards away from you instantly reminded me of the classic card game, Hanabi. Not knowing your hand brings an unease to any player. This is not how card games are suppose to be played! But with that comes a sense of excitement and newness. The process of identifying your hand can be fun or plain tedious. There is a strong bit of luck initially as you’re forced to part with unknown cards in trades in hopes of improving your situation while keeping your opponents at bay.

This may turn some people off, but like Hanabi, you’re going to have to use the long lost art of brain memory. The rules do allow you to rotate or hold your cards in a way that will hep you remember, but it’s still your memory that will get the last laugh.

The broken and bubble bulb cards provide some variation to the game and, if used properly, can give you a decent boost.

This isn’t just a game of luck. In the handful of games we played as a family, the player who more skillfully navigated their hands typically won the game. That was encouraging, especially starting the game blind with a handful of cards and essentially no clue.

The game also features rules for a ton of bonus games based on more traditional card games. This is a nice touch since the heart of the game is the Christmas theme. Playing other games with Christmas themed cards will only give the game more length and life.

• I love the theme and idea behind the game

• The game is super easy to setup, teach and play

• This will not only appeal to a wide audience, but also introduce them to the mechanic of a blind hand – which is fun

• While there is some strategy, there isn’t a ton of depth

• Visually, this game won’t amaze anyone

Christmas Lights: A Card Game is a nice, little game that works well during Christmas time. It’s quick to play and easy to learn making it accessible. It’s the kind of game you’ll likely only break out during the holidays when family or friends who aren’t huge gamers come to visit… so it does fill a void for me. The additional bonus games give the game longer legs and should make it more appealing. If you’re looking for a fun, light, Christmas themed card game, you should definitely take a look at Christmas Lights: A Card Game.