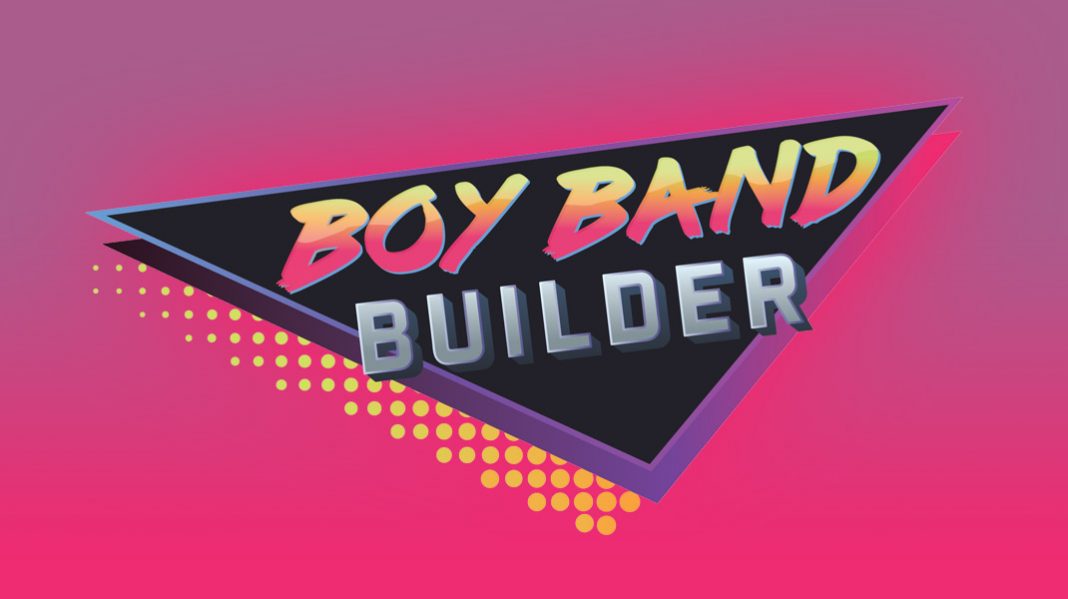 Prepare to step into the board game time machine and travel back… way back… about 2 decades or so when mere boys would captivate the entertainment landscape of a nation. Groups of “boys” were banded together and labeled musical acts by savvy marketing executives in an effort to squeeze allowance money from bratty tweenage girls. What followed could never have been predicted: an onslaught of hair gel, choreographed dance moves, ripped abs and blended, harmonic love ballads and catchy, pop-beats that would consume the world. These boys would be nothing apart, but together… in the group… they were a force to be reckoned with. Looking back, witnesses can only gawk in horror at what they experienced… if it wasn’t for the buttery-smooth bite of nostalgia taking us back to a time of innocence and ignorance… a time of baggy jeans and TRL… back to the glory years when the boy band was king.

In Boy Band Builder: The Card Game, players take on the role of music managers looking to put together the ultimate boy-band. Collect sets of boy banders like baseball cards, using their unique skills to book huge venues, tackle the biggest gigs and make bank to cover all the finer things in life.

Boy Band Builder brings a relatively simple set of rules to the table. During a player’s turn, they may do 2 actions from a menu of options. You might choose to audition new band members, draw star cards, play star cards or do a gig.

Every action works to make your boy band bigger, badder, more famous and richer than any 16-year-old kid should ever be.

Each potential boy band member carries their own unique set of skills and a cost. They may be talented with the Pipes (vocals), Moves (dancing), Heat (hotness) or Cool (attitude). Star Cards can be used to purchase new members or “upgrade” your current members – bringing more and greater skills to their repertoire. The Star Cards also provide a bit more gamification as they occasionally allow you to toy with other bands and their management making their quest for stardom a little bit more challenging.

A community of gigs sit in the middle of the table and they may be activated when a certain set and combinations of boy bands skills have been achieved. Each gig comes with a certain monetary amount with the more illustrious gigs requiring more challenging sets to obtain.

The game ends when a number of gigs equivalent to the player count have been met. At that point players total their cash earned and one group is declared the winner.

Boy Band Builder: The Card Game is just that… a card game. It features a total of 100 unique cards. The card quality is glossy and bright and it does a fine job for the purpose it sets out to achieve.

The artwork on the other hand, is a bit of a disappointment. Band members specifically are a bit too simplistic. In a game that features “upgrades” such as acne cream and hot kicks, I feel the artwork could have been much more over the top. Providing a bit more personality could have really driven home the vibe of the entire game. For me it’s a missed opportunity, but I imagine the primary audience won’t be too deterred.

I think it’s safe to say, the lounge-in-cheek vibe intended by the designers isn’t lost here. While this is a game tugging at your nostalgic heart strings, it’s also equally poking fun at the absurdity surrounding the whole boy band circus. I think it’s that humor that earns this game it’s footing. I got a chuckle every time I applied “Male Pattern Baldness” to one on my opponents. Frosted Tips and Lawyer Dad were just 2 of many silly cards that show up through the game. Gigs are pretty standard, featuring tours and even a halftime show, but you can also gain notoriety (and money) by doing a mall tour or appearing on a teen magazine cover.

Mechanically, the game is a pretty simplistic engine builder/set collection system. You’re building and upgrading your band so you can audition better band members and achieve gigs. The gigs are never too far out of reach and the game goes by relatively quickly. I’m not saying it’s bad, there just wasn’t anything gripping about the mechanics. Upgrading your band seemed a little too easy and there were definitely a few cards in the deck that felt a little overpowered. All-in-all it felt more like a race that lent itself a bit too much to the luck of the draw, but I doubt the mechanics will truly turn anyone away interested in this game.

At the end of the day, while it is a legitimate game, I think its success will come from the gag gift crowd. As the nostalgia grows for bands like NSYNC and Backstreet Boys, 98 Degrees, Hanson, NKOTB, Take That, Dream Street, Bel Biv DeVoe, New Edition, BBMak, Boyz II Men… sorry, I lost my train of thought. I’m just saying, a gag gift like this would be perfect for that Boy Band fanatic in your life. It’s a nice bonus that the game has a good sense of humor about it and provides a decently fun gaming experience. Truthfully, I’ve seen and played games that offer much less on the shelf of Target and Walmart.

I wouldn’t necessarily recommend this for the serious gaming crowd (which you probably already picked up on), but I think there is some value here for the right audience. While Backstreet might not necessarily be back and this isn’t something you have to go buy, buy, buy – it is a humorous game that I enjoyed for what it is.

GoodGood Games is an indie publisher and you can get this game and support them by visiting their website at boybandbuilder.com.