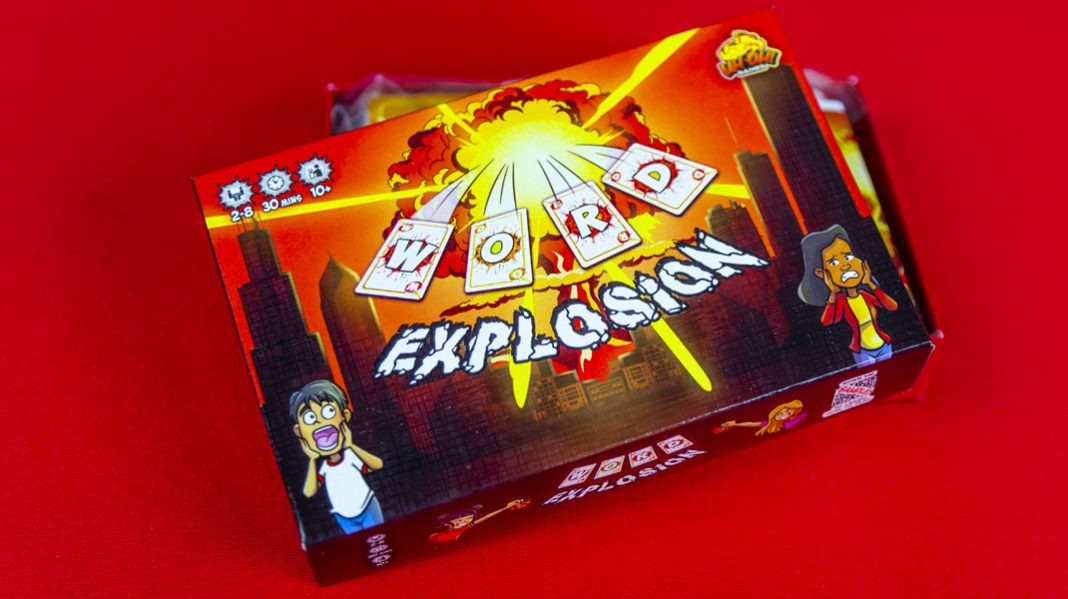 Word games have certainly solidified their niche in the gaming world over the years. You’re likely to find a copy of Scrabble, Boggle or Bananagrams in nearly anyone’s home. More recently we’ve seen the success of games like Letter Jam, Paperback and Letter Press seek to enter the ranks by bringing more modern twists. Word Explosion is the latest entry seeking to put a new spin on the age-old study of orthography by infusing a party-like approach by challenging players with quick card play and an ever-shifting landscape forcing you to stay on your toes . Let’s take a look at how it plays and will be a great fit in your gaming library.

Word Explosion is a game where you string together letters both alphabetically and by spelling words in an almost UNO like fashion to whittle down your hand of cards. Rest assured there is more going on here than a generic game of UNO, but I think the comparison is fair because just when you got your process in place someone throws out a Wild Draw 4 and completely uproots your plans.

I’m not much of a speller. I rely on spell checkers to keep me from looking like an idiot most days. I’m up for a game of Bananagrams on occasion, but I use it as an opportunity to boost my wife’s ego. She is the word game savant with her quick-thinking, word-conjuring magic. So I invited her to participate. I fully expected to be annihilated, but I also expected to get a genuine impression from a bonafide word-crafting ringer.

Each player begins the game with a hand of 10 cards. The game’s 120 card deck features an assortment of letter characters you’ll attempt to string together in various ways in an effort to be the first to completely discard your hand. On any given turn, players will have the opportunity to play a letter card matching the previous letter card played, play the next letter in the alphabet or spell a word with your hand that starts with the previously played letter.

Word Explosion is not your standard word-playing game.

In addition to the game’s letter cards, there are a number of action cards bent on wrecking this safe, casual word-playing experience.

There are a number of different action cards that change the flow of the game, but the one that got the biggest reaction was the ability to reverse gameplay. This isn’t just going from clockwise to counter-clockwise, but you’re also required to play the alphabet in reverse and spell words backwards. An S now follows a T and words must END with the previously played card instead of beginning. This might seem fairly pedestrian, but if you’ve ever tried to recite the alphabet backwards you know this can be a mind altering experience. Go ahead and try it right now… I’ll wait. Thankfully the game provides a simple reference sheet with the English language alphabet. Almost absurdly silly to include in most cases, this “reference” card from pre-school will be your saving grace.

The Time Bomb cards seek to drive home the “explosive” nature of the game. These panic-inducing cards allow you to choose a player (likely your arch nemesis at the table) and force them to complete their next 3 turns within 15 seconds each or draw 3 additional cards. In our games, this was accompanied by everyone at the table audibly counting down the 15 seconds in unison… nothing like putting the pressure on you.

Additional cards might force a player to discard their hand and redraw 8 new cards or swap their hand with another’s. Thankfully there are some blank cards that serve as wild cards as well as “NUH-UH” cards that can deny another player’s attempt to dump on you with one of their own action cards.

Finally, there are the UH-OH! cards. These cards allow you to force a player to draw the top card from the deck and spell a word (forwards or backwards depending on the current setting)… and if they can’t they draw more cards.

Again, play continues until one play has completely exhausted their entire hand.

The extent of Word Explosion’s components is a deck of 120 cards. My copy was a prototype (albeit a fairly complete looking production) so I can’t speak to the final quality, but the cards were a good quality and I had zero complaints.

The artwork is minimal. The action cards have cartoony individuals and your typical letter card has a cartoony explosion in the background. The artwork is light-hearted and silly and brings just the right amount of broad appeal to a game like this.

GENERAL THOUGHTS ON THE GAME

As you can see, Word Explosion is a word-game that delights in putting non-spellers in the pressure cooker and baking them alive… But for my word-game-loving-wife… this is her element. She absolutely adored the quick play and interesting, unexpected twists that force you think on your feet.

In all truth, Word Explosion is more of a party game than Spelling Bee. I really appreciated that you don’t have to be a brilliant wordsmith to play Word Explosion. While being able to drop 5 or 6 letter words at any moment is incredibly beneficial, you’ll often find yourself with a fighting chance of spelling simple 3-letter words. In fact, the game is really geared toward playing shorter words. It’s the action cards that serve as your ace in the hole. Carefully timing these cards can give you the leverage and momentum you need to send you on to victory.

Because of the nature of the cards, there is quite a bit of take-that going on throughout the game and some of it can be pretty mean at times. Just like dropping a Wild Draw 4 on someone in a game of UNO who only has 1 card left to play… dealing with those mini-disappointments can be hard. I certainly realize this doesn’t appeal to everyone, but I stand by my motto of “if you can dish it out then you should be able to take it”… and I love dishing it out. The take-that element works to even the playing field and keep that spelling savant from running away with things… I found that refreshing. While I may never stand a chance at winning a game of Scrabble or Bananagrams, I still had a chance when it came to Word Explosion.

Overall, I do think Word Explosion is a success, bringing a new gamification to a simple letter-playing, word-spelling card game. It’s the action cards and their unpredictability that keeps you both on your toes and potentially in the game. I really enjoyed the twist where you’re forced to play cards in reverse. This seems simple, but it really messes with your reality and challenges you to constantly be engaged.

Yes, I did hate the Time Bomb forcing me to think outside of my comfort zone… but I loved playing the card and watching my opponents squirm for the next 3 rounds.

The game can go by quickly. We definitely had games go longer than 30 minutes, but that was mainly on the play group. So the 30 minute play time is pretty accurate.

Word Explosion is something the entire family can get into. Identifying the letters and spelling short words works great for the younger crowd, where quick-thinking and out-foxing your opponent with the action cards plays to any age group. Word Explosion isn’t going to turn me into a word-game lover, but it does provide plenty of twists and wrinkles to be a crowd pleaser. Going in, I expected my wife to love it (and she did), but I was surprisingly impressed. Once I was able to identify the strategy behind the cards, I always felt I had a chance. This is an easy win for the word-game loving crowd, but also one that brings a lot of fun and appeal to players of all types.