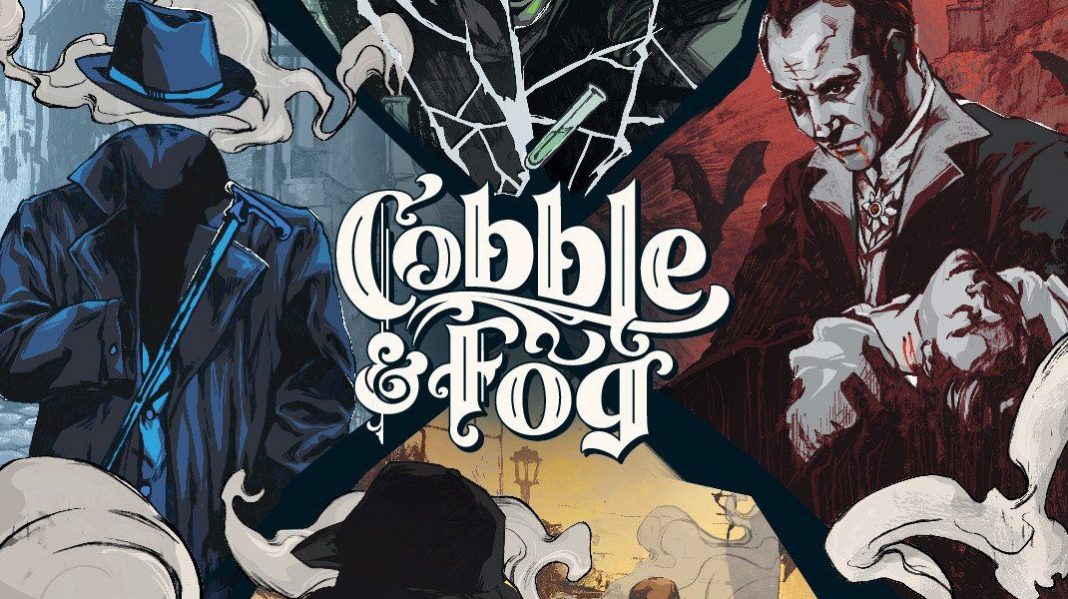 It was a cold, blustery night in old London town, as the mists descended upon Soho. Unseen in the night, terrors lurked seeking blood and vengeance. While the people slept, a battle raged on the streets and roofs of the city as two unlikely enemies sought blood in the mist…

Unmatched: Cobble & Fog is a head-to-head, duke-it-out fighting game using miniatures, a map, and a card deck for each character. Each game ranges from cat-and-mouse to boxing match as you move your character around the map, representing the streets of Soho or the mysterious Baskerville Manor, using your hand of cards to perform battle actions and settle the question: who would win in a fight between Dracula and Sherlock Holmes? The box brings to life four characters of classical literature that you never realized you wanted to see fight one another. But trust me, you do want to see them fight! Each player has abilities specific to their canon leading to fascinating match-ups between the variable powers. Sherlock Holmes could be using his deductive skills to track down Dracula (as Dr.  Watson shoots Drac in the back), or the Invisible Man could terrorize Dr. Jekyll until Mr. Hyde makes an appearance to beat the Invisible Man to death with a cane. A game could be as swift as Stephenson, as stimulating as Stoker, as dramatic as Doyle, or as mind-warping as Wells.

Each turn you have three possible actions, and you must take two, and can take the same action twice: 1) Draw a card, then you have a choice of whether or not to move according to your characters move points; 2) Attack! using an offensive card. Your opponent will then have the option to defend playing a defense card. There may be immediate, during, or after combat effects on the cards; 3) Scheme, which involves playing a card with some sort of instant effect that can help your character, hurt your opponents, or offer other advantages. Turns are short, sweet, and simple.

We have only played this game with two players, but it can be played with up to four players on the board. I can only imagine that would make for a tight battle until some players were eliminated. With only two players, there is plenty of room for some cat-and-mouse, but beware, if your deck runs out, you don’t reshuffle, you’re just out of cards for the rest of the game, and your character becomes exhausted and takes two damage every time you move, which will prove fatal!

Cobble & Fog offers four different characters and two different maps, making for at least 24 different combinations of two player games. Cobble and Fog is also cross-compatible with any other characters and maps from the Unmatched series leading to almost never ending possibilities of fights you never realized you wanted to see! (I wonder if Sherlock Holmes could beat down the raptors from Jurassic Park…Hmm…Deduction and dinosaurs, an unlikely combination—but Doyle did also write The Lost World, after all—no, not the Jurassic Park one, the old one.)

Games could range anywhere from a few minutes to an hour. The box says 20–40 minutes, but depending on the match up and what cards you draw, you could have a prolonged chase, a quick and dirty murder, or melee mayhem as classic characters crack skulls, fire revolvers, beat one another in fisticuffs, and suck your blood.

The miniatures are top notch and begging to be painted to bring the game to life. The cards are good quality, and the inserts hold everything very efficiently. It’s a great example of what a game insert ought to be. All the other components, like the dials and tokens representing companions to the heroes, are plain, but good quality. Some characters have helpers or sidekicks, such as Dr. Watson for Holmes and the Sisters for Dracula. Other characters don’t. If a sidekick has a health dial, then their health must be depleted before they are considered dead (Curse you, Dr. Watson!). If they lack a health dial, they have a health of one point and any damage incurred defeats them (So long, Sister!).

This is a card-based street fight, where what you draw can make or break you, which will annoy those who abhor having to deal with luck factors. This means that in some games one player will easily overpower the other, due to luck of the draw, although I do think most of the time things are actually pretty evenly-matched—instead of “unmatched”.

While we don’t have a good sense of whether or not all the characters are balanced overall, there were definitely combinations that made it seem as though one character was more powerful than another. The cards can give and withhold, after all.

Once again the Invisible Man had vanished into the foggy night. Dracula turns one way, then the other. His sister wives drew near comforting his heart. And then they cried out in undead horror as an unseen hand delivered a death blow to their beloved Dracula.

We love this game. It’s pretty quick. It’s never going to be the same twice. It’s tense; it’s silly; it’s friggin’ Sherlock Holmes fighting the Invisible Man! The art is fantastic, and the variable powers are interesting and fun. This is a relatively simple, yet super well thought out game (even if the balance between characters isn’t perfect) that offers a direct conflict, one-on-one fight experience like no other board game I have ever seen. We recommend this for a fun, quick, fight-to-the-death between your favorite characters from 18th century literature!