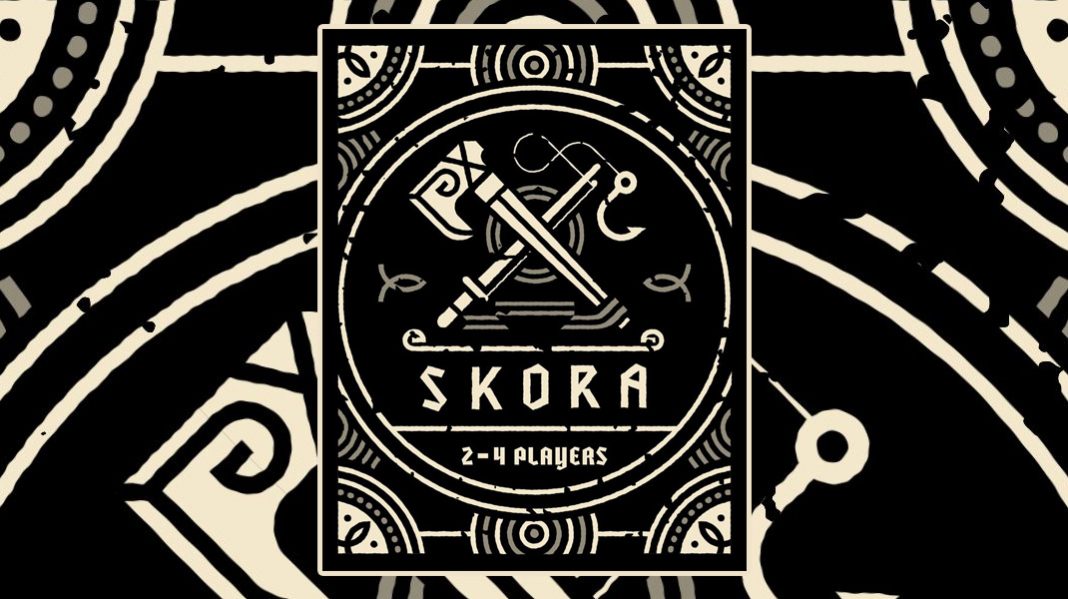 The winter has been hard for the inhabitants of the island of Norsica. As the season changes, the ice begins to thaw bringing back the regions live-giving sea creatures. In Skora, you’ll join one of the island’s feuding clans competing to meet their harvest needs. Fend off your opponents in hopes of landing the biggest and best fishing hauls.

Skora is a stylish, bidding and set collecting card game of fishing and feuding. Players will compete for the choice fishing spots by playing sea creature cards and placing ships. Earn axe tokens to fend off opponents. Finally, draft the placed cards to meet end game goals and earn points.

Each player begins the game with a set number of cards based on the player count. Each player also receives a Decree Card giving them a unique end game goal. A small board with 3 “oceans” sits in the center of the table.  One random card is played in each ocean space and the setup is complete.

The game takes place over 2 phases where players will play and then draft their placed cards.

The first phase, or Baiting Phase, starts by players taking turns playing their hand in one of the 3 ocean spots. Players can place these cards in any of the 3 ocean spaces. Cards each feature different actions that can affect the play. Some of the actions that can be triggered are moving cards to another ocean as well as placing anywhere from 1-3 ships in a particular ocean. These ships will serve as “turns” available to draft cards from that ocean in the later phase.

Playing cards in an ocean on top of one with the same symbol will earn axe tokens. These axe tokens will be used in the later phase to determine a draft order in case ships result in a tie.

Phase 2, or the Fishing Phase, begins the drafting phase of the game. Moving around the ocean board, one ocean at a time, players determine the “fishing” order and number of cards they can draft by the number of ships they placed in that specific ocean spot. Any ties are resolved and players take turns drafting cards.

Once the fishing phase is complete, players tally up their cards and any end game bonuses they earned. The player with the most points is declared the winner.

Skora really does everything right when it comes to the presentation. The game has some really cool tribal artwork throughout starting with the packaging. The box has a nice magnetized lip for easy access accented by a matte finish and spot gloss. The game cards are incredibly soft and smooth to the touch. The rest of the components are really well done as well. The ocean board, while small, looks and feels great. The different wooden ship tokens all feature unique colors and screen printed patterns. A completely unnecessary touch that gives additional value in my eyes and shows the care and attention to detail from the production team.

I was first attracted to Skora because of the fantastic artwork/ascetics – this is a GREAT looking game. As I read through the rulebook for the first time, I remember thinking: At it’s heard, this is an auction game – which further piqued my interest. While not an auction game in the traditional sense, leveraging your ships to draft the best cards was enough for me. I am a big fan of auction games, so I had high hopes.

Does Skora deliver? Yes and no. There is a decent amount of strategy in the game. Knowing when to play certain cards to give you and edge revealed the tug of war present in the Baiting Phase. I thought this was pretty cool. I enjoyed the balance between playing your ship cards and using the other cards in your hand to manipulate the ocean spots. This is definitely one of those games that, when you become well versed in the strategy, it turns into a game of wits with your opponents.

I expected the game to really ratchet up a notch from 2 to 4 players, but I never really felt that additional tension. I thought choosing where to play your ships might tighten up, but it never seemed to get there. Perhaps it was just the circumstances of those games, but with such a diverse set of end game goals, each player ended up seeking out their own scoring goals and staying out of each other’s hair for the most part. There was one game where too many ships were played in one ocean location leaving those players with wasted vessels and a pretty decent advantage to the rest of the group – so that was pretty cool.

The axe tokens are supposed to provide the battle element allowing you to fend off your opponents when you tie for position in a specific ocean spot. While we used them more on a couple games, they ultimately felt inconsequential.

• The artwork and components are fantastic

• Easy to setup… quick to play

• I wish there was a little more tension in the game

I do want to be clear that I enjoyed playing Skora. This is a quick game with a cool theme and there is an audience out there for that. The presentation was so good I think I had an over-the-top expectation. The game is fun and something I wouldn’t hesitate to break out and play with someone. I just don’t see if falling in the category of my go to card games. For me, it just doesn’t have the legs I wanted it to. I highly encourage you to check it out on your own if you’re looking for a quick, more manly-themed card game.