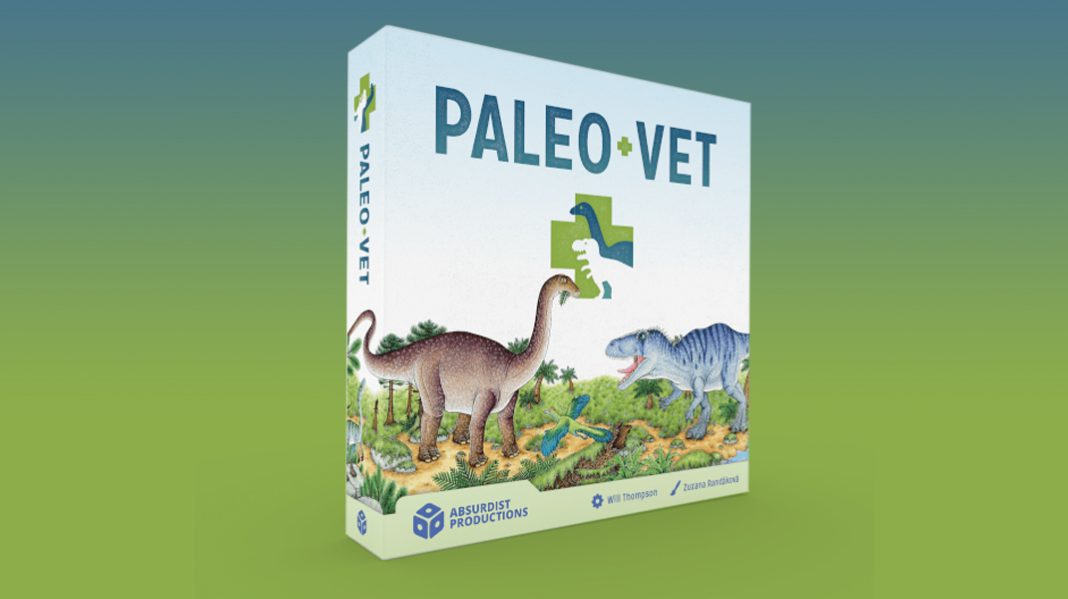 The ruins of [Definitely Not Jurassic Park, that would be a trademark violation] passed under us as the helicopter lifted up over the mountain. The remains of fences were strewn in a path making it clear that a creature of gargantuan stature had forced its way through. Up ahead we could see a clearing as the chopper moved forward…and there they were, a herd…herd?…of dinosaurs. We had heard of this, they told us this was what they were bringing us for, but so few had ever seen [not Jurassic Park] that it took our breath away. I heard one paleo-vet whisper, “They did it…They actually did it…” The chopper landed at base camp, and we stepped out of the copter.

In PaleoVet, the park is empty of people, but the dinosaurs are still on the island. They need someone to take care of them and protect the from modern parasites and diseases. Life may find a way, but it helps to have a good doctor on retainer. Paleovet is a dice game where you’ll use your rolls to cure those dinos and improve your hospital in order to get the most points at the end of the game from the dinosaurs you’ve been able to help.

The game has three modes: normal, casual, and light. In all modes you’ll split the dino deck evenly into 5 stacks of 10 cards each. In light mode, ignore all text and only match dice to the Dinos. In casual mode, the text on the dino cards is used in addition to dice. For the normal mode, split the upgrade deck into 5 stacks of 6 cards each, but the upgrades aren’t used in the casual or light modes. Each player receives 4 standard white dice and a player aid card. Once you’ve set up the decks and laid out the materials, you are ready to help those poor, helpless (except for their ability to kill you) dinosaurs.

This may sound odd, but the single best thing about this game is the incredibly helpful little player aid. Turns are separated into 6 phases, and you’ll go through all 6 phases on your turn before the next player goes. You can see the phases below. The turns are quick with good decisions to make!

The game says 2–4 players, but there is an obvious solo mode: Just play and try to beat your own score. The designer tells me he’s working on a solo mode for the final product. I think the solo mode will be a welcome addition, as I would definitely play this for a light game while watching Jurassic Park on a Saturday afternoon. I also think they could add components for 5–6 players. While that added game time might cause the game to wear out its welcome for a night, everyone would want to play it again soon.

The current box says the game is 10 minutes per player. We have played this in all modes and all player counts. The game is 45 minutes, period. Because of the way you go through the stacks of dinosaurs, it was 45 minutes every game, regardless of game mode or player count. It’s really fun, and it doesn’t overstay it’s welcome.

Variability primarily comes from shuffling the decks of dino and upgrade cards. It’s definitely “luck of the draw” in the sense of cards and dice rolls, but unless you play the “light mode”, you always feel like there is something you can do to help your strategy.

We played with a prototype copy, and the quality was good. The Z cubes are plain but get the job done. I don’t know what the card quality will be like, but the art on the cards is cute and cartoonish. The custom dice are really cool. Overall, good quality components all around, but you would want to sleeve the cards pretty quickly to preserve them.

While the base game is heading to Kickstarter soon, this game is ripe for expansions! Whether it’s just adding more dinosaur and upgrade cards or even adding a couple of mechanics, this game is begging for an expansion or two (and so am I!). And a little pterodactyl (named the game’s designer) told me that expansions are already on the radar as long as the Kickstarter succeeds.

The designers of this game have done us all a favor and already thought through scaling this down for our kids that are inevitably going to want to play a wonderfully illustrated dinosaur game that the adults were enjoying just fine by themselves. The “light” mode takes out all of the reading, so you’re just matching dice to dino cards, which oddly enough makes this the hardest mode since you can’t mitigate the dice in any way. The “casual” mode takes out the upgrade cards but the writing on each dino card is in play. The “normal” mode uses all of the text on the cards and adds in the upgrade cards. This is arguably the easiest mode since you can do quite a bit to manipulate the dice and guide your strategy. Many games don’t have different modes like this,  but we greatly appreciated it as we have two not-yet-readers and they were able to play the game and enjoy it, too!

The biggest negative is that I already want an expansion! We’ve played this game more than 10 times, but less than 20, and while we will still play it more with what we’ve got, we want more. Call it greed, call it gluttony, give us more! I don’t think that’s a negative, so much as a “We love it. Give us more! We’re greedy for more!”

And throw in 5–6 players while you’re at it. Even though it’s a 45 minute game, it doesn’t feel like a slog, and two more players would extend it to an hour. That hour would be fun and light, so I’m confident no one would feel tired of the game.

…”AAAAAHHHH!!!!” the blood curdling scream rang out as the T-Rex opened it’s eyes. The tranquilizer had worn off! The Rex rolled over and stood up as dino docs and assistants scattered in every direction. The Rex grabbed the nearby sedated Amargasaurus by the throat, and trailing blood behind, smashed through the wall back out onto the island. “Calm down, everyone, we’ve still a Triceratops to treat. Back to work! I need a splint and some dino-antibiotics over here!”

This is a really well thought out game that always felt fun and engaging, especially in the “Normal” game. Even though you’re rolling dice, there are great mitigation possibilities and combos that you can plan out based on what dinosaurs you bring into your hospital and what upgrades are available. Your strategy never has to be stuck in this game, which is really rare. This has the potential to be one of those games that you play with everyone: fun filler for hardcore gamers or when wanting a lighter game; use it to bring your non-gamer friends into the hobby; play with it your kids, even your non-reader kids! We really hope it does well in the Kickstarter! We’ll be backing it!

As a game to play with kids of any age (and still be interesting to the adults)! 10/10