Home Game Reviews Review: Out of this World 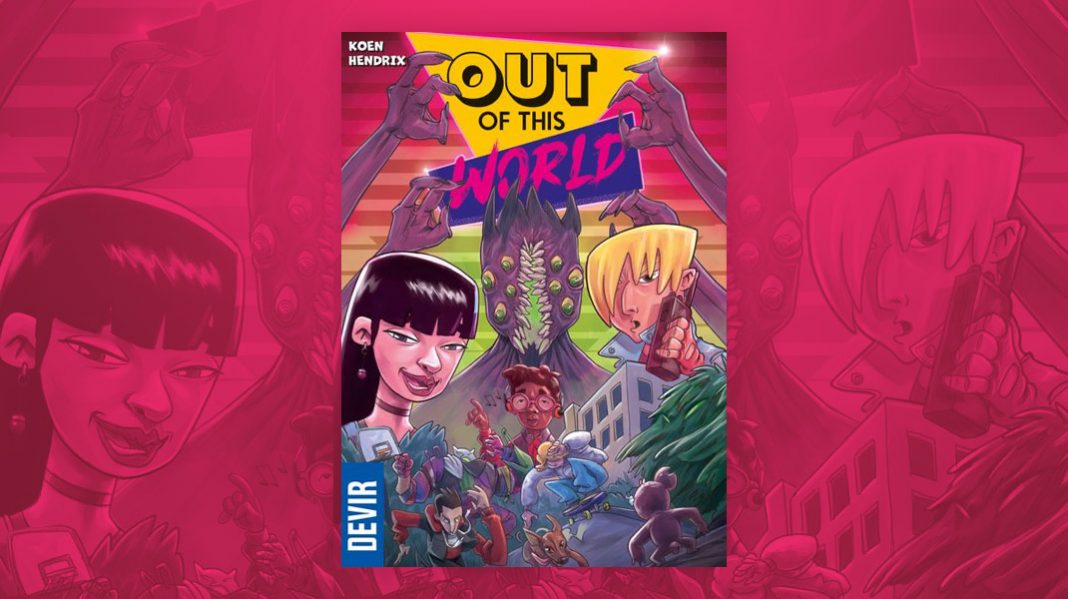 For the typical teenager living in the early 90’s, life is an uneventful mix of pizza, video games and grunge music. This was the case for you right up until you uncovered an interdimensional plot bent on releasing bizarre creatures in an effort to take over the world. It’s now up to you and your friends to put a stop to the madness using nothing but your courage, teamwork and anything else you can get your hands on.

Out of this World is a cooperative card game where players must work together with limited interaction to gather sets of cards in order to fend off creatures and meet community goals. Players will work together through a series of scenarios, each introducing a new story line, new creatures and tools to help you achieve your objectives.

Players begin by choosing one of the 10 early 90’s teen character cards. Each character features their own special ability that will either benefit themselves or another player throughout the game. You then choose an adventure card that will draw you into the story as well as declare any unique objects and special requirements for the setup.

Setup continues by shuffling the deck and dealing out 5 stacks of 4 cards each. The deck consists of a variety of objects/tools you’ll need to equip your heroes with as well as a number of foes determined by the current scenario you’re playing and your level of difficulty.

In addition to the deck of cards, the game features a time tracker with 8 time tokens. Throughout the game, as you’re unable to meet certain requirements, the group will lose time tokens. When the time tokens run out… It’s game over.

Each scenario consists of a series of rounds where players will draw and play cards in an effort to “equip” each player with a set number of points. In order to equip yourself with points, you must have a set of 3 cards that are either the same value or same card-type (identified by color and icon). A set of 3 cards with the same value will give you the points of one of the cards while a set of the same card-types will give you the value of the lowest-card. Some equipped cards provide you with repeating benefits while others might only provide a one-time use.

Foe cards will pop-up from time to time. If a player draws a foe card they must then work to collect the necessary cards to eliminate the foe.

On a players turn, they must take 1 card and may take 1 of a variety of actions. Players may pass a card to a friend by playing 2 cards and passing the lowest valued card on. Players may equip themselves, defeat a foe or spend an equipped card. You can also skip your turn entirely, but you must discard your hand to do so.

A scenario ends when all 5 card stacks have been depleted. In order to successfully accomplish your mission for that round, each player must have the correct number of equipped points. If the group hasn’t achieved that goal, you count the largest number of foes still in front of a player and remove that number of time tokens. If you reach the end of the 5th scenario with time tokens remaining you win the game.

Out of this World is essentially a deck of cards with a few additional components. The player cards and time tracker board are all slightly oversized and the time tokens are fun stop watched shaped pieces. The card quality is good and the artwork throughout is silly and fun, fitting the theme well.

This is essentially Stranger Things the game. The creature on the cover is even reminiscent of the tv show’s demogorgon. The odd-ball group of kids and the setting all draw comparisons. Is this a bad thing? Absolutely not! The early 90’s setting is full of fun, nostalgic elements and harkens back to a time where kids were a little more free to come into contact with interdimensional monsters. I’m a huge Stranger Things fan – so bring it on!

While this game could have been a simple, draw-and-play, set collecting card game, the creators introduce some interesting mechanics to help keep it fresh. The cooperative element is presented with a nice spin. Allowing only the current player to speak eliminates the potential for one player to take over the game. The limited communication also creates a new challenge in a game where players will often need to help their friends meet the scoring goals. This forces players to be aware of everyone at the table and consider their needs as well as their own. We played a more introductory-style of the game where we were all able to talk and it was much less challenging and engaging. On top of all that, it also provides a nice thematic touch in a time void of cell phones.

The legacy element, where players play through a series of scenarios is also a nice touch. As you play through the scenarios, the story is revealed and provides an additional level of immersion. Of course there is a variation of the game played outside of the scenarios, but the unique, episodic twists keep things interesting. The time tokens also create urgency as you work your way through the entire story.

The theme is also something I’d like to point out. The silly object cards such as a boom box, skateboard or your mother’s scented candles give the game a lot of personality. Your standard foe might be a garbage can or mailbox come to life while a scenario’s special boss-monsters are a bit more menacing and tough. There is just the right amount of silly-fun and danger I’d expect to find in a game like this.

Out of this World is a card game I really enjoyed. The theme and subject kept me throughly engaged. Gameplay was a challenge, but not so much that it was too complicated to teach to my younger kids. I liked how the cooperative element gave the power to the current player. Often in cooperative games, one player will take on the role of dictator (often me) and be the vocal leader of the game advising everyone on any and everything they can. Here the ultimate decision is left to the current player. Those decisions will affect the success of the entire group. This gives the game a more true, cooperative experience. The 5 adventure scenarios are enough to keep you coming back, but not too much where you’ll never find your way to the end. Games are about an hour, so you won’t be able to complete the entire story in one sitting. If you’re looking for a fun card game you can play with your middle/high school kids and the theme appeals to you – I would recommend Out of this World.