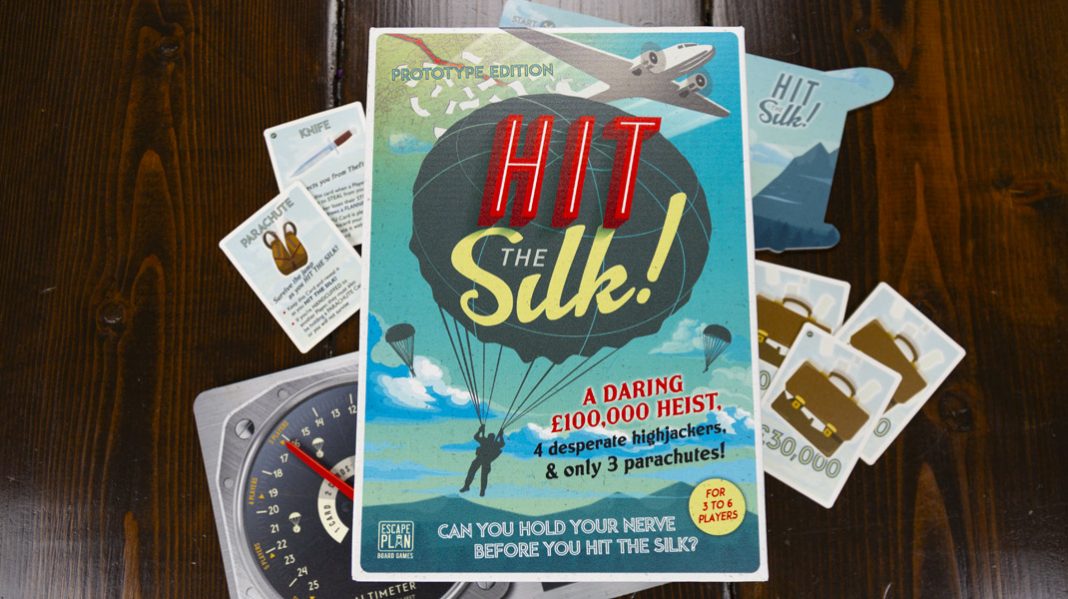 You’re in over your head with a casino owner and the only solution is to pull off a daring heist. Now you and your gang of criminals have hijacked a plane in order to escape and settle the debt. How could things get any worse? Suddenly, the plane’s engines begin to fail… and on top of that, there aren’t enough parachutes to go around! Can you stay alive long enough to snag a parachute and gather the funds necessary to pay off the casino boss before the plane goes down?

Slang for using a parachute, Hit the Silk will require players to form shaky alliances while flat-out throwing others under the bus as you play cards in an effort to meet the group’s goals. Time is of the essence as the plane loses altitude with each play in this social & strategic, hand-management party game.

In Hit the Silk, you’ll need to meet to objects: Survive the ascent and gather enough cash to pay the casino boss.

The groups cash object and starting altitude are defined by the player count. For example: a 5 player game will require surviving players to accumulate 130K in cash while beginning the game at 22,000 feet.

Players each start with 6 cards and will take turns executing a variety of actions in hopes of gaining an advantage over their fellow criminals. During a players turn they may do any or all of the following actions in any order they choose:

2. Take as many actions as your cards allow

3. Trade with another player (1 per turn)

Changing a card is essentially discarding a card and drawing a new one. In Hit the Silk, you’re often able to draw additional cards based on the altitude of the plane. As the plane gets closer to the ground, players may draw more cards in the exchange.

Cards are essentially your resources and tools you’ll use to gain your objects. Some will feature a varying amount of cash necessary for paying off the casino boss. Keeping this cash in your possession is critical to winning the game. Parachute cards are necessary to survive the jump as the plane goes down and handcuff cards may be used creatively to complicate or leverage someone’s path to victory.

The deck also has a variety of tools that can be used gain an advantage over your opponents/companions. Players might get their hands on a revolver, key to the handcuffs, a knife or a bottle of poison. Each tool has their benefits and limitations. Revolvers require bullets, poison can be negated by the antidote and knives can be kicked out a welding offenders hands. But they can also be a strong force to gain your opponents cards or eliminate them completely.

You’re also presented with a number of action cards such as spying on an opponents hand, stealing a players card or the ‘kung fu’ card effective in self defense.

Players may activate any number of cards in their hand by discarding them.

When trading, players are encouraged to be discreet and conceal their cards, leaving plenty of room for deception and double-cross.

In addition, players will often gain laundry cards when at the wrong end of an action. These cards carry no value other than to take spot of a more valuable card. They can be discarded later, but in the meantime, limit your effectiveness since your hand is maxed out at 6 cards.

As the game continues, playing (and not playing) certain cards will cause the plane to lose altitude. As the altitude decreases, players will be faced with a number of decisions. At multiple points, players will all collectively vote on whether or not to jump from the plane. If the majority isn’t quite ready, play continues. Once players vote to make the jump or are required to by the altimeter, the parachute wielding players leap from the plane hoping for success.

For the surviving group aboard the plane to be successful they must each have a parachute and possess a collective amount of cash equal or above the casino debt. There are plenty of opportunities for failure in the game such a the parachutists not having enough money, being killed somewhere along the way or being handcuffed to a player without a parachute.

What becomes of any surviving players unable to jump from the plane? They have the opportunity to play a mini game where they will attempt to land the plane by rolling dice.

Players successfully exiting the plane with the necessary amount of cash will together be declared victorious… unless the players left on the plane are successful AND have a larger sum of cash themselves!

The copy I reviewed was a prototype of the game and the components weren’t final. From what I can tell, the artwork is going to be solid. The uniquely cut player boards are very engaging. The way you rotate the dial on the altimeter is great fun and really contributes to the theme. All the art throughout has a fun vibe that gives the game a lighter feel. There is also a cool mini-plane token used by the losing players as they feverishly attempt to land the plane. I definitely look forward to seeing the final product.

Hit the Silk is social game of deal making, back-stabbing and luck. Every game I played was full of lively conversation and laughs.

What Hit the Silk does right is immediately engaging you in the theme. The stakes are high and you’re right in the middle of the action. In addition, the player board looks fantastic and function great. Rotating the altimeter dial really contributes to the theme and builds urgency through play.

I do get the feeling the gameplay will vary quite a bit based on the number of players as well as type of players at the table. I found there to be 2 distinct types of players in our games: the one tentative to ruffle the feathers of anyone, often relying on the luck of the draw to garner the right hand… and the aggressive player, not afraid to engage in a take-that style of game. We certainly enjoyed the more aggressive approach as it created more tension and swings in our storyline. It also led to alliances as well as questionable trades that felt right at home in the company of a bunch of criminals facing potential death.

The action cards were a little hit-and-miss for me. Obviously, more kung fu, handcuffs, poison and knife fights equals a more wild, memorable experience. But I found it difficult to pair certain cards together when needed. We did use the handcuffs and keys often. Playing these cards created a musical chair parade of handcuffs and parachutes dancing from one player to another. But collecting both the revolver and the necessary bullets just never happened and stealing and spying were never as frequent as I wanted them to be.

One thing to point out, is this game works with 3 or 4 players, but it really rises up with a higher player count. More players involved creates a greater value on the parachutes and forces everyone to maximize their resources. The larger player count will place more emphasis on making each turn count.

Funny as it seems, players were often content to stay aboard the plane and attempt to land it – especially if they possessed the pilot license card. Everyone just wanted to roll the dice and play the fun “land-the-plane” mini game. Maybe it’s too fun?

Hit the Silk is a social card game with a strong theme. It really works as a twist on your standard party game. While it is slightly more involved than your typical party game, the story and easy rules make this an enticing play with friends. You won’t get as much enjoyment out of this game unless you’re willing to jump in and create a little trouble for everyone else at the table. This is where the game can become divisive. If you don’t like a good take-that game, Hit the Silk probably isn’t for you. If you are willing to stick it to someone all in good fun as well as like the idea of a more socially engaging game, you should give Hit the Silk a look.