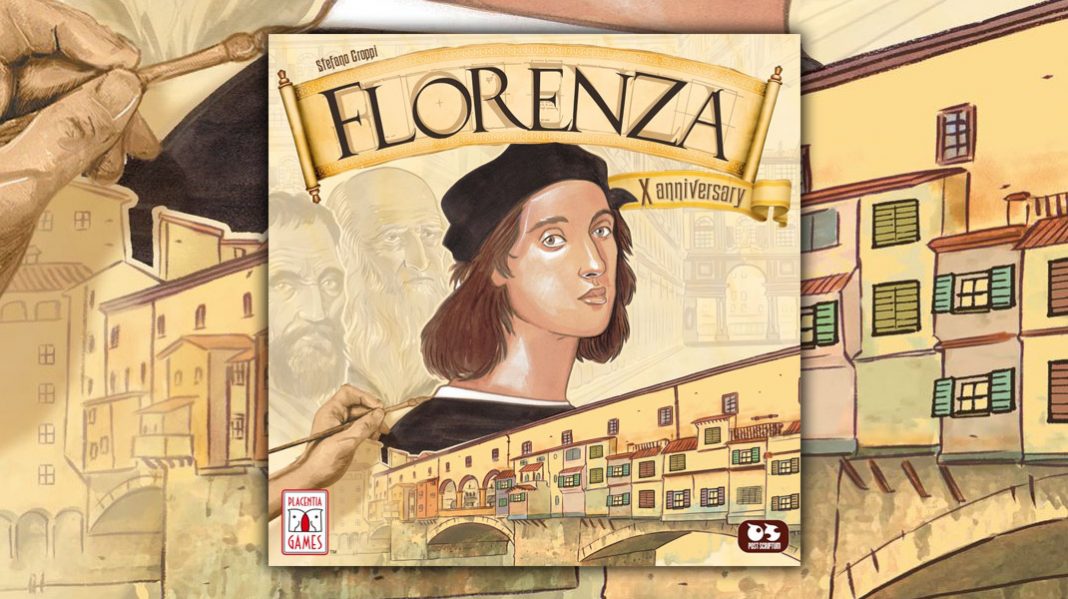 Florenza (now known as Florence, Italy) is often considered the birthplace of the Renaissance. Serving as a center for trade and political power, Florenza was also the culture epicenter of one of history’s most prominent artistic movements.

Taking on the role of a head of one of the city’s most influential and wealthy families, your goal is to define your name synonymously with the greatest art patrons of the day. Commission the work of architecture, paintings and sculptures throughout the city from some of history’s most famous artists. Gather the resources the artists need and supply assistants to help them complete their master works. Hire Captains of Fortune and donate to the church to give you the advantage in this competitive pursuit for contemporary prestige and historical influence. Planning will be key in this challenging, think-y, historical, Euro-style, worker placement game.

Your goal in Florenza is to earn your family the most prestige points. Players do that by establishing workshops that produce valuable raw materials and hiring the most prominent artist.

In typical, Euro-game fashion, there are multiple scoring tracks that contribute to earning your prestige points. You’ll want to carefully plan your ascent up these tracks because each turn, the leader of each track receives valuable benefits such as earning first player, gaining and limiting opponents total workers available, and securing choice artist in exchange for their position on the track.

Players can move up the Church Influence track and Prestige track each round through a variety of different methods such as building workshops tiles, and hiring artists to complete works in both your home district and influential areas around the city.

In turn order, players will make use of their available assistants who can secure resources or establish the intention to build a workshop location. What makes Florenza standout is in its mentally compelling planning process. While placing your workers, you’re simultaneously planning for bigger and better acquisitions and accomplishments. Players won’t receive those resources, build workshops or earn those benefits until later in the round. You often find yourself lost in a mental puzzle where your brain works tirelessly to strategically plan out your attack. Executing your actions becomes an absurd, abstract game of dominoes where any action may be critical to the success of one or all your remaining actions. Failure to properly plan can be brutal. In a game where maximizing your actions is key, being able to squeeze just a little more out of your actions can be a serious difference maker.

When placing your assistants (or Kinsmen), players can do a variety of options such as operate an existing workshop, building a new one, hiring an artist, giving to charity, trading in the market, running your own family business or hiring a captain of fortune. Each option will provide slightly different ways to achieve resources, funding and additional assistants necessary to expand your turn and your opportunities.

Each action has its own rewards and costs. One of the unique actions to the game is that a player can place their worker on an opponent’s workshop, operating it and eventually earning that workshop’s production. In return that player loses a prestige point that is transferred to the opponent who unsuspectingly rented out his workshop. This can be both a positive and negative for both parties involved. While one prestige point may not make the difference in victory or defeat, it can certainly provide a benefit for finishing first on the track for that round.

The game takes place over 7 turns and at the end of each turn, players have the opportunity to receive the Captain of the People and the Bishop depending on their current position on the church and prestige tracks. This is where the slow and the traditional steady question their approach. Slowly climbing either track may never allow you to attain either of these two round bonuses as players are constantly arranging their plans in an effort to finish on top in any specific round. The Captain of the People allows you to define a resource each player receives that round and detain a priest or artist exclusively for your use. Gaining the Bishop allows you to remove one assistant from each opponent’s pool and provide yourself an additional assistant for that round. While stealing from a players pool might seem minimal early in the game, removing an assistant can leave a player at a serious disadvantage later in the game when they’re needed the most.

A few other interesting mechanics employed by the game is the revealing of the priests and artists. Priests are necessary when attempting to give to charity and an artist is hired when building a workshop through the city. Hiring a more expensive Priest or Artist will give you the opportunity to earn additional benefits and prestige points. A limited number of priests and artists are available and they cycle through over the course of the game with each round revealing an additional number of characters previously removed. In addition to the 34 historical artists and 6 priests, players can also use the game’s “el cheapo” characters to serve in their place. These characters cost little or no money and produce negative or very little bonuses.

Far and away, the most standout strategic piece in the game is assigning your workers. Effectively and efficiently placing your workers seems straightforward, but as the game progresses, determining what to pursue, hoping to achieve it before your opponents and securing the necessary funding and resources will definitely challenge your mental capacity. Additionally, by round 3 or 4, you’re likely doing it multiple times each planning phase. I really enjoyed attempting to maximize my turns and keep my personal round goals organized in my mind.

Florenza plays 1-5 players. I didn’t play the game solo, but there is a fairly robust solo system where the difficulty can be adjusted. I enjoyed my 2-player game, but higher player counts is where this gets more cut-throat. Being able to play off each other’s workshops made me question building certain valuable workshops – would I even be able to use them or would my dirty opponents sneak in there before me. Of course, they are all facing that same moral dilemma. Additionally, earning the Captain of the People and the right to play first was really elevated with more people. This is a think-y game and players will be prone to analysis paralysis, so playing with more players can exponentially increase the game’s time length.

Overall, I was fairly pleased with the game’s components. The cardboard and wooden pieces were all acceptable and the playing cards were nice enough. There are a lot of components in this game. This is a warning for players who hate long setup time. I’ve played worse, but there are stacks of prestige points and workshops and tokens that are just going to take a long time to set up. Unfortunately, this will inevitably limit how often this game gets to the table for certain gamers.

The game’s artwork does a decent job of embracing the art of the renaissance and sharing it. I loved seeing the depiction of each famous artist. The board is this sprawling layout with illustrations of the city’s notable locations. While the artwork itself is fine, the overall presentation is very beige and a bit overwhelming. In my mind they would have elevated the artwork with a little more color contrast. Upon first glance, the primary board is a lot to look at. From an aesthetic standpoint, I really appreciate the more abstract approach, but I feel it may have benefited from a little more structure.

I also really struggled with the game’s iconography. It took me a while to get a real grasp on it… which is fine, it happens in a lot of games. But even after getting a good understanding, they’re really small with a lot of detail crammed in and it became a little frustrating to quickly identify. Again, I appreciate the artist’s touch here, but the gamer in me wasn’t very happy.

Finally, learning this game with the guidance of the rulebook is going to be a chore. I highly recommend finding a play through online once you’ve read through it and familiarize yourself with all the pieces. I’m not saying you can’t grasp the game through the rulebook, but it was an uphill climb for me. Now that I understand the game, going back through the rulebook makes a lot of sense, but the terminology, busy presentation and general complexity were hard to get a handle on.

Florenza is obviously a passion project for those involved in the production and this edition is proof there was enough fan-fare to justify a 10th anniversary edition. As an art director and euro-gamer I loved the theme and had a great time playing this game. For those willing to invest both in understanding the intricacies of the game and heart of the competition – there is a lot here to enjoy.

Unfortunately, there is a lot here that keeps me from fully recommending this. Learning this game is going to take some investment. Setup and teardown time could be an issue. It’s very beige (only half kidding there). The biggest question mark for me was the primary game board. Outside of a nod to historical accuracy, I can’t quite understand the separate districts on the board. There were mild distinctions (such as the overall level of benefit when you build), but for me, it all kinda seemed the same. There were a couple places you could play such as the market or giving to charity, but there seemed to be a lot of space for a little payoff. I would have enjoyed it if each district had some sort of unique requirement and payoff.

Another thing that Florenza could have seriously benefited from would have been individual round/phase resource sheets. There is one in the rulebook, but it’s tough to share amongst 4 players. Now there is a comprehensive resources sheet for the game’s workshops. This identifies the cost and benefit and everything you can build in the game. While this seems like a solid addition, it was so overwhelming (small size and tons of info) that I only glanced at it a couple of times.

Despite those hangups, I’m really happy I had the opportunity to play Florenza. I love how challenging it is and the historical theme is really interesting. For hardcore, euro-gamers… Yes, this is a lot of fun. There is a lot of satisfaction when you’re able to chain together a number of actions and ultimately conquer that elusive workshop worth 13 or 14 prestige points. That being said, replay ability is probably fairly low. The time it takes to get it to the table and the circumstances (finding the right gaming group) make this one a challenge in more ways than one. I really want to show this to my gaming group, but in the time it takes to set up and tear down, we could have played a couple more fillers and had some good laughs. Maybe the key is after you’re finished playing, you just sweep the game off the table into a big plastic bag.

I really enjoyed Florenza: X Anniversary Edition – it’s right up my alley, but I would be very hesitant to recommend this. It’s very niche and needs to be in the hands of the right audience who will appreciate what it brings to the table.