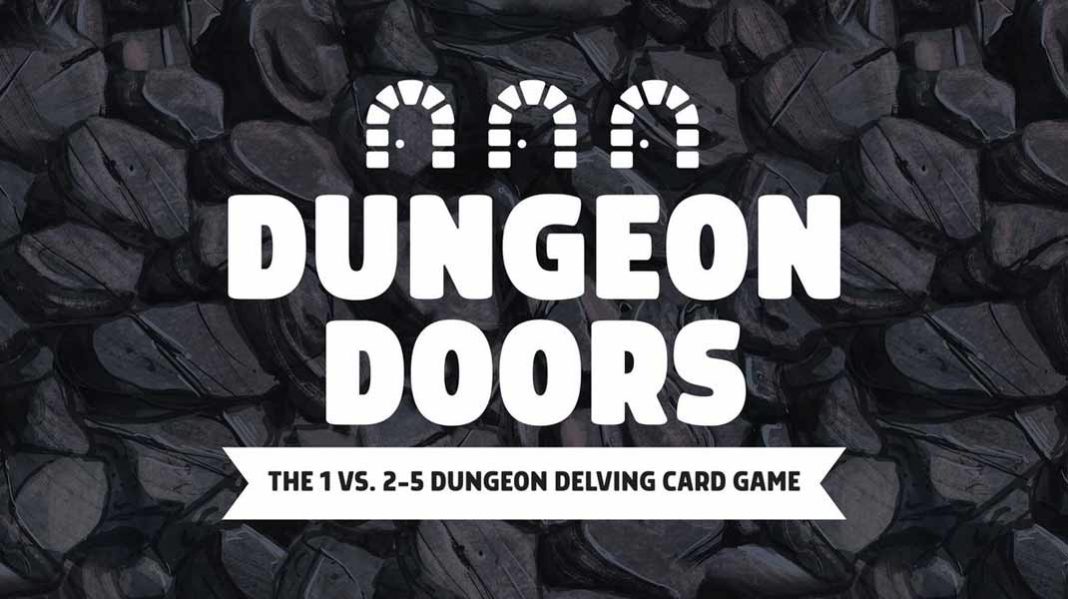 “I told you it wouldn’t work,” growled the half-orc Barbarian to the Tiefling Warlock. The Warlock didn’t know if the look of disgust or the whelps now covering the Barbarian’s face said more about his displease.

“I’m sorry. Let’s try this door.” They made their way through yet another dungeon corridor. As the Warlock’s hand moved towards the handle, he could feel the heat radiating from the door. Maybe it was the sun, maybe they were about to escape!

He opened the door. That wasn’t the heat of the sun. As he looked across the otherwise normal bedroom, the Warlock became aware that his Barbarian companion was about to be displeased again, especially considering that now he’d have burn marks to go with the whelps on his face. In this room, the floor is lava…

Dungeon Doors is a light but fun game if you’re looking for the D&D battle experience in less than an hour. To bring the most fun it helps to be silly and whimsical, willing to role-play and add to what the cards are doing in a story and dialogue, and not merely play to win the game. In fact, if you’re playing for competitive gameplay rather than for the silly experience, this probably isn’t the game for you.

Setup is quick and simple: The heroes draw a hero card which gives them their base character, then they draw any treasures that go with their character. Different characters will have different health, accuracy, attack, and special abilities. The treasures they start with or gather will also contribute to their stats. The Dungeon Master (DM) draws 5 cards from the dungeon deck and then chooses and lays 3 cards facedown, drawing back up to a 5-card hand. The cards represent ominously unlocked doors that the heroes will be bursting through to face the challenges that lay behind them. That’s the setup!

A turn is either going to be: 1) the heroes choosing to open a door on their floor, 2) asking the Dungeon Master to lay out a new floor of 3 cards for them to move to, or 3) the heroes choosing to backtrack to an old floor—which may mean re-facing old dangers—to open doors they left unopened. If the heroes aren’t opening doors and going through rooms, it’s because the players are taking turns in battle, which involves going back and forth rolling dice. A player rolls a d20 for initiative and a d6 for damage, assigns damage, then the dungeon master, then the next character, and around and around this dice rolling goes until someone finally wins the battle by either killing the monster the DM summoned or the monster kills all the characters. This back and forth dice rolling can go on for some time…

The instructions say that the game is a 1 vs. 2–5 player game, with one player playing the DM and the other 2 to 5 playing heroes. However, this game could easily be a 2 player game if one player wanted to play 2 heroes versus the DM.

Most of our games resolved within an hour or so, but if the dice rolls were going badly it could drag on for some time.

The heroes will be different every time and the cards available to create the dungeon will vary every game as you shuffle the deck, which has plenty of cards. It’s unlikely you’ll see the same cards two games in a row, so you’ll always have interesting new sets of challenges for the heroes to face.

The game comes with a deck of cards with hero cards, treasure cards, dungeon cards, and “Big Bad” cards, as well as a d6 and d20 dice.

The game is a deck of cards and a little instruction booklet. The Dungeon Doors 101 is a poster-sized fold-out that has very simple instructions as it teaches you the game through a pre-set deck of a few cards. Once you’ve learned the game, there isn’t much to the rules. The instructions acknowledge the simplicity of the game and encourage D&D style imaginings and role-playing as you play through the game.

The art on the cards is all over the place from cutesy to more serious in its depictions of creatures, traps, and items to be found. The flavor text likewise goes from a plain description to attempts at cheesy humor, which sometimes gets a little chuckle.

This game really could have used a pawn or something to mark what room the heroic party is supposed to be in as they move through the dungeon. We actually added a generic pawn for that express purpose.

This game could be a good time killer for anyone who enjoys Dungeons and Dragons but wants a short experience without all the effort of creating a story and everything else that goes into preparing to be a Dungeon Master.

A strategy game this is not. If you’re playing to test your skill, or even try to win, this is not the game for you. This is mostly a game of rolling a single die over and over to loosely determine a storyline and battle outcomes. It’s a non-strategic dungeon crawl, more focused on silly cards than actual gameplay. There are special abilities, sure; but there’s nothing in the way of dice mitigation, strategy, or personal ability to influence the outcome of the game. The DM is stuck with what they draw from the deck to play and the heroes are essentially facing a more or less random dungeon that the DM is placing. If you’re playing to see who wins you may as well just roll a D6 or D20 and see who gets the highest roll and call that the game.

…with the lava behind them, our heroes stood before three doors. Where would they go? The Barbarian looked hopelessly at the Warlock, but the Warlock boldly opened the center door without hesitation. Before them lay a sleeping dragon. Smoke came from its nostrils as it dozed. The heroes sucked in their stomachs and began to make their way around the edge of the room until the Barbarian felt something round beneath his feet. He looked down. He had stepped on the dragon’s tail. The dragon’s head whipped around and the teeth took off the head of the Barbarian, leaving the warlock alone next to the decapitated body of his friend. But he didn’t mourn for long, as moments later the dragon’s tail spikes ran through his heart. Somewhere, the sinister master of the dungeon smiled.

I want to be clear: I don’t think this is a badly designed game or that it’s poorly executed. It’s just not a game for me. I like the idea of D&D, but I never really enjoy the implementation. Rolling the dice over and over again became tiresome and boring. I felt no personal investment because I felt I had no actual influence over my destiny.

Yet my boys love the game and continue to ask to play it over and over again, with me as the DM and them as the heroes. They love the tension of opening doors, exploring, making little decisions, making up little stories, and yes, rolling the dice over and over again.

I think there is an audience (besides young boys) who are going to get a kick out of this game and be glad to have it around to kill an hour on occasion. It won’t be a favorite necessarily, but it will be there for some fun times when time is short. The crowd that will love this is the crowd that’s going to go all-in, tell a story with it, and enjoys the silly tension of seeing what the dice roll is and imagining the battle, and seeing an outcome. They aren’t playing to win. They’re playing to see what happens and enjoy the interactions and role-playing with one another as they do.

For me, however…well, I’ll still be playing this for the foreseeable future, but I have to admit, it’s not because I want to.